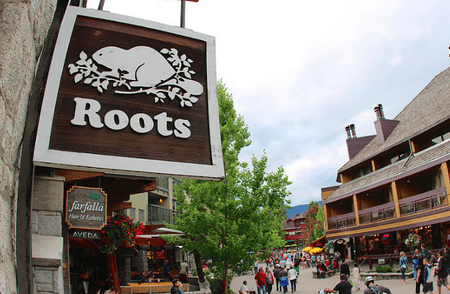 Roots Canada, commonly referred to as ‘Roots’, is Canada‘s iconic casual and athletic apparel brand selling everything from men’s, women’s and baby’s clothing to leather goods, yoga wear, accessories and even home furnishings.

Roots was started in 1973 by Michael Budman and Don Green — both USA natives and Detroit locals. Both attended Camp Tamakwa in the Algonquin Park, Canada. Michael spent his summer here as a counselor, canoeing instructor and camp director for over 13 years, and Don was both an attendee and staff member in the 1960s. The camp became their inspiration for an athletic brand that would take the country by storm.

After Don and Michael attended Camp Tamakwa, their love for Canada and its mesmerizing nature became a driving force behind Roots and its creation. In 1969, after falling in love with Canada while spending many years at Camp Tamakwa, Michael moved to Toronto where he taught history at a local high school; Don made the move shortly after in 1972. About a year later while in Algonquin Park together, Don and Michael had an idea for an Algonquin-inspired footwear brand.

They decided together that it would be based on their love for Camp Tamakwa, Algonquin Park and Canada’s wilderness. In the spring of 1973, Don and Michael continued working on their idea for their company and searched for a name suitable to their concept, until Don, who was browsing through a friend’s biology book, saw the word ‘roots’ jump out at him from the page. He turned to Michael saying, ‘your feet really are your roots, as they’re connected to the ground like a tree is.’ And so, Roots Canada, a wilderness-inspired footwear company, was born.

The Roots logo, designed in the 1970s by leading graphic artists Heather Cooper and Robert Burns, featured Canada’s iconic animal, the beaver. Coincidentally, Heather and Robert came up with this design without knowing that a beaver appears on the logo of Camp Tamakwa, the place that had such a great influence on Don and Michael. 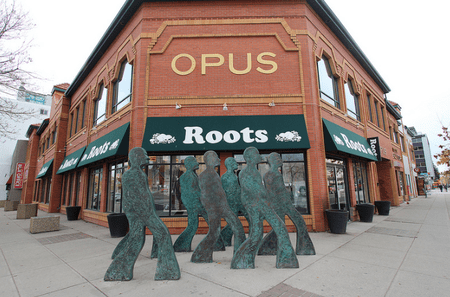 Roots opened its first store in August 1973, selling Negative Heel Shoes made by the Boa Shoe Company. A couple months later, Roots purchased the Upin and Ipin Company, opening their first leather factory in Toronto. By the end of 1973, Roots had expanded to more locations in Toronto, Vancouver, Montreal and a few other stores in the United States. By the next year, Roots went from making 30 pairs of shoes a day to 2,000 per day. With such success as a company, Don and Michael decided to expand roots to clothing and apparel that would emphasis casual wear, comfort and durability. By 1977, Roots had over 65 stores across North America and Europe — they decided to transition from making their famous Negative Heel Shoes to wedge shoes and leather handbags. These leather goods became so popular that Roots began selling these wholesale to big names like Nordstrom and Holt Renfrew.

In 1979, Roots expanded again, adding their ‘Roots Design’ line featuring men’s tailored clothing. In 1980, Roots’ success in Canada shot through the roof, expanding throughout the country. In response to this expansion, Roots started to produce their famous t-shirts and sweatshirts laid with the Roots logo under the name ‘Beaver Canoe’, a venture that involved a canoe building operation with the co-founder Camp Tamakwa. Under this new label, Roots developed their apparel and outdoor gear line, launching aj athletics label two years later under the name ‘Roots Beaver Athletics’. Over the course of decades, Roots has gone from a small-time shoe maker to a fierce competitor in an otherwise difficult industry, setting the company apart as a leader in the retail industry.

Roots has made it their mission to support environmental issues and respect the environment, help with literacy campaigns, support local businesses and promote a healthy lifestyle all the while putting out a quality product made with Canadian craftsmanship. The company has worked with many environmental groups like the Canadian Wildlife Federation,Environmental Defense, Friends of the Earth, the Evergreen Foundation and the World Wildlife Fund, and its co-founders have received many awards for their dedication to these principles.

What started as a tiny store on Yonge Street has evolved into an icon in the athletic apparel world, with over 120 locations in North America and 40 in Asia. In 2006, Roots opened an eco-friendly yoga studio in Toronto just blocks from the original store that opened in 1973. Roots has continued to have success as a popular name not only in the area of fashion, but in the realm of environment, nature and wilderness.