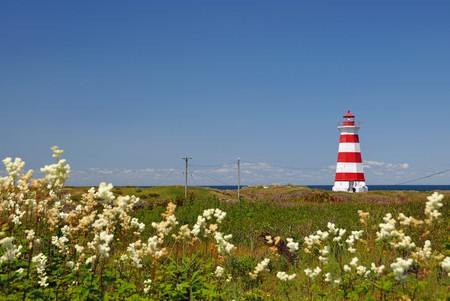 One of Nova Scotia‘s best-kept secrets, Brier Island is remote island at the westernmost tip of the province. It is well worth the two-hour scenic drive from Digby including not one, but two car ferries. Brier Island packs in everything that makes Nova Scotia great: stunning coastal scenery, seabirds, a small fishing town, fresh seafood, and friendly locals. It’s also home to some of the most exciting whale watching in Canada, and the columnar rock formations along the coast beg to be explored. Whether you’re looking for an active holiday or a relaxing getaway, here are some reasons to put Brier Island on your itinerary.

The waters around Brier Island consistently attract five different species of whales, including the playful humpback and the rare Atlantic Right whale. There are two whale watching companies on Brier Island, Brier Island Whale & Seabird Cruises and Mariner Whale & Seabird Cruises, with tours that leave throughout the day. Relax and take it easy on a Cape Islander-style boat with an onboard washroom, or bundle yourself into an orange survival suit and jump aboard a fast-moving Zodiac raft. Visitors are often treated to a performance by the humpbacks, launching themselves out of the water and engaging in all kinds of playful antics, so be sure to take your camera to capture these huge mammals at play. Guides can often recognize whales by the pattern on their tails, which is unique to each whale (similar to a human fingerprint). 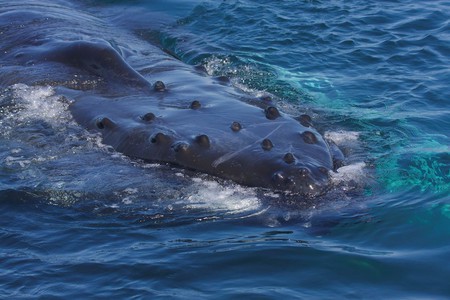 Exploring Rock Columns on the Coast

Brier Island’s coast is geologically unique, along the southwest shore of the island, tall, polygonal columns of rocks cluster together looking like miniature skyscrapers. The flat-topped columns are perfect for adventurous visitors to hop their way along the coast. This stunning landscape was formed by an ancient volcano (which also had a hand in forming Brier Island itself). As lava erupted from a rift in the earth’s crust, its flow created an undersea mountain range along Nova Scotia’s shore. The rock columns were formed when pools of hot lava shrank as they cooled. Because of the slow cooling, the hardened lava pulled apart evenly, forming the rock columns that can be seen on Brier Island today. Venture out at low tide to explore the rock columns and the tidal pools, and watch how they disappear into the water as the tide comes in. 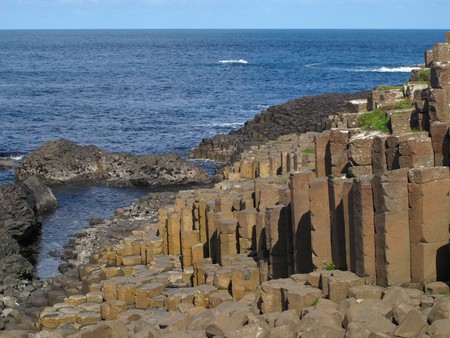 Lighthouse fans rejoice: there are three lighthouses on Brier Island, each unique in its own way. As you arrive on the ferry, look to the left to spot Peter’s Island Lighthouse on a speck of land between Long Island and Brier Island. Known as the ‘Pillar in the Passage’, it makes a great subject for photos (especially from the Joshua Slocum Monument site). The second lighthouse on Brier Island is the third oldest in Nova Scotia, West Lighthouse, located at the westernmost tip of the province. Watching the sunset from this red and white striped lighthouse is a must-see sight for visitors and locals, alike. As the sun sets over the water, you’ll be sitting on the last place its warm rays touch the province. The North Lighthouse, formerly known as the ‘Grand Passage Lighthouse’ stands on Brier Island right where the Sea of Maine becomes the Bay of Fundy (famous for the highest tides in the world). Sit on a nearby picnic table and enjoy the view of the Bay of Fundy from this lighthouse. 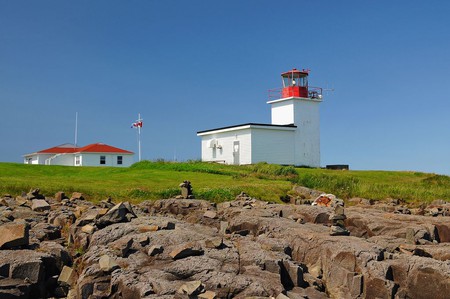 Getting Active on Hiking Trails

Taking a drive out to admire the coast or the sunset is great, but if you want to get active on Brier Island, leave the road and find a hiking trail. Hikers can sample several landscapes all in one day: coast, forest, bog, meadow, and beach. Try the Nature Conservancy of Canada’s Coastal Trail starting from the West Lighthouse, which leads through a seagull nesting area (watch out for protective seagull mothers squawking and swooping), along the rocky coast, and ending at Pond Cove, a large sandy beach perfect for finding rocks and shells left behind by the tide. You’ll have to share it with the sand pipers and gulls, though. The hiking trails on Brier Island are mostly made from ATV tracks and aren’t maintained, except by the feet of other hikers. The Coastal Trail is the only trail on Brier Island marked with panels, and it is partially graveled. Bring proper hiking shoes and be prepared for muddy or slippery conditions after it rains. Trails are easy to follow, when in doubt, head out to the coast and follow it until you reach a lighthouse. 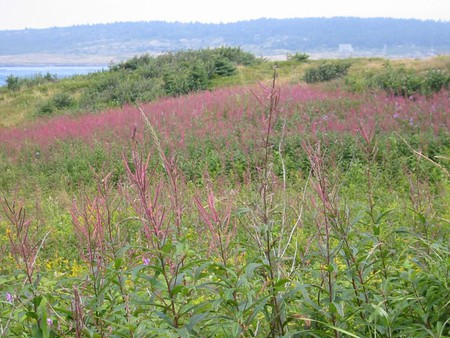 The village of Westport on Brier Island is a fishing community, which means any restaurant you choose is going to have super-fresh seafood. Try some of Digby’s famously large scallops or nosh on a tasty lobster roll. You’ll find fish and chips on every menu, or you can branch out and try a Nova Scotia classic, fish cakes. There are only two restaurants on Brier Island, one is the Brier Island Lodge Restaurant, which has a panoramic view across the Grand Passage. The Lighthouse Café in town is near the water; get your meal to go, and head across the street to a picnic table overlooking Peter’s Island. It’s free for pedestrians to cross the ferry to Long Island, which is where you’ll find Lavena’s Catch Café. Famous for their seafood dinners, egg tarts, and for being featured on You Gotta Eat Here! Lavena’s has low-key homestyle food that won’t disappoint seafood lovers or landlubbers. 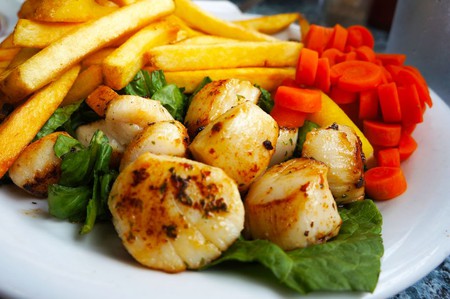 Visiting a Colony of Seals

Not all of the animals who visit Brier Island spend their time in the water. Head north on Brier Island to reach the North Lighthouse, park your car or bike, and take the path on the left of the Coast Guard Station to reach Seal Cove. Make sure you go at low tide so you can see a colony of large, noisy harbor and grey seals enjoying themselves on the rocks. You’ll hear them before you see them, they’re vocal and aren’t shy about defending the rocks they flop themselves onto. They often push each other off the rocks, and generally make a racket. Be sure you don’t make too much noise yourself, as the seals scare easily. Once they slip into the water all you’ll see is their heads poking out. 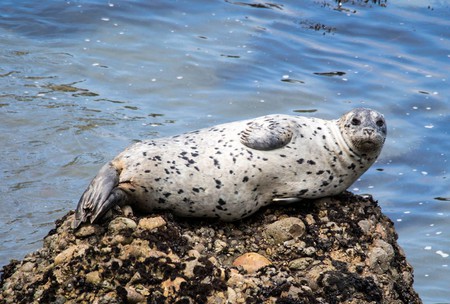 Besides things that swim in the sea and sun themselves on rocks, Brier Island is home to plenty of creatures that fly through the air with the greatest of ease. Seabirds can be seen all year round, but during winter migration Brier Island is one busy place, its location makes it a perfect stopover for tired fliers. The island is what’s known to birders as a ‘migrant trap’ or in human terms, a ‘well-timed rest stop’. Over 300 species of birds have been observed on Brier Island, making it a premier birding destination in Nova Scotia. Tourist season might come to an end in the fall, but that’s when hawk tourist season on Brier Island is just getting going. The late September fall hawk migration on Brier Island is especially impressive, with hawks practically clouding the sky. They don’t stay for long, so catch a glimpse of them between the end of September and beginning of October. 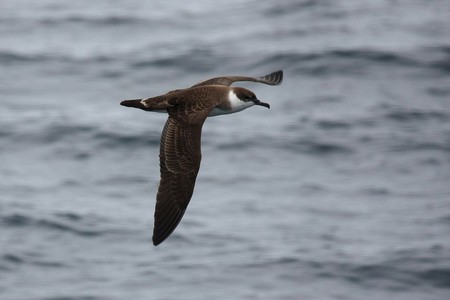 Thanks to the many shipwrecks in the area, searching along the piers in Westport reward patient low-tide searchers with shiny souvenirs. Known as ‘seaglass’ busted glass, porcelain, and ceramic from shipwrecks is ground into smooth pebbles by the sand and the tide. When it washes up on shore, they are like tiny sparkling jewels amidst the rocks. Head down to the shore during low tide in Westport to hunt for your original (free!) Brier Island souvenir. Keep your colorful finds in a collection, or make into a decoration or jewelry. The gift shops in town sell seaglass, but it’s way more fun to find your own. 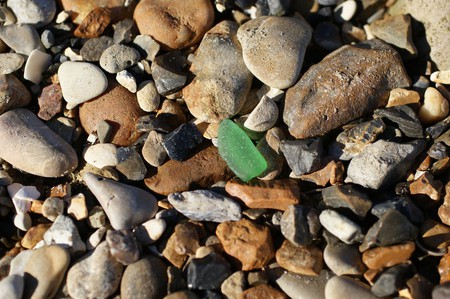 Seaglass | © Andrew Writer
Give us feedback