There are hundreds of breweries in Canada. Craft beer lovers in Toronto unite every October for Bar Volo’s annual Cask Days. This three-day festival includes more than 150 breweries from North America and the United Kingdom, as well as over 300 cask ales. With so many beers and breweries to choose from, join the craft beer journey across Canada and discover some of the most creative breweries. 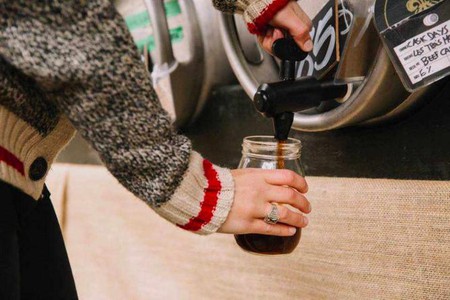 Upstreet Craft Brewing won the hearts of many at Cask Days with their Grave Digger Pumpkin Ale, a seasonal release. Gravedigger had a malt-forward taste that when combined with all-spice and pumpkin pie filling flavors created a perfect pumpkin ale. A relatively new craft brewery from Prince Edward Island, their flagship beers include a Czech-style pilsner, an American pale ale, a rhubarb witbier, and a white IPA. Unfortunately, you’ll have to venture to Charlottetown to try any of Upstreet’s beers; they are working on distribution in other provinces.

What is more Canadian then a rye and ginger? Tatamagouche Brewing Company’s ode to a Canadian mixed drink classic won them points for creativity. Created in 2014 in Tatamagouche, Nova Scotia, their North Shore Lagered Ale won bronze in the Kolsch category at this year’s Canadian Brewing Awards. If seasonal beers like Maple Squash Ale, and Oyster Cloister Oyster Stout entice you, it’s worth a trip to the Maritimes. Their craft beers are only available in specific sizes at their store.

A great northwest pale ale entry. Howe Sound Brewing Company from Squamish, British Columbia, showcases what British Columbian craft breweries are capable of with SkyPilot Pale Ale. The aromas of citrus, caramel malts and floral hops are emphasized in the taste. Sound intriguing? Howe Sound Brewery uses local ingredients to create their ales, and reuses ingredients and bottles so that the brewery has zero effect on the environment. With year-round brews like Garibaldi Honey Pale Ale, Rail Ale Nut Brown, and Total Eclipse of The Hop Imperial IPA, it’s no surprise that this is an award-winning brewery. Some of their beers can be found in LCBOs in Ontario and throughout British Columbia. 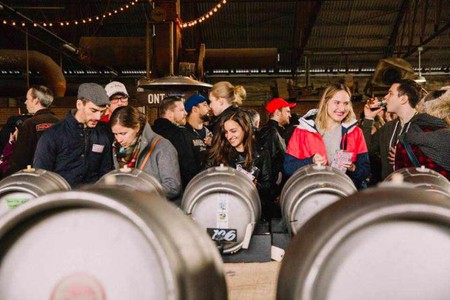 Vancouver’s Parallel 49 Brewing Company wins big with this northwest wheat ale. The aroma of citrus is echoed in the taste while the bitterness of the hops adds complexity. Created in 2008, this brewery has become a popular hangout. Their four year rounds include Tricycle, a grapefruit radler, and Craft Lager, a Munich helles. Seasonal favorites like Salty Scot, a sea salted caramel scotch ale, and Apricotopus, an apricot sour wheat, has left Vancouver beer lovers coming back for more. Some of their beers are available at LCBO, but their finder is the easiest tool for finding Parallel 49 in British Columbia and other provinces.

At 10.5% ABV, this is a strong beer. The only brewery from Alberta to be featured in this article, Big Rock Brewery’s Kentucky Kicker blends the perfect amount of maple, bourbon, and vanilla sweetness. It becomes an instant reflex to find out what other styles of beer Big Rock brews. You will not be disappointed with the selection; Big Rock brews ciders and adds their own twist to traditional beer favorites. Their beer is available in most provinces, which you can check for on their website or visit one of their breweries located in Calgary or Vancouver. 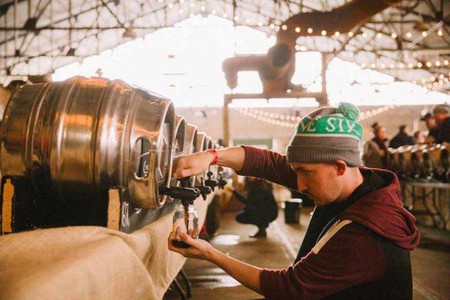 Ever wonder what it was like to be a voyageur? You will never know but at least this New World Pilsner tries to evoke those emotions. The taste of Balsam Fir helps to elevate the sense of earthiness that this beer presents. Brasseurs du Monde from Saint-Hyacinthe, Quebec is a world award-winning brewery. Some of their beers include L’Infusée, a white beer infused with green tea, and Célébrante, a blonde ale fermented in champagne yeast. Brasseurs du Monde is available in multiple locations in Quebec. Find out where you can grab some of their brews online.

Sorry vegetarians and vegans, this brew is not for you. Brossard, Quebec’s Les Trois Mousquetaires Beef Cake Mockery is flavored with beef stock, mostly apparent in the aftertaste. It was interesting enough to warrant an exploration of the other beers created by this brewery. They have won several world beer awards for their Porter Baltique, among some of their other beers. Available in south western Quebec, their online tracker will let you know where you can get your hands on a brew.

Amsterdam Brewery is beloved in Toronto; trying one of their classic beers like All Natural Blonde or Boneshaker Unfiltered IPA is a right of passage. Amsterdam beer can also be found at most LCBOs. The brewery is located in Leaside and their BrewHouse is located on Toronto’s Harbourfront. The latter explores small batch beers with their Amsterdam Adventure Brews releases. The Amsterdam selection at Cask Days really highlighted the breweries’ creativity. Aging beer in Cabernet Barrels? A stout flavored with chocolate and chilies? Yes, please! 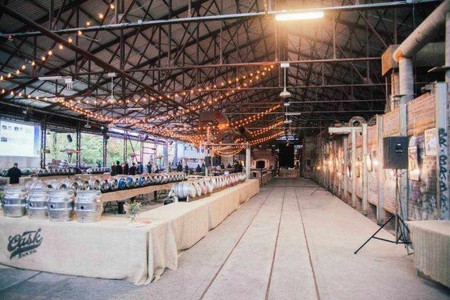 Beau’s All Natural Brewing Company (ON)

Beau’s All Natural Brewing Company, or simply referred to as Beau’s, is now Canada’s largest craft producer of organic beer. Their märzen is a great fall classic: a perfect blend of malts and hops. Its medium carbonation creates a smooth drink and crisp finish. Located in the Ottawa Valley, this brewery tries their hand at many styles of beers. Their new releases happen often with each being bottled in 600 milliliter glass bottles. With beers called Wag the Wolf, The Bogfather, and Smokin’ Banana Peels, you know Beau’s is constantly trying to create new beers with unique flavors.

Did you ever imagine you’d have a beer flavored with ice wine and Muscat grapes? Created in 2012 in Ottawa, Big Rig Brewery’s Bock Me Gently does just that. Lightly sweet with some very slight hop flavor, this is a great introduction to a brewery with potential. Beers on tap at their brewery in Kanata, Ontario, include Double Chocolate Milk Stout. Your best guess at trying any Big Rig beer is at one of their three stores in Ottawa. If you’re lucky, Big Rig Gold can be found at LCBOs. 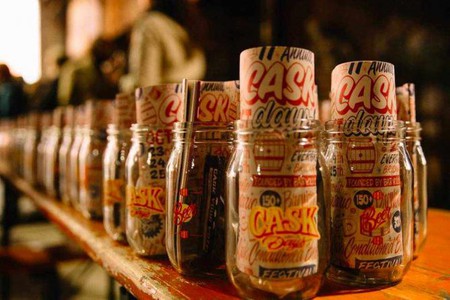 Forked River’s Ich Bin Nein Berliner was one of the best sour beers at Cask Days. This sour rye saison was by no means a quick beer to finish. It maintained sourness throughout and had hints of spiciness from the rye. The uniqueness of this beer only highlights some of the other beers created by this London, Ontario Brewery. With several of their prior releases having been aged in different wine varietal barrels, the excitement over their new releases is understandable. You can purchase their beers at their retail store or check LCBO online for a location near you.

Opened in 2012, Indie Ale House is a local watering hole in the Junction, in Toronto. With four flagship beers and multiple rare releases, it’s exciting to see what new flavors will be released. Whether it’s an IPA with tropical fruit flavors like Couch Surfer or a sour ale like Dead Spadina Monkey, Indie Ale House is creating a stir in the local Toronto craft beer scene. A perfect fall beer, the Maple Cinnamon Wit tasted like a liquid cinnamon bun. Want to try one of their beers? Visit their retail store in the Junction.

Muskoka Brewery was started in 1996 and almost 20 years later, people are still talking about their cream ale. Beyond the cream ale, Muskoka is also known for their seasonal releases and hop-heavy beers. The Rogue Reaper was a smooth beer with a good complexity and mild hop flavor; a good introduction beer to the hoppy-ness Muskoka has gained a cult following for. If you are a fan of hoppy beers, try Muskoka’s Detour or Mad Tom IPA. You will not be disappointed. Grab some brews at your local LCBO or at most bars in Toronto. 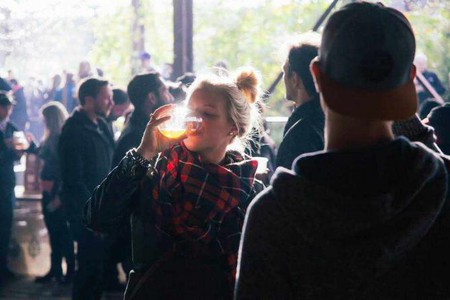 Located in downtown Toronto, Spearhead Brewing Company was given the title of ‘One of Ontario’s most inventive brewers’ by Post City. The beer was tasty and smooth although the flavors of walnut and smoke could have been more accentuated. Spearhead is well known for their Globetrotter Series which includes Hawaiian style pale ale, Moroccan brown ale, Belgian style stout, and India white ale. Lucky for Ontarians, Spearhead beers can be found throughout the province. Check out places near you on their Find Our Beer page.

Despite being several months old, High Road Brewery is making big waves in the Niagara region craft brewery game. Their Bronan has a full hop flavor which is also evident in the aroma; an unmistakable Vermont style IPA. High Road Brewery can be found brewing in small batches at the Niagara College Brewery, although their beers can be found around Ontario like at The Craft Brasserie & Grille in Liberty Village, Toronto, or Hungry Brew Hops in Newmarket.