12 Reasons You Should Visit Manitoba 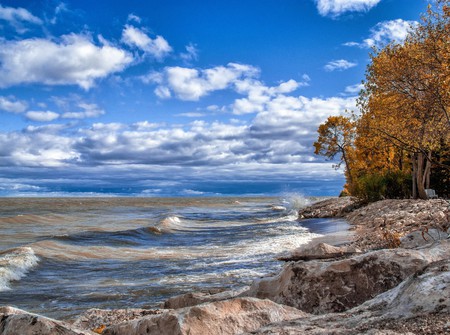 Canada’s central province, Manitoba is primarily known for being home to the polar bear capital of the world. But there’s a lot of other enticing attractions in the region, such as its many beautiful lakes, its world-class museums, and its unique festivals. Here are 12 reasons to visit Manitoba.

See polar bears in the wild

Located on the shores of Hudson Bay, Churchill is a remote subarctic town where you can witness polar bears and beluga whales in their natural habitat. It received its title of the world’s polar bear capital because thousands of them journey through the town annually when they return home to spend their winter on Hudson Bay’s frozen tundra. The best viewing times for polar bears are October and November. While in Churchill, make sure you visit the York Factory National Historic Site too.

Located in Thompson, in an isolated area of northern Manitoba, the Spirit Way is an award-winning 2.5-kilometer (1.6-mile) trail linking the Heritage North Museum and the Miles Hart Bridge. It is a designated Manitoba Star Attraction due to the “16 fascinating and scenic points of interest, with historical, cultural, geological, industrial, and artistic perspectives.” There are viewpoints, sculptures, murals, parks, and bridges to enjoy along the way.

Winnipeg is the capital of Manitoba. Some of the city’s top attractions include The Forks, which has everything from marketplaces to museums to National Historic Sites, the Musée de Saint-Boniface (Winnipeg’s oldest building), and the Royal Canadian Mint and its state-of-the-art manufacturing facility. There is also the Winnipeg Art Gallery, Assiniboine Park and Zoo, and the Manitoba Legislature Building (built in the Beaux-Arts Classical style). In winter, take part in tradition and skate along the world’s longest natural frozen skating trail on the Red and Assiniboine Rivers.

Located 45 minutes south of Thompson, Pisew Falls is Manitoba’s second largest waterfall. There are viewing platforms and a suspension bridge at the 13-meter-high (43 feet) falls. Following on from the bridge, people can hike a 22-kilometer (14-mile) loop to Kwasitchewan Falls, which is Manitoba’s highest waterfall. And for the adventurous visitors, there’s backcountry camping at the falls!

Seeing the Northern Lights dance across the sky is what brings many people to Canada in winter. The northern territories, including the Yukon and Northwest Territories, are popular places. But Churchill is actually considered one of the world’s top three spots, as it sits below the auroral oval. Peak viewing time is January to March. Other more southerly locations to view the lights include the towns of Flin Flon and The Pas.

Enjoy a festival or two

Travel Manitoba describes Riding Mountain National Park as an “island of wilderness surrounded by a sea of farmland.” It’s one of only five Canadian national parks with a resort townsite. Located on Clear Lake, Wasagaming is home to artisan shops, a golf course, tennis courts, and North America’s largest log cabin theater. Visitors will find a variety of trails and animals within the park, including black bears, moose, lynx, and elk.

Tomorrow is Moonlight Madness and we are getting anxious to see the townsite full of people! Which activity are you going to do first? Don't forget about our pub crawl starting at 5pm! ✨See you tomorrow!

Yes, Manitoba has lakes, frozen tundra, the prairies, and a desert. Spirit Sands is a four-square-kilometer (1.5-square-mile) area within Spruce Woods Provincial Park, which has sand dunes that tower 30 meters (98 feet) above its prairie surroundings. The park is home to four unique Manitoban species: the northern prairie skink, the western hognose snake, and two species of cacti. Spruce Woods’ other highlights include Devil’s Punch Bowl and the backcountry trails for mountain biking and horse riding in summer and cross-country skiing in winter.

Be impressed by the Canadian Museum for Human Rights

The Canadian Museum for Human Rights in Winnipeg is the “first museum solely dedicated to the evolution, celebration, and future of human rights.” Current exhibitions at the museum include Freedom of Expression in Latin America, Points of View, and Truth and Reconciliation. The museum’s unique architecture—which dominates the city’s skyline—is just as well known as the important information inside.

Tag us in your pictures of architecture from across Canada! 🇨🇦 – From @cbcmanitoba: Between light and shadow. The illuminated alabaster ramps @cmhr_mcdp always leave one in awe. Wonderful capture by @joelboily. #lovecbcmb #lovecbc #cmhr

Hit the slopes at Asessippi Ski Area and Resort

Asessippi Ski Area and Resort is the prairies’ largest ski area. It lies near the Saskatchewan border, and it’s closer to Regina than it is to Winnipeg (three versus four hours of driving). The resort has 26 downhill runs, three lifts, two terrain parks, a large tubing area with a magic carpet, and it recently added dog sledding to its list of winter activities. For adrenaline junkies, there’s also the option of going snow biking or kiteboarding on the slopes with Asessippi Kiteboarding. There’s a food court, pub, rental shop, and gift store at the resort as well.

You may not want to leave Manitoba when you realize that it is home to 100,000 bodies of water. Lake Winnipeg is by far the largest, stretching over 24,514 square kilometers (9,465 square miles). On its eastern shore is the province’s most frequented beach, and one of North America’s best beaches—Grand Beach. Some other favorite lakes to visit in the summertime include Clearwater Lake, Falcon Lake, Lake Manitoba, Little Limestone Lake, and Birds Hill Beach.

Quiet and serene on the shores of Lake Manitoba. Captivating photo taken at Delta Beach by @katiemirrleesphotography! #exploremb #explorecanada

The Canadian prairies are Alberta, Saskatchewan, and Manitoba. They were given this term as they each have flat areas partially covered by grassland, or prairies. Explore and learn more about Manitoba’s prairie region at Fort La Reine Museum. Located just over an hour’s drive west of Winnipeg, the museum is “dedicated to preserving the heritage of the Canadian prairies.” It includes 28 heritage sites (homes and buildings), which not only illustrate the evolution of the prairie lifestyle and communities but also house many displays and artifacts.