11 Music Festivals in Canada Worth Traveling For 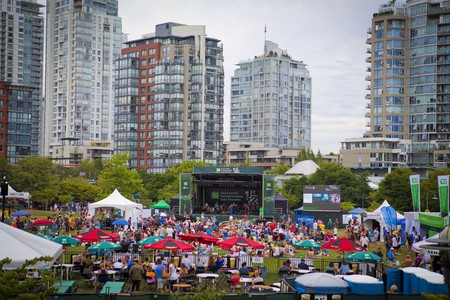 The United States isn’t the only country that has epic music festivals every summer. Canada is home to NXNE (the opposite direction but similar setup to SXSW) and Osheaga, which is the country’s version of Coachella, and also has some lesser-known, but nonetheless amazing, music festivals that are worth a trip.

The largest multi-day outdoor festival in Atlantic Canada, the Cavendish Beach Music Festival attracts more than 70,000 visitors annually. It’s all about country music in Cavendish on Prince Edward Island, which has hosted some of the biggest names in country music over the years. Past performers have included Keith Urban, Taylor Swift, Tim McGraw, Rascal Flatts, Reba, Blake Shelton, Lady Antebellum, and Kenny Chesney. It’s definitely a festival worth traveling for if you enjoy country classics.

Folk on the Rocks

Voted one of Canada’s top 10 music festivals, Folk on the Rocks’ Yellowknife location means it doesn’t garner an audience like Toronto-based festivals. Located on the shores of Lost Lake, the annual music festival’s biggest drawcard is that it’s the largest party under the midnight sun. Folk on the Rocks features over 24 hours of programming, a kid’s area, a beer garden, a food fair, and an artisan market where visitors can purchase Northern creative artwork and more. The headliner in 2017 was Canadian favorite, City and Colour.

Located in picturesque Nicola Valley—just outside the town of Merritt in beautiful British Columbia—Bass Coast Festival is an “independent international exhibition of electronic music and art.” The inclusive festival, founded in 2009, is an artist-owned and operated event. It’s both a platform for Canadian artists and international talent. Alongside the music, Bass Coast also has artist installations, a spa for all kinds of pampering, and movement and brain workshops.

"More so than a “rave” or a “transformational festival,” Bass Coast is a collective that showcases both local and international talent in a safe, supportive space. It is a place where artists are encouraged to display and share their hard work without fear of judgment." Be sure to check out @magnetic_magazine's heartfelt recap of Bass Coast Festival 2017 📷 @concertsocks #basscoast2017 #space #takemebacktobasscoast

Known as Canada’s greenest festival, Evolve has many established eco-friendly choices in place. The annual festival, held in Moncton in New Brunswick, says it is a summer celebration of music, culture, and social awareness. It not only hosts world-class international performers, but it also hosts workshops to “inform spectators about social issues such as personal well-being and environmental awareness.” Some of the recent performers have included Australia’s Xavier Rudd, Coleman Hell, Sam Roberts Band, and Arrested Development.

The countdown is ON! 10 Days until we all go home!! So many amazing vibes to be passed around! All of our incredible family in one place at once!! Happy Evolve!!

The Sound of Music Festival is a part of Burlington, Ontario. For nine days, music permeates throughout the city’s downtown area. It is the region’s largest music event, which hosts both new and emerging artists, as well as today’s most popular performers. Some of the festival’s best events include the Grande Festival Parade, Sound of Music Club Series, Downtown Streetfest, Children’s Village, and free concerts on Father’s Day weekend. Over 200,000 people visit the festival every year.

“A new luxury festival with a familiar feel, Dreams is a two-day, three-stage, outdoor, sensorial celebration of Toronto’s music and arts community.” Dreams Music Festival happens at RBC Echo Beach, on the shores of Lake Ontario in downtown Toronto. It’s a boutique electronic music festival for people aged 19 and over. The four headliners in 2017 were Above & Beyond, Dillstradamus, DVBBS, and Steve Angello. There are three stages, plus a games area (complete with ball pit), a food court, and a chill zone.

A lesser-known music festival, located in the small town of Salmon Arm in British Columbia, the Salmon Arm Roots and Blues Festival is celebrating its 25th year in 2017. The festival attracts visitors from across Canada and the Pacific Northwest, who enjoy the eclectic music on offer. Blues, Celtic, Americana, and Afrobeats music are all featured at the Roots and Blues Festival. The 2017 event features Grammy and Juno Award winner Alex Cuba, Canadian Celtic guitarist Andy Hillhouse, and Edmonton’s Altameda.

Boogie Patrol: Travelling across the Rockies from Alberta, the Boogie Patrol will be bringing there fresh, contemporary blues style to the Festival. Guided by vocalist and harmonica player Dan Shinnan, the group inspires audiences with its unique blend of blues, rock, soul, and funk. Buddy Guy's guitarist, Ric Hall, says, "Boogie Patrol is off the hook…they're on fire!͟ Making this Canadian group an act festival goers will not want to miss out on.

Halifax Pop Explosion is an “annual festival that presents over 150 artists, comedians and speakers, in more than 15 venues across the city.” Located in Nova Scotia, the music festival and conference has a tradition of hosting some of the best new and emerging artists from across Canada and the world. Some of the artists performing in 2017 include Charles Bradley & His Extraordinaires, Charlotte Day Wilson, Japandroids, and Clairmont the Second.

We've added some incredible acts to #HPX25 check it all out on www.halifaxpopexplosion.com and buy those Earlybird Wristbands! ✌️️❤️😇

Riverfest Elora is an annual celebration of community and music. While it began as a backyard festival in 2009, it now attracts some of the biggest names in music across North America to Ontario’s most beautiful village. The 2017 lineup includes MGMT, Mother Mother, USS, Monster Truck, and Gogol Bordello. Riverfest Elora is also home to an artisan alley and plenty of food and drink vendors.

Many of Canada’s larger cities host an annual jazz festival. But the Vancouver International Jazz Festival goes on for 12 days and attracts more than 500,000 jazz enthusiasts every year. The festival brings together a staggering 1,800 artists for 300 concerts across 35 sites. Some of the concerts are free and take place at venues such as David Lam Park, Granville Island, and the Vancouver Art Gallery. The festival is the perfect way to welcome summer in Vancouver, as you listen to some of the world’s best jazz, funk, Latin, and world music performers.

Lots of great festival fashion on and off the stage at David Lam Park for #vanjazzfest!