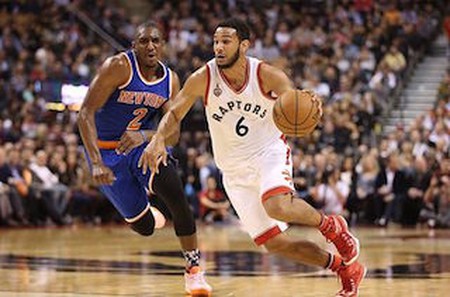 There are a number of young stars destined for greatness who are proud of their Canadian roots. Follow our guide for the top 10 athletes on the rise.

The 24-year-old point guard (#6) for the Toronto Raptors, “Cory Joe” grew up in nearby Brampton in a family full of athletes. His parents Connie and David Joseph played at Mount Royal College in Calgary, and older brother Devoe last played for Budućnost Podgorica of Montenegro in the 2016 season. He attended Pickering High School in Ajax, later going to the University of Texas. Cory was initially drafted to the SA Spurs in 2011, breaking ground as it was only the second time in NBA history that two Canadians (alongside his friend Tristan Thompson) were selected in the first round of the same draft of that year. Joseph later won his first championship with the Spurs in 2014, eventually signing for the Raptors in 2015 with a reportedly $30-million dollar contract.

Currently playing for the Cleveland Cavs, Tristan Thompson was born in Toronto and grew up in Brampton with fellow 905’er Cory Joseph, although they have currently put their friendship on hold for the time being. Thompson began at St. Marguerite d’Youville Secondary School in nearby Brampton, eventually ending up at The University of Texas alongside Cory Joseph, and was drafted to the Cavs in 2011, where he still plays as a center/power forward averaging just under 10 points per game. He is pictured below (right) with Team Canada mate Cory Joseph.

Born and raised in Montreal and of Haitian descent, Jennifer Abel was one of the youngest to tread the diving board at the Beijing 2008 Olympics. So far she has represented Canada twice, even though she plans on studying Communications at École ProMédia in Quebec after 2016 (and dreams of one day becoming a TV host).

When your coach says you don't have to do your last run #winning 🤗😋😏📸 :@lolojones

How could we compile a list of notable young athletes without the first round NHL draft pick of the 2016 season. Connor McDavid grew up in Richmond Hill, and attended Premier Elite Athletes’ Collegiate, a private school for elite athletes near Downsview Park. Granted “Exceptional Player” by Hockey Canada, McDavid was able to enter the OHL a year early, playing for the Erie Otters. As a child destined for greatness, he was drafted by the Edmonton Oilers in 2015.

Kaya Turski, also known as the queen of ski slopestyle, was born in Montreal, and moved to Whistler to train at the age of 17. Originally an aggressive inline skater, Turski was new to skiing when she first moved to the West Coast. However, she quickly improved and is consistently pushing the boundaries. In 2011, she was even the first woman to land a 1080 slopestyle switch. Not to mention, she is also an eight-time Winter X games champion in the sport.

Christine (know as ‘Peng Peng’, her Chinese name, in the gymnastics world) is a Canadian-born artistic gymnast. Born in 1993 in Scarborough, she attended Northview Heights Secondary School in North York, whilst training at Sport Seneca/Oakville Gymnastics Clubs. She currently attends UCLA. Following a knee injury in 2012 causing her to miss the London Olympics, Christine took off two competitive seasons to focus on her studies in Sociology.

Born in Sainte-Agathe-des-Monts in Quebec, and a third overall pick in the 2013 NHL entry draft, Jonathan Drouin was first signed to the Tampa Bay Lightning with hopes of playing a key role at the club. After being sent to the minor team (while refusing to show up to the minor games and requesting a trade) he is now one of the most sought-after players on the team, and perhaps even the NHL, posting an impressive 11 points in 13 games in the current playoffs.

Evan Mceachran, born in 1997, is the second youngest on his ski roaster, having just graduated from Oakville Trafalgar High School in June 2015. Evan’s claim to fame started at one of the most prestigious slopestyle events — the AFP World Championships in Whistler, 2014. The year proved eventful for Evan: he also won 4th place at the Dumont Cup, 2nd place at the Aspen Open, and 1st place at the North Face Open (also in Whistler). He has already competed in one X Games, coming in 14th in the competition.

Born in Huntsville, Dara was the first freestyle skier to win a gold medal in slopestyle at the 2014 Winter Olympics in Sochi. She dedicated her medal to fellow female skier Sarah Burke who passed away in a training accident two years prior. She attended Huntsville High School, later graduating from Tawingo College.

Memories for a lifetime. So many things changed 2 years ago today. It all seems like a blur now but I was living some of the days of my life. #sochi2014 Thankful for this chapter and even more thankful for all the people it's brought into my life! 🙌🏻