A growing economy combined with the return of talented entrepreneurs and chefs from abroad is now causing an exciting culinary renaissance in St John’s. Newfoundland cuisine is rooted in making the best of what can be caught, grown, or raised locally. Inventive restaurateurs are using the province’s staple wild game, vegetables, and fish to create a new style of cuisine that is comforting and surprising. 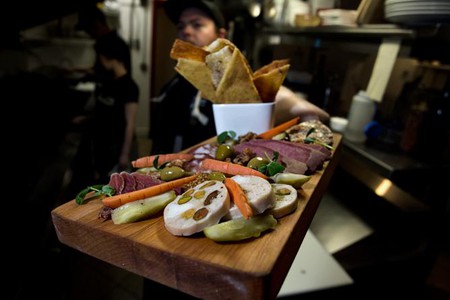 Chinched Bistro serves up a menu of contemporary bistro cuisine in a relaxed setting. The restaurant is known for its cool cocktails, tasty tapas, and house-made dishes. The menu emphasizes locally-sourced and seasonal ingredients with every dish made using traditional cooking methods. The interior features a separate bar on one floor with its own menu, in addition to a dining room on the upper floor. The artisan cheese platters are perfect for sharing with friends or opt for an entrée like the ‘Potato Wrapped Cod’, made with pulled salt beef and new potato hash along with braised cabbage and mustard pickle vinaigrette. 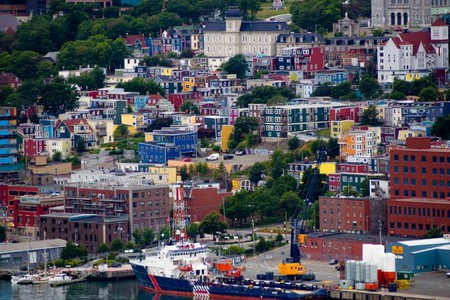 Aqua Kitchen & Bar is known for its diverse menu and casually hip setting. Expect an eclectic mix of Canadian dishes, such as the grilled Alberta beef rib eye, alongside internationally-inspired fare like the braised lamb shoulder and grilled chop tagine. With trendy furnishings and quirky artwork, the restaurant is an ideal place for a sophisticated dinner or just after-work drinks. The restaurant’s excellent selection of wines, beers, and cocktails pair perfectly with shareable snacks like the ‘Drunken Mussels,’ which are steamed with kimchi, miso, sake, and chilies.

Bacalao Restaurant describes its menu as ‘nouvelle Newfoundland cuisine,’ promising familiar flavours presented in innovative ways. Aside from its namesake ‘bacalao’, which is a type of salt cod, the restaurant’s locally-driven menu features both catch and game specials. Their signature dish is a twist on the province’s traditional Jiggs dinner, an appetizer of salt beef, turnip, potato, and carrot rolled in a cabbage leaf. Set in a heritage home, seating is offered in four cozy rooms which are decorated with local artwork and have several fireplaces. 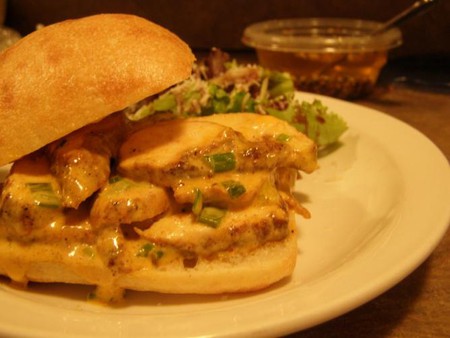 Named for the capital of Bulgaria, Bistro Sofia offers a low-key dining experience with a hint of European flare. The restaurant’s interior is invitingly elegant with large windows, dark brown leather chairs, and a sleek fireplace. Service is fast yet the food is high-quality and never feels rushed. The sandwiches are a local favourite, ensuring the restaurant is equally busy at lunch as at dinner. Go for the smoked and brined hot turkey sandwich, the prosciutto panini, or one of the rotating daily specials.

Get Stuffed’s unpretentious setting perfectly complements its menu of gourmet comfort food. Diners can choose from regular or ‘get stuffed’ portion sizes, ideal either for sharing or for those with big appetites. There’s also a playful option to add a hot dog to any entrée for an extra $1.00. The chef’s talent for adding an upscale twist to home-style cuisine is evident in dishes like the meatloaf, which is made with seasoned ground beef and pork charred slightly on the grill, and served with a mushroom demi-cream. 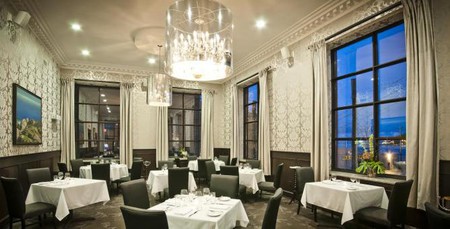 Voted the best restaurant in the country by Vacay.ca, Raymonds has received widespread acclaim for its reinvention of traditional dishes. The menu is concise and carefully-chosen, focusing on local meats, fish and produce. Typical entrées include the Newfoundland cod, butternut squash with smoked ricotta ravioli, and grass-fed Prince Edward Island beef tenderloin. The restaurant is housed in a beautiful early 20th century building overlooking St. John’s harbour. The atmosphere is decidedly upscale with luxurious drapery and large windows that capitalize on the spectacular view. There’s also an extensive selection of wines thanks to the restaurant’s manager, who is also a certified sommelier.

Restaurant, Seafood, Canadian, Vegetarian, Vegan, $$$
Facebook
Email
Twitter
Pinterest
Copy link
Share
Named one of the ‘Top 30 New Restaurants in Canada,’ by Enroute, Mallard Cottage is chief among the many new restaurants in the city that are re-imagining local Newfoundland cuisine. Located in Quidi Vidi Village, a charming fishing hamlet in St. John’s, the restaurant is set in one of the oldest wooden buildings in North America. The former family cottage has been renovated to reflect the restaurant’s innovative menu, which emphasizes traditional ingredients like wild game, seafood, local produce, and Canadian wine. The interior features wooden spoke chairs, an open kitchen, antique oil lamps, and exposed beams lined with jars of preserves. Follow the restaurant on Instagram to find out what they’re cooking up each day.

The Reluctant Chef offers an original dining experience by constantly changing its multi-course set menu. The restaurant focuses on local cuisine with a typical set menu including meat and fish dishes, pastas, cheeses, salads, and dessert. Expect dishes like beef tenderloin carpaccio drizzled with a parsley-shallot citronette, topped with dehydrated goat cheese and lamb ragout, served over spirulina spaghetti. Although the courses are usually left to the chef’s whim, the staff is careful to ask about allergies.

Opened in 2005, the Sprout is one of the few vegetarian venues available in the province. The restaurant’s smart menu is also perfect for vegans, gluten-free diets, and even omnivores. The menu features a mix of soups, salads, sandwiches, and veggie burgers along with a few international dishes like Pad Thai and falafel. The ‘Bravocado’ sandwich is a popular choice; made with avocado, brie or cheddar, and choice of basil mayonnaise or spicy soynaise. Also check out the ‘Poutine with a Twist’, a vegan, gluten-free spin on the Canadian classic made with miso gravy, veggies, and toasted seeds. The setting is laid-back and friendly with local artwork decorating the walls and cheerful music providing the soundtrack. 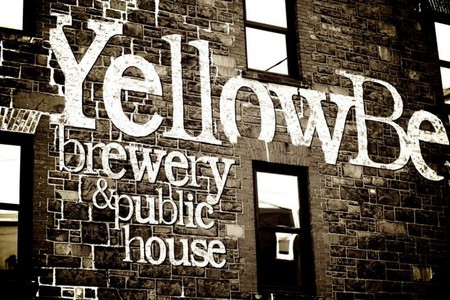 YellowBelly Brewery & Public House is a brewery, pub, and restaurant housed in one of the oldest buildings in the city. Originally built in the early 18th century, this historic building has been beautifully restored with an open-concept kitchen, reclaimed Newfoundland pine floors, and exposed brickwork. The menu offers a selection of steaks, seafood, chicken dishes, burgers, and wood-fired pizzas. Wash them down with a pint of one of the YellowBelly’s craft beers like the Wexford Wheat or the Fighting Irish Red. The restaurant also hosts a regular line-up of entertainment, from trivia nights to cabaret performances.