The Story of Riyadh, Told Through Its Architecture 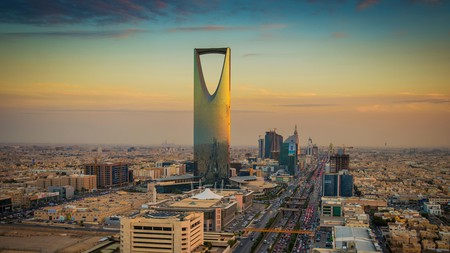 In 1920, Saudi Arabia’s capital Riyadh covered approximately 1sqkm. Now, just a hundred years later, the city measures over 2,000sqkm and is where you’ll find some of the country’s finest buildings and mosques.

Riyadh is a city with an intriguing history that stretches back through the ages. Once a tiny oasis village called Hajr, used for little more than feeding the ancient traders that crossed the great deserts of Arabia, it is now one of the richest cities in the world. The journey of Saudi Arabia‘s capital is one filled with tales of valiance, the rise and fall of empires, striking black gold and ridiculous wealth. This is the story of how a tiny desert oasis became one of the world’s largest capitals, told through its fascinating architecture.

On the western edge of Riyadh, near Highway 80, sits a tiny ancient town with a huge part to play in Saudi Arabia’s story. Historic Diriyah may look unimportant next to the grandeur of neighbouring Riyadh, but this mud town was not only the first Saudi state, but the very beginning of the Saudi dynasty.

Diriyah’s mud palaces, mosques, houses and souks once housed the Emirate of Diriyah and now display the finest examples of Najd mud architecture in the city. These distinct, fortress-like buildings feature tiny square windows that reduce the entry of sunlight and heat, to ensure the interior remains cool.

Destroyed by the Ottomans in 1818, the historic town was left to rot for more than a century. Now fully refurbished, today it is a UNESCO World Heritage site with its own commercial area, cafés, restaurants, museums and a visitor centre.

Built in the traditional Najd mud style, this mosque is where the controversial 18th-century scholar Muhammadan Ibn Abdul Wahhab once preached. The pretty, white and sand-coloured monument is a modern-day incarnation of the original, modest mosque that once stood in the same location. This mosque has a fort-like structure with rising turrets and a flat roof. Its namesake famously joined forces with Muhammad Ibn Saud, emir of Ad-Diriyyah in the mid 18th century, helping to legitimise the latter’s desire to conquer neighbouring states and create a single Islamic state.

The mosque sits on the opposite bank to historic Diriyah and is a powerful reminder of the alliance that facilitated the Saudi dynasty. Remember to dress modestly, ensuring the arms and the legs below the knees are covered, and garments are not transparent.

Built around 1865, the Masmak Fortress represents the bravery of the father of modern Saudi Arabia, Ibn Saud (King Abdul Aziz). The fortress was also the location at which, on 14 January 1902, King Abdul Aziz successfully conquered Riyadh and killed the Chief of Riyadh, Ibn Ajlan, in what has come to be known as the Battle of Riyadh.

This mud fortress sits in the historic southeastern section of Riyadh, known as Ad Dirah, and has four round watchtowers and thick mud and clay walls. Today, it is a museum celebrating that historic moment when the young Ibn Saud captured Riyadh to re-establish the Saudi dynasty. Visitors will find a small mosque room, cannon and well inside the castle-like structure, where displays of historic guns, traditional Saudi clothing and domestic tools are spread across two floors.

Thumaira Gate, in the historic Ad Dirah section of Riyadh, is all that remains of the city wall King Abdul Aziz built immediately upon taking Riyadh. It symbolises the period in which Riyadh first became the capital city of the newly declared Kingdom of Saudi Arabia.

This old mud gate is identified as one of nine historic gates on the 1922 map of Riyadh, in Harry St John Philby’s book The Heart of Arabia (1922). The sand-coloured gate features a small turret that can be climbed by visitors to take in the modest vistas that overlook the historic souk area.

Built at the very start of Saudi Arabia’s oil boom in 1936, Murabba Palace represents the moment that the kingdom struck black gold.

King Abdul Aziz built Murabba Palace in an area outside Riyadh and left the Masmak Fortress, making this his permanent residency. The palace was where the country’s very first automobile – a Rolls Royce, a gift to the king from British Prime Minister Winston Churchill – was received, and the country’s first electric lift was installed for the ageing king.

Murabba Palace is now a museum featuring historic artefacts and archives, containing many of the king’s letters and photographs. A highlight for many visitors is seeing the car that was sent to the king.

Riyadh’s first skyscraper, designed by celebrated British architect Sir Norman Foster’s firm, Foster and Partners, rose up like a glass mirage from the surrounding desert in 2000 to announce to the world the wealth and ambition of Saudi Arabia’s capital city.

Standing at a phenomenal 267m, the building features a stunning golden glass sphere near the pinnacle, which is home to the fine dining Globe restaurant and is situated above a panoramic observation deck, also open to visitors.

The shopping mall at the foot of the structure features a spectacular coloured-glass wall by artist Brian Clarke, which evokes the surrounding desert and Islamic culture in its design. The Al Faisaliyah is near the city centre, off Al Olayah street.

If the Faisaliyah was Riyadh’s announcement of affluence and indulgence, then the sleek, ultra-stylish Kingdom Centre, completed only two years later in the Al Olayah district, was confirmation that Riyad had become a global city of wealth and prosperity. Home to luxury hotels, offices and some of the world’s leading fashion and retail brands, it is the icon of modern Riyadh.

One of the world’s highest restaurants is situated in the necklace of the building’s distinctive U-shaped inverted parabolic arch. Along the top of the arch is the glass Sky Bridge, a 65m tube that stretches over and across the top of the building, offering sumptuous views of the Saudi capital from a dizzying height of over 300m.

Riyadh’s only world-class museum, the National Museum features stunning displays and fascinating artefacts from all over the kingdom, including a life-size reproduction of one of the Nabatean tombs of Madain Saleh. The development of a museum like this hints at where the kingdom is headed: one of the goals of the country’s Vision 2030 plans is to put a museum in every major town and city across the kingdom, as Saudi Arabia aims to make itself more attractive to tourists.

Eight galleries have been set across two floors in a well-thought-out route that takes visitors from prehistory right up to the modern era. Using state-of-the-art technology and displays, including 180-degree cinema-style screens, the exhibitions tell the story of how the Kingdom came into being.