Shaping the City: The Battle To Beautify Jeddah With Public Art 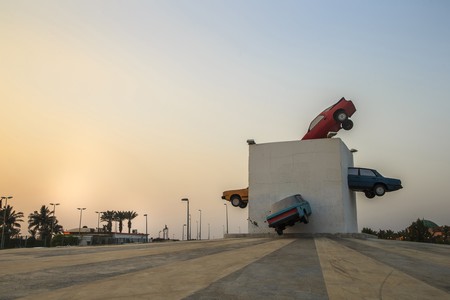 One man’s vision to bring the work of world-renowned sculptors to a city in a state of flux has helped shift cultural perspectives and transform the landscape in Jeddah, Saudi Arabia.

In Jeddah, an eye watches over the corniche. Stern, imposing, with a gaze both distant and direct, it is carved into a five-metre-tall block of bronze.

The Eye by César Baldaccini faces Joan Miró’s Oiseau, a hefty, three-legged bird that protects its offspring as it stares back in defiance. Along the waterfront, 19 more sculptures – a globe, a flame, an oval, another bird, another flame – shine under the searing desert sun. This is the Jeddah Sculpture Museum, which houses work by other sculptural heavyweights including Henry Moore and Alexander Calder. 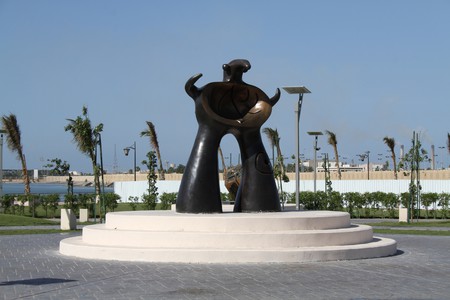 Project for a Monument by Joan Miro | Courtesy of Art Jameel

And if you drive away from the corniche in any direction, you’ll find even more sculptures – on roundabouts, outside universities, across highways and side roads – which seemingly have nothing in common except for the fact that together they transform a relatively quiet Saudi Arabian city into a surrealist landscape, an open-air museum.

“Some of [the art] is kitschy, some of it is simple, some of it is very complex,” says Hani Farsi, whose father, the late Mohammed Said Farsi, was the mastermind behind the sculptures. “But that is not the point.” The point, he explains, was to place art at the heart of a rapidly expanding Jeddah.

While studying civic planning in Alexandria, Farsi Sr had been astonished by the bustling cafés, museums and galleries, admiring in particular the city’s corniche, the first seaside development of its kind in the Arab world. When he took over as town-planning officer in the Saudi port city, in 1963, there were no museums, galleries or theatres; inspired by what he had seen in Egypt, he launched a project called the Beautification of Jeddah. “He had very little budget to work with,” says Farsi, “but it was very important to him to follow what he had learned as an architect, which was to make sure that [the] city had small parks and public art.” 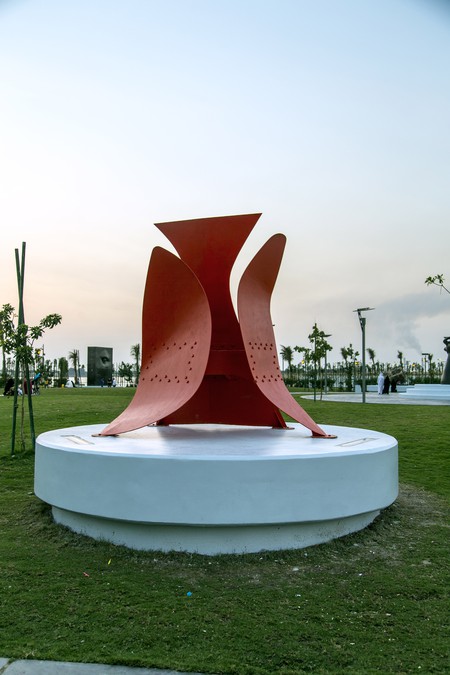 His first commission, The Bird’s Wing, a two-metre abstracted wing by Saudi artist Abdulhalim Radwi, was erected by the sea in 1968. With strict Islamic law in place prohibiting the depiction of the human form, abstract art provided safe and fertile ground. Two more sculptures by the same artist followed soon after, and several more by other artists came after that. During Farsi’s tenure as mayor, between 1972 and 1986, he commissioned all of the city’s public artworks. With the start of the oil boom in the late 1970s, Farsi expanded the city of Jeddah and, with it, his art project.

A well-connected man, he began collaborating with Spanish architect Julio Lafuente to commission ambitious pieces from international sculptors. Though Lafuente spoke no English or Arabic and Farsi spoke no Spanish, the two had a 15- year friendship, communicating using their own form of sign language. They purchased artworks such as Miró’s Project for a Monument, designed their own sculptures and commissioned major artists such as Arnaldo Pomodoro and Aref el Rayess.

Impressively, the architects did not draw from the meagre city-planning budget to fulfil Farsi Sr’s artistic vision. “He either paid for the sculptures himself or he got businesses to be interested,” says Farsi. “They couldn’t believe that this city in Saudi Arabia had three Henry Moores, so they would then help him pay for them.” 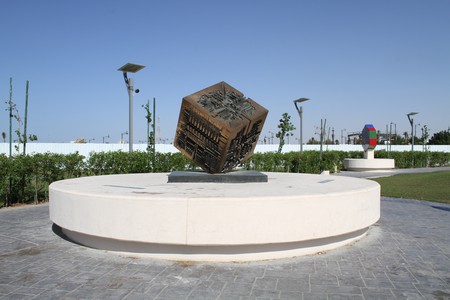 Soon, hundreds of statues lined the streets. “At that time, the streets didn’t necessarily have names; they were all new as the city was growing. So these monuments became landmarks, a way of you finding your bearings,” says Farsi.

Despite the sculptures’ practical use, the project faced fierce opposition. “A lot of people would say, ‘Why don’t you build more mosques instead of doing this public art?’” says Farsi. Indeed, many were frustrated by how the sculptures appeared faster than housing, electricity or schools. Some of the opposition was aimed at specific sculptures. When Farsi began working with César, the pair came up with the idea of a 70-tonne marble thumb to illustrate a passage in the Quran that discusses Allah’s ability to produce unique fingerprints for every human being. “He thought even the establishment couldn’t be that upset,” says Farsi. “Well, they were furious. Because [he had] built something that only God is supposed to.” In the end, they were forced to remove The Thumb.

With the mayor’s departure in 1986, the driving force behind the Beautification of Jeddah was lost. A rise in extremism throughout this and subsequent decades also led Saudi Arabia to become more insular, and this international project was abandoned; the statues were left to wear away, attacked by harsh winds and salt from the Red Sea. 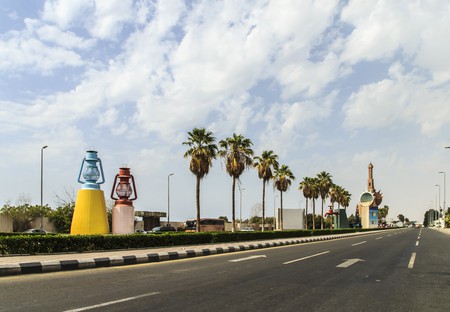 “Things stopped quite dramatically,” says Chris Dercon, the president of the Réunion des Musées Nationaux-Grand Palais in Paris and former director of London’s Tate Modern, who contributed to Sculptures of Jeddah, a book about the city’s revitalised sculpture park. “The state was not interested in nurturing culture.”

It wasn’t until 2011 that restoration work on the sculptures began. Overseen by the cultural institution Art Jameel and the Municipality of Jeddah, at its heart was the creation of the Jeddah Sculpture Museum. In 2014, Art Jameel launched a second phase of restoration, which included work on two major sculptures by César and Lafuente, as well as new commissions by Riyadh-based artist Maha Malluh, the first Saudi woman to contribute to the project. Its rebirth has also coincided with a broader artistic movement in the city.

“Jeddah is really starting to [emerge] as a cultural hub,” says Dercon. Among the new events and institutions, he highlights the annual international art festival 21,39, the inauguration of the cinema chain VOX in August 2019 – a first for a city where cinemas were banned until 2018 – and the scheduled opening of Hayy: Creative Hub in 2020 as signs of changing times. 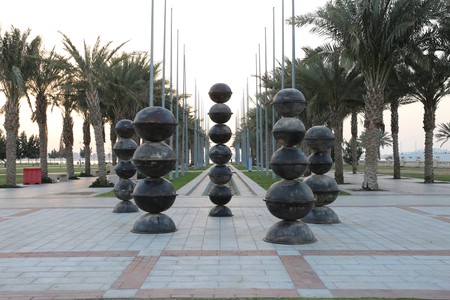 Food for Thought by Maha Malluh | Courtesy of Art Jameel

“There is an energy that’s being felt,” says Maya el Khalil, an independent curator who ran Jeddah’s Athr Gallery for almost a decade. “I think we still have a long way to go to make art and culture part of the framework of Saudi society, from revamping the art curriculum at schools to setting up more art academies,” she says. “But there’s a lot to look forward to, too.”

That art isn’t a part of daily life in a city so densely populated with the work of some of the world’s greatest sculptors might come as a surprise. According to El Khalil, there’s a good reason for it.

“The sculpture park and the commissioning of sculptures from important artists was all the vision of one man,” she says. “A generation grew up side by side with these sculptures without really knowing that they were a Henry Moore, or a Calder, or a Joan Miró.” 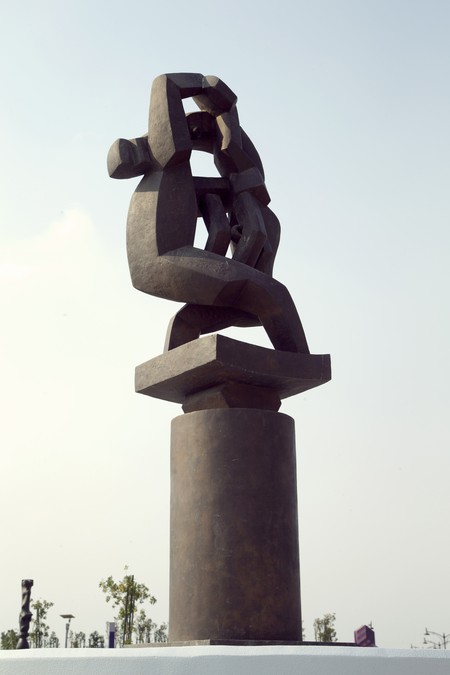 Perhaps now, given the way Jeddah’s cultural scene is blossoming, they will; perhaps the city is finally catching up to one man’s artistic ambition.