When Monaliza Smiled: A New Hope For Jordan’s Film Industry

Arab Observer blogger Fadi Zaghmout shares his thoughts on the Jordanian film When Monaliza Smiled, a romantic comedy about Monaliza, a Jordanian, and an Egyptian named Hamdi. This film, directed by Fadi Haddad, marked an upsurge in the international reputation of Jordan’s film scene, which is now renowned for being one of the most exciting in the Middle East.

Many familiar faces attended the private screening of the new Jordanian romantic comedy When Monaliza Smiled at the Royal Film Commission in the summer of 2012 – faces which included many well-known bloggers and young talents involved in the local film scene.

The film opened at local theatres in September 2012 and is another major milestone highlighting the emergence of Jordan‘s dream to create a successful and prolific film industry. It’s an industry which is currently still in its infancy and has no pre-set formulas, no expectations and no previous success stories to copy. All that it has is some very well trained and talented young Jordanians who are courageous enough to take on the challenge of experimentation and carving the stone for generations to come. That is what makes this film unique in so many ways.

The film itself is a love story that builds comical situations on highlighting stereotypes in this country with a romantic lens that gives a ‘feel good’ vibe to the whole experience. It soothes the hardship of reality with the tenderness of love and a glimpse of light that brings hope to your heart in the knowledge that no matter how social restrictions grow, humanity will always find a place for love and happiness. 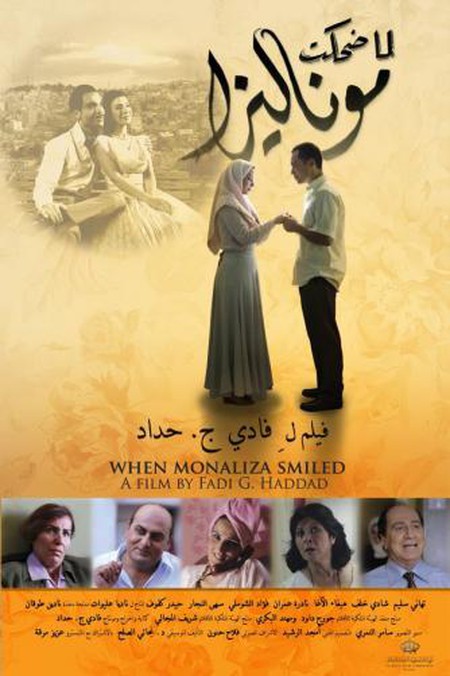 Ironically the cheerful part of the film came from the protagonist, an Egyptian worker. He added an Egyptian edge that reminded us of how much we love Misr – a bridge that was smartly (although perhaps intentionally) built between the infant Jordanian film industry and that well established historical Egyptian film legacy.

The brief black and white scenes reminded us of the good old days. It made me want to see a full Jordanian film that reflects that era of time. What would a romantic story that reflects the 1960s or 1970s in Jordan looks like? It seems like Fadi Haddad, the director, is good at creating nostalgia and bringing out the beauty of that era. It would be a great project if he ever decided to pursue it. The art in those scenes is admirable.

When Monaliza Smiled didn’t just build a bridge between Jordanian and Egyptian films, but also between the old generation of talented local actors and the new emerging ones. Watch out of a brilliant role for Nadera Omran, one of the funniest characters in the film which will make you cry from laughter.

I can’t help but mention that both the producer and the executive producer of this film are women. Hats off to Nadia Eliwat and Nadine Toukan for taking on this challenge and contributing to this milestone that will help establish Jordan as a film making hub. Jordanian film makers have a new hope for the future.

Originally Published on The Arab Observer