18 Instagrams That Will Make You Fall in Love With Jordan 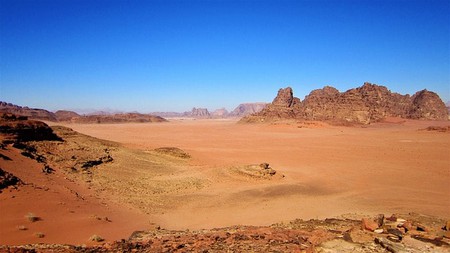 With its unimaginable diversity of natural landscapes and wealth of historical and archeological places of note, it’s really no surprise that Jordan has a reputation for being a photographer’s paradise. Whether you’re a keen shutterbug, or just on the lookout for your next adventurous travel destination, here are 18 Instagrams that will make you fall in love with Jordan.

The desert castles of Jordan are a must-visit for those with an interest in the history and archeology of the region. As a well-preserved testimony to the Umayyad period, Qasr Amra dates all the way back to the 8th Century.

For the more active traveler, Jordan is home to a host of hiking trails located along its most stunning landscapes. Check out ‘The Jordan Trail’, a continuous route crossing the entirety of Jordan from Um Qais in the North down to Aqaba at the Red Sea. The route stretches 650 kilometres and will take you around 36 days, but it is also possible to hike just sections of the route.

The sea port town of Aqaba in the southernmost part of the country hosts a variety of breathtaking diving spots.

Brace yourself to see a diverse selection of sea life whilst on your dive.

One of the most popular destinations for photographers and visitors alike is Wadi Rum desert. Stay for a night at one of the many camps across the desert, owned and managed by the native Bedouin tribe of the area.

Also known as the ‘Valley of the Moon’, the stunning desert landscape attracts many filmmakers looking to set take advantage of the jaw-dropping backdrop. Some well known features filmed here include ‘The Martian’, ‘Lawrence of Arabia’ and ‘Prometheus’.

Another unsurprising favourite for photographers and historians alike is the ancient rose city of Petra. Currently standing as one of the new seven wonders of the world, Petra is estimated to have been established as early as 312 BC, and was once home to the ancient Nabatean people.

One of the more curious natural wonders of Jordan is the Dead Sea. Due to the high salinity of the waters, no fish are able to survive here. Tourists and locals alike come to experience floating in the sea and to reap the benefits of the minerals contained in the natural mud found on the shores.

The salty shores of the Dead Sea.

Dana Biosphere Reserve is Jordan’s largest nature reserve, located in the south of Jordan. It is famous for its biodiversity of plants and animals, and is the only nature reserve in Jordan that crosses four bio-geographical zones: Mediterranean, Irano-Turanian, Saharo-Arabian, and Sudanian.

Sunsets with views like these 😍😍😍 The road to Little Petra. #ShareYourJordan #Dana Photo Credit @osaw

The Jordanians themselves are reason enough for you to fall in love with the Kingdom. Incredibly friendly and hospitable, Jordan is largely geographically divided into large tribes who hold influence over a particular stretch of land. Below are the Bani Sakher tribe celebrating Independence Day, a national holiday in Jordan.

A post shared by samarqand photography (@samarqandphotography) on May 28, 2017 at 5:54pm PDT

The capital city Amman also has a great deal to offer, with one of the highlights being the Roman Amphitheatre located downtown. Many concerts and plays are still enjoyed within its walls to this day.

A post shared by Ibrahim Bashabsheh Photography (@ibrahim.bashabsheh) on Jun 15, 2017 at 1:12pm PDT

The Abu Darwish Mosque in the district of Ashrafiyeh in Amman is one of the most beautiful Mosques in the city.

The real heart of the city lies in Downtown Amman, where you will find a lively and bustling criss-cross of markets and delicious food joints.

Another real highlight of Amman has to be the sunsets. Made up of several mountains and hills, there are many wonderful spots across the city to watch the sun go down. One of the best places to do so is in Ashrafiyeh.

A post shared by samarqand photography (@samarqandphotography) on Aug 29, 2017 at 4:00pm PDT

For art lovers, there are many galleries and museums in the capital for you to wistfully wander around. But don’t forget to watch out for the fantastic street art located across the city whilst you are on your travels.

The Amman Citadel is another example of the historical riches of Amman. Sitting on the highest hill of Amman, its most striking sights are the Temple of Hercules and the Umayyad Palace.