Iraq-born Britain-based architect Zaha Hadid was the embodiment of both architectural genius and the lofty grandeur that often comes with it. We take a look at Zaha Hadid’s architectural career, highlighting ten of her most celebrated — and controversial — works. 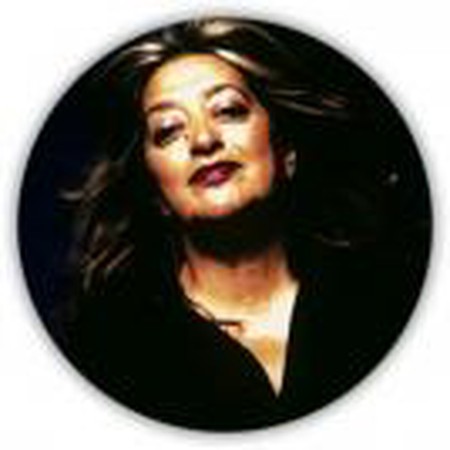 Once the “architect who couldn’t get anything built,” in 2004, Zaha Hadid won the Pritzker Prize, architecture’s most coveted laurel, cementing her status as one of the most influential architects in the world. Zaha Hadid was now among the best known and most sought after architects with projects in Saudi Arabia, China and Japan as well as continental Europe. As an Iraqi-British woman, Hadid broke down the stereotypes of architecture as the retreat of middle-aged ego-maniacal men. However she generated controversy for her single-minded dedication to her work — and, famously, for her imposing public image.

Educated at the Architectural Association in London in the 1970s and tutored by the likes of Rem Koolhaas, Zaha Hadid seemed to land her first big break when she won the design competition for the Cardiff Bay Opera House in 1994, a major cultural project. Yet the design was never built as the development devolved into acrimonious exchanges; Cardiff-based politicians and lobbyists labeled the project an ‘elitist’ imposition from London and funding was curtailed. 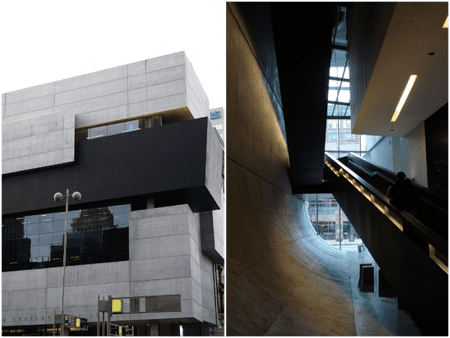 The American Midwest is hardly the most obvious area to be associated with avant-garde future-facing architectural design, yet the Rosenthal Center For Contemporary Art in Cincinnati, Ohio, built in 2003, became the first of Zaha Hadid’s projects in America, and the one which garnered her a Royal Institute Of British Architects (RIBA) award. Completed in 2003, Hadid’s first major building was heralded by the New York Times’ Herbert Muschamp as “the most important American building to be completed since the end of the cold war.” 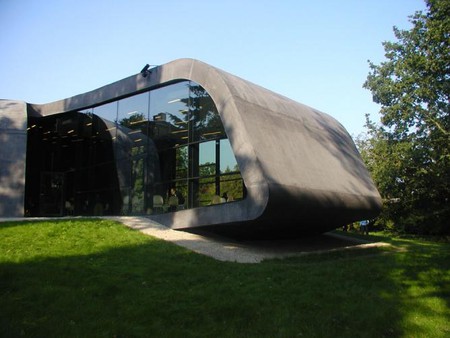 Zaha Hadid’s next project to be fully realized was another art museum, this time located just outside of Copenhagen. Built in 2005 on a far smaller scale than the Rosenthal Center and the MAXXI Museum, the Ordrupgaard Museum Extension proved Zaha Hadid’s ability to build within a framework and adapt to context while maintaining her signature sleek concrete lines. Understated and gentle, the Ordrupsgaard Extension undulates along the garden landscape. Its floor-to-ceiling windows allow in the maximum amount of light to create an airy spaciousness that sits in calm equilibrium with its weighty concrete shell. 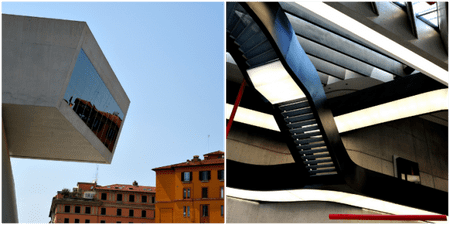 The first national museum of contemporary art in Italy, Zaha Hadid’s MAXXI building, built in 2010, creates a maze of interconnected, sinuous, free-flowing lines that blur the division between interior and exterior. This spatial permeability is an echo of the multi-functional purpose of the museum; with a growing collection of contemporary art that spans multidisciplinary practices, the space is flexible and fluid, allowing for radical transformation. While generating some controversy, Zaha Hadid was awarded Britain’s top architecture award, the Stirling Prize, for the MAXXI National Museum design in 2010. 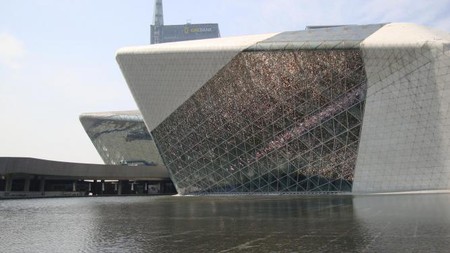 Spectacular and stunning, the Guangzhou Opera House, built in 2010, is an ambitious and grand building, fitting an increasingly confident and secure China. Indeed, the Guangzhou Opera House is an emblematic project over a decade after Hadid’s Cardiff Opera House disappointment. Situated along the Pearl River in Guangzhou, the opera house seems to shimmer and undulate, mimicking the movement of the river. Manipulating concepts of erosion, geology and the relationship between building and land, Zaha Hadid’s Guangzhou Opera House promises to be the cultural center of the site. However, the spectacularly finished building, which opened to great fanfare, has not been free of construction problems due perhaps to the climate or to the rapid time frame given to erect the building. 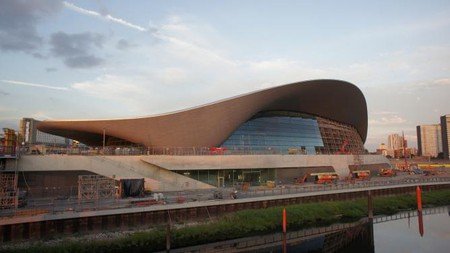 Built in 2011, Zaha Hadid’s London Aquatics Center marked her triumphant entry into the nation’s capital where, in spite of her global recognition, she has long been tepidly received. Located in Stratford, the London Aquatics Center was one of the main venues during the 2012 London Olympics. Featuring an undulating roof that mimics the flow of water, the space was hailed as “majestic” and a fitting homecoming for Hadid who, in spite of basing her architectural studio in London, had only one other significant project in the city, the Evelyn Grace Academy in Brixton, for which she won a Stirling Prize. 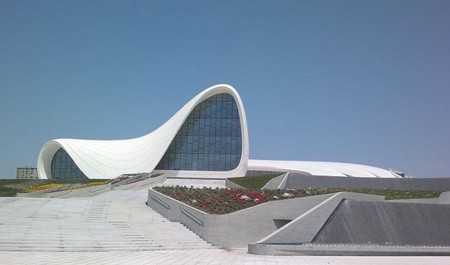 Made up of concentric curves that convey ocean ripples or perhaps layers of windswept desert sand, the Heydar Aliyev Cultural Center, built in 2012, undulates like a living creature in the Azerbaijani landscape and our attention is drawn to its structural curvature by the visible surface lines that trace its curves. As enticing as the design is, however, the Heydar Aliyev Cultural Center is among Hadid’s most controversial. The center drew vitriol from both architectural critics and non-architects, including eminent Soviet historian Orlando Figes and philosopher Alain de Botton, but not for its design! Instead Hadid was criticized for associating her architectural signature with the government in Baku, which has been widely disparaged for its oppressive abuse of human rights.

Completed in September 2013, Hadid’s Serpentine Sackler Gallery, built in 2013, is a small project. Like the Ordrupsgaard Extension in Denmark and the MAXXI in Rome, Zaha Hadid set out to create a gallery extension that complemented the original structure, in this case, a nineteenth century gunpowder store. The contrast to Hadid’s computer-generated twisting, soaring structures could hardly be greater. As with the Ordupsgaard Extension, Hadid’s design brings in maximum light and space which offsets the predetermined horizontal structure. While compared less than flatteringly by an English critic to “a wedding marquee battling with a stiff breeze,” Hadid’s design is defiantly stamped with her signature style — its free-flowing fluidity and organic curvature. Her design both complements and contrasts with the original building as it breaks radically from the classical symmetry that governs its aesthetic. 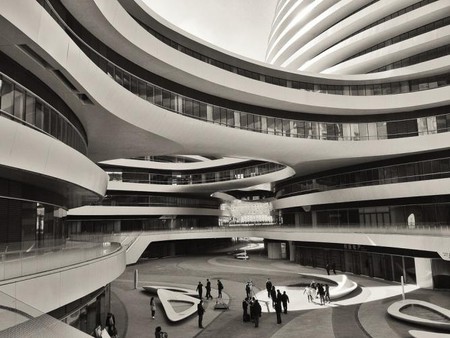 Curve-linear and free flowing, with a courtyard center inspired by Chinese design, Zaha Hadid’s Wangjing SOHO, an office, retail and entertainment space situated in the Wangjing suburb of Beijing, sits firmly within the Hadid style. Yet the SOHO project is also controversial, beginning with a plagiarism issue. If an entire UNESCO-listed Austrian town can be uprooted from its European context and replanted in China, then, it turns out, so too can the work of one of the world’s preeminent architects. A pirated copy of Hadid’s SOHO design with gently parabolic structures is being replicated at lightning speed in the southwest Chinese city of Chongqing. The one major difference in that the Chongqing version has two towers, not three. More recently, Hadid’s Beijing project Galaxy SOHO erupted in controversy after being awarded a RIBA award. A Chinese heritage group criticized the project for its disruption of the surrounding area and the destruction of Beijing’s centuries-old hutongs and alleyways. In spite of its rocky reception in China, the SOHO complex promises to showcase Zaha Hadid’s inimitable style in the Chinese capital.

Zaha Hadid “will finally get to land one of her spaceships in New York,” wrote New York Magazine on receiving word that the architect will be making her New York debut in 2016. Whereas Hadid had projects going up in global cities around the world, including Beijing, Seoul and Moscow, New York has eluded her until the 520 West 28th Street project. In 2004, she wanted to design the High Line, but, in the final round of the competition, her studio lost out to Diller Scofidio + Renfro for the coveted project. Nearly a decade later, designed an 11-story condominium right next to the High Line. Hadid showed off her ability to work within narrow spatial and planning constraints, whilst creating something within her signature aesthetic — beautiful, sleek and firmly future-focused.