The city of Basra has a long history with a rich culture and an identity distinct from its more northern cousin Baghdad. While Baghdad developed the busy urban character typical of capital cities, Basra retained more of a romantic quality and is often called the most beautiful part of Iraq. 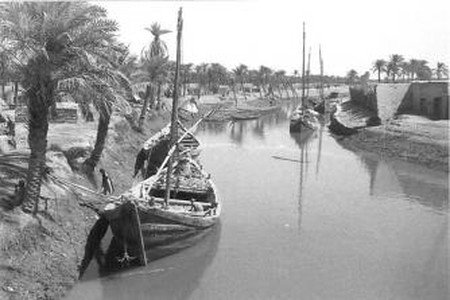 The great rivers Euphrates and Tigris flow through Iraq before converging into the Shatt al-Arab, shortly before reaching Basra. The huge river connects the city with the Gulf and gives it a coastal feel, despite being 25 miles from the sea. This fertile area is also surrounded by the largest date palm forest in the world, fed by the cooling waters of the Shatt al-Arab and the fierce heat of the desert. The Arabs have a saying that the best dates have their feet in water and their head in fire, and the dates from around Basra are considered to be the sweetest in the world. Many canals also cross through Basra, once giving it the title “Venice of the East” — although in recent years these have fallen into disuse because of rising pollution and falling water levels.

The picturesque qualities of Basra have attracted a number of artists, poets and intellectuals over the years. Early on in its tumultuous history, it was known as a great centre of learning and theology and many figures important to the history of Islam were born or lived there, including the female Sufi mystic Rabia al-Basri and the polymath Alhazen. Perhaps most famously, it is also the city where Sinbad the Sailor began his seven voyages. An island in the river now bears his name in commemoration.

The etymology of Basra is uncertain, but some sources suggest it comes from the Persian Bas-rāh or Bassorāh meaning “where many paths meet.” In fiction, the city has sometimes appeared in novels characterised as a kind of geographic crossroads. In Voltaire’s Zadig (1747), the protagonist visits Basra and meets with travelers and religious leaders from around the world; “It was no little consolation […] to see so many men of different countries assembled in the same place. It seemed to him that the universe was one large family which gathered together at Bassora.”

In H.G. Wells’ The Shape of Things to Come (1933), he describes the Second Conference at Basra, a similar scene where world leaders come to meet and discuss important matters. In Wells’s future history, however, religious beliefs have been suppressed and, in an inversion of history, Basra is made the center state of an atheist world purged of Islam and all other major religions.