A Cultural Guide To The Kingdom Of Bahrain

The Gulf Kingdom of Bahrain remains a mystery to many travelers, who are unaware of its cultural and historical riches. Streetsmart Bahrain aims to change that, by offering a guide to the city from those who know it best, its creative residents; from an architect to a food writer, these cultural stars of Bahrain reveal the secrets of their country. 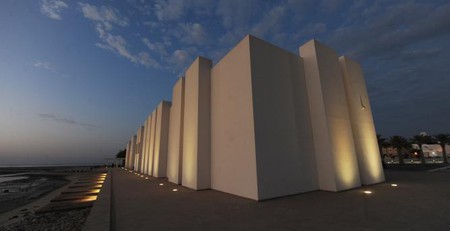 It can be hard to get under the skin of a new city or country, unless, that is, you have a resident friend showing you around. So a new travel guide to Bahrain decided to serve up a few proxy friends in its pages to provide some insider tips, alongside its listings, on what to see and do, where to eat and sleep and how to chill in the island Kingdom. Not just anyone has been selected as your personal guides, mind, but lifestyle-shapers such as artists, chefs, designers and DJs, who take you off the beaten track to discover some of their favourite haunts. As the former capital of Dilmun, an ancient civilization dating back to 2500 BC, with a long history of pearling and trading, the archipelago of 36 islands has rich and eclectic cultural offerings. The tips on offer follow suit, encompassing everything from archaeological sites and architectural gems to backstreet bakers, seaside shisha bars and tailors making suits to Savile Row standards for a snip.

Launched in 2012, Streetsmart Bahrain (by Melissa van Maasdyk, Streetsmart Publications Inc) comes out in iBook form in December 2013 with added features such as interactive maps, zoom-in images and a search facility, which, among other things, takes you directly to listing information for any of the places recommended by the book’s resident guides. Meet a few of them here and if they whet your appetite for further exploration, find the guide in the iBooks store. 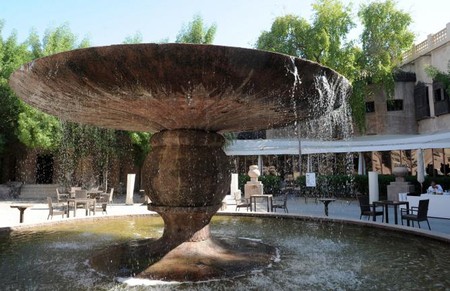 Living in New York, the things I miss most about Bahrain, apart from family, are the warmth of its people, its multifaceted cultures and the souqs, which still encapsulate the essence of historical Bahrain and are my favorite spots to photograph. I also love La Fontaine gallery, where I had my first exhibition in Bahrain. The venue is stunning and it’s a dream place to show one’s art. I also like the fact that it’s an all-encompassing place that has a romantic restaurant, unique live entertainment and a soothing spa. 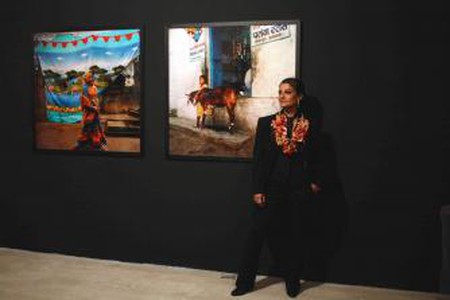 I can proudly say that Bahrain has many great eateries to fit any budget, but some of my favorite dishes come from small local places in the souq: Indian pastries like ladoo; the large assortment of fresh juices made for you on the spot to go with your samoosas, or just ‘desertifying’ yourself with a local favorite such as rose water with milk. When coming home, I also always look forward to our famous ‘khubz’ [flatbread] – nothing like it in the world – as well as my Mom’s chicken biryani, my brother’s shrimp machbous and lamb-tongue stew for breakfast – I know it doesn’t sound tempting but yum.

I really enjoy staying in humble places wherever I’m travelling. My favourite choice in Bahrain would be camping in the desert, whether it’s pitching your own tent or the luxury we have these days of renting one set up for you. As a child, most weekends our family would pack the car with food, tea, sweets and a rug, and head out to the desert – those are among my most memorable times. There are moments we all need to be pampered, though; for that I would head to Al Bander Resort, where one can feast on the most delicious seafood and smoke shisha by the sea before spending the night in their cabanas. Closer to the center, I enjoy the Ritz Carlton with its exclusive beach club.

Currently living in New York, Bahrain-born Ghada has won a number of international awards for her photography, which you can view at ghadakhunji.com. 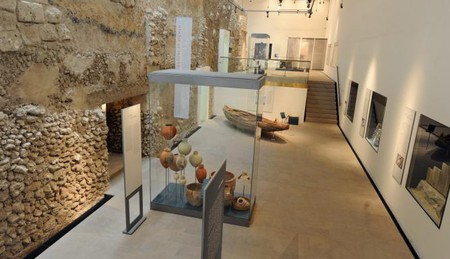 In terms of architecture in Bahrain, I would recommend visiting some of the traditional houses built at the turn of the last century. Sheikh Isa House in Muharraq and the Khalaf House in old Manama are great examples of traditional Bahraini architecture that incorporates natural ventilation systems, which are great to experience. I also like Al Jasra House for its proportions, simplicity and rural setting, and there are great examples of architecture from the 1970s; my favorite are the Golden Tulip hotel and Government House in Manama. In terms of contemporary architecture, I think the Bahrain Fort Museum is one of the best examples because it’s inspired by local architecture without falling into the trap of being a pastiche. 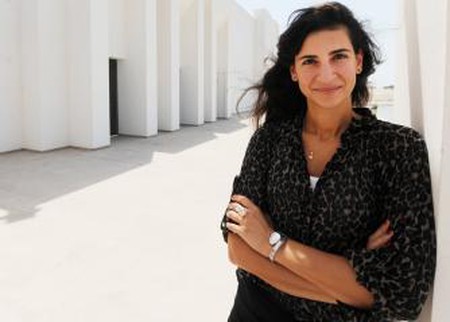 I generally enjoy simple places where you can eat outdoors. There’s a fish restaurant I like a lot called Tabreez, which is very basic but the fish is always fresh and tasty, and their lamb chops are the best. I also love getting fresh bread from any ‘khabaz’ [traditional baker].

I love driving through the rural areas in the northern part of Bahrain, starting at the Bahrain Fort and following the back roads to Budaiya Port. In places it’s hard to believe you’re in Bahrain because it’s so green and lush. I also like visiting Askar and Jaw, two fishing villages south of Sitra. There’s a small island off Askar’s coast with the remnants of a fort on it surrounded by old oyster beds, which is good for snorkeling when it’s cool. It’s about a 25-minute swim to it or you can ask one of the fishermen on the beach for a ride – they’re usually happy to oblige.

The Head of Architectural Affairs for the Ministry of Culture, Noura curated Bahrain’s award-winning exhibit at the Venice Architecture Biennale 2010, the focus of which was Bahrain’s fishermen’s huts. 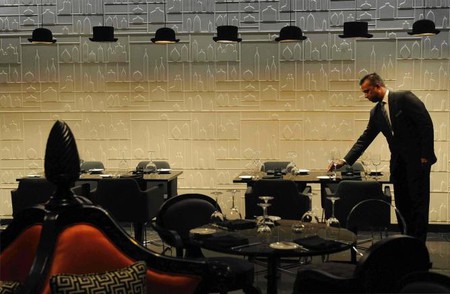 We used to have to travel to get a lot of things but now we can buy everything right here: you’ve got the high street, designers and the bazaar all covered. I get almost all of my suits made by a fantastic tailor in the souq called Sharafali for a fraction of the cost of Savile Row, though you couldn’t tell the difference – when travelling, I sometimes get asked where I bought something I’m wearing and I enjoy saying it was made in Bahrain. I also get shoes made by a shoemaker called Ghuloom, who has a shop near Awal Cinema. For the rest, I like buying high-street pieces while travelling and mixing them up with high-end pieces from Moda Mall, which has all the brands I like in one place: Dolce & Gabbana, Hermes, Louis Vuitton… I’ve recently spent a lot of time working there on the interiors for the luxury multi-brand retailer Al Othman, whose window displays I also design. 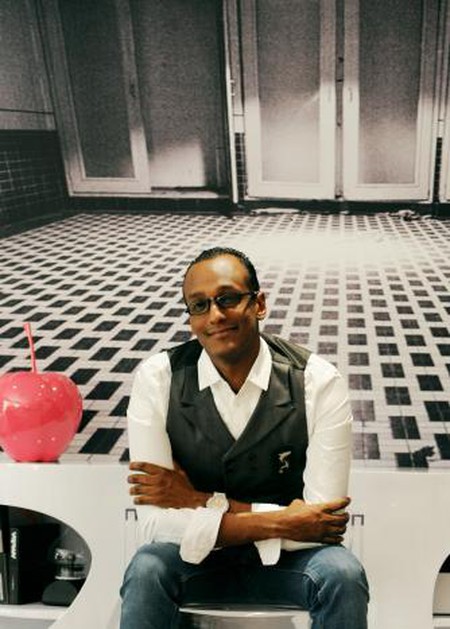 Nirvana at the Ritz is by far my favorite restaurant because it takes you on a journey with its excellent North-Indian food, musicians playing traditional music and the deep red walls that definitely open up the appetite. Friends Café is my best place for a homely meal, and there’s a tikka place I love called Tikkat Abul, where you drive up to the door and they bring you flatbread topped with these perfectly cooked cubes of meat on a tray that you eat right there in the car.

If I just want to relax, I like going to Layali Zaman early in the morning, when there’s nobody else around – just me and the sea – or late at night. They do fantastic juices and shisha and very good grills.

Apart from boutiques like Alothman, Ammar has designed museum spaces, cafés and restaurants, including the brilliant whimsical interiors of Plums restaurant at the Ritz Carlton Hotel. 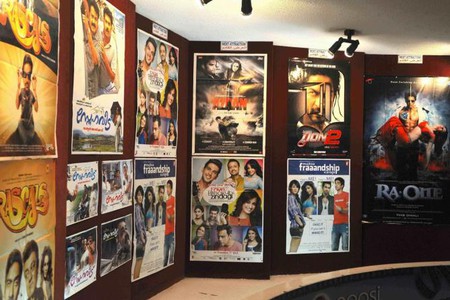 In most of my films I like to show the simple life in Bahrain so I do a lot of my filming in Muharraq, where you find authentic homes and local color. This is definitely the best place for visitors to discover the real Bahrain, particularly in the old coffee shops or chatting to fishermen just off their boats. I recommend walking along the stretch of coastline between the Sheikh Isa and Sheikh Hamad bridges, where there are lots of traditional fishermen’s huts on stilts. Don’t be surprised if you get invited in for tea; I was even offered a free fish on one shoot. 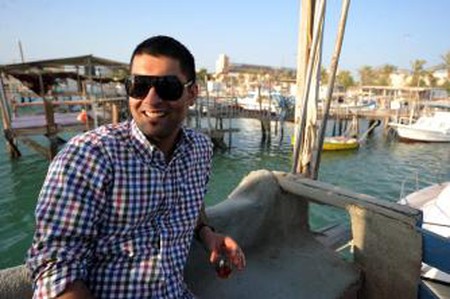 I don’t like places where I feel like I’m eating money, so I generally go to cafés offering good, reasonably priced food. After a Bollywood movie at Awal Cinema, I often go for tikka at Abu Hussain nearby, then move over the road to smoke shisha at Beirut Café. I also like Coco’s in Adliya because it’s homely and serves generous portions of really good food. The haloumi and strawberry salad is one of my favorite dishes and I love their watermelon juice and fresh peach iced tea.

I watch a lot of movies, both for inspiration and because I’ve always loved them, and divide my time between several cinemas; Bahrain City Centre and Seef Mall are good for the blockbusters, Al Jazeera in Muharraq has the cheapest tickets, and I go to the Bahrain Cinema Club most Wednesdays for art-movie screenings. I also enjoy smoking shisha and my favorite place is probably the Airport Coffee Shop in Arad. It’s not very traditional, but it’s popular with 20 to 40-year-olds, mostly men, who go there to chill down and play board games after dark. [From Muharraq, follow the signs to Hidd and Amwaj and look out for the blue and orange Momen sign on your right to find the Airport Coffee Shop next door.] 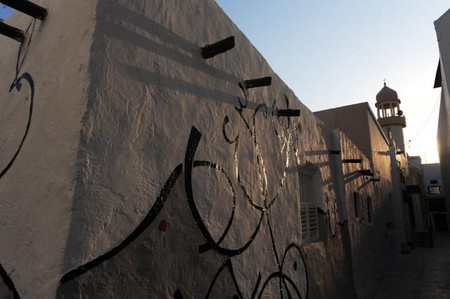 Artistic graffiti in a Muharraq Lane | Photograph by Phil Weymouth

A few years ago I compiled a Khaleeji cookbook based on recipes from family and friends in Kuwait and Bahrain. In both places, I spent several months researching (i.e. feasting) and taking photos of food culture. Bahrain stood out as a place where people appreciate good traditional cuisine, especially in the home. My best friend Razan’s family make the best food; their kebabs are famous and so are their Friday lunches. I was also impressed with Bahrain’s halwa industry, and the charming Hussain Mohammed Showaiter shop in Muharraq was a pleasure to visit. Invariably, a halwa-rahash swap results en route to or from Kuwait. 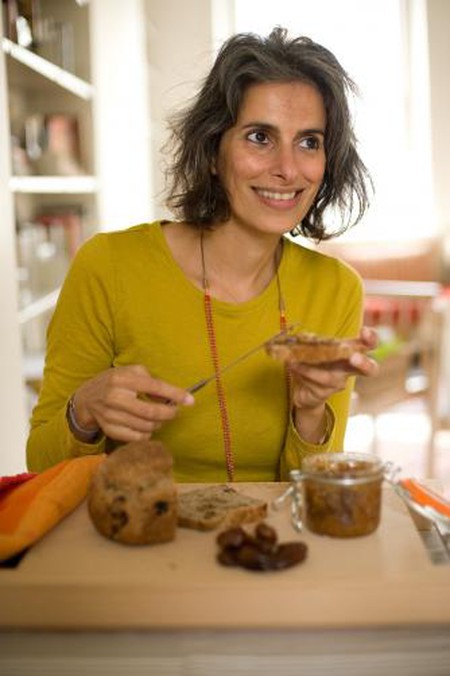 My new book is about dates, desserts and stories from around the world, so naturally I had to visit Bahrain, the land of a million palms, where I was taught to make khabees, a delicious date fudge and my favourite dessert. Here people are passionate about their date palms and the yearly harvest; they understand the fruit like few others. A short drive around Manama’s palm plantations is long enough to start counting to a million…

I’ve been visiting Bahrain from London for about 15 years and my trips are always a treat. Manama has a nice, laidback feel to it, people are friendly and open, and then there’s the weather, the sea and the spacious malls. For the book’s location images, I spent time in the souqs but also wandered through Muharraq’s restored historic centre with its courtyard houses, where I found echoes of the old Gulf, when living and sharing food with extended family and neighbours was a way of life.

Sarah is the author of the delicious Khaleeji cookbook Cardamom & Lime and also Sun Bread and Sticky Toffee: Date Desserts from Everywhere, both available on Amazon and, in Bahrain, at Virgin Megastore and Jashanmal.