10 Start Ups from Wales to Watch 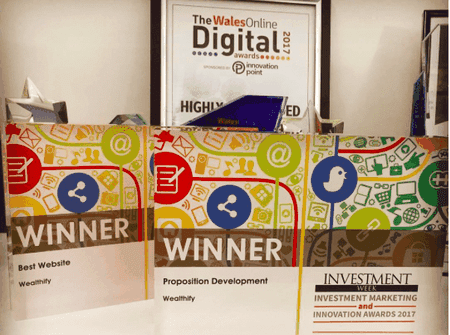 Wales is full of innovative new businesses, many of which are looking to do no less than transform the way we consume, live and interact. Here are some you’ll want to keep an eye on…

Doopoll was founded by Marc Thomas, Steve Dimmick and Sam Goudie in 2015.

Driven by a belief that common consensus and feedback should be heard and used, whether that’s to bring about necessary changes or to improve business functioning, Doopoll is an exciting company.

It markets itself as a ‘platform for engaging audiences and gathering opinion’ and makes polling simple by removing obstacles to getting feedback. It does this by providing the technology which gathers the views of, for example, customers or radio listeners, via online polls which are easy and fun to fill out. Those are then analysed quickly and effectively, so they can be put to good use.

Co-founder Marc Thomas speaking at the #OiConf this week.

Wealthify makes investing in things easy and accessible to anyone. It was founded by Richard Theo, managing director of ActiveQuote.com and wealth manager Michelle Pearce, who have combined their expertise to create the Wealthify app – technology which allows users to wisely invest their money without having to have the knowledge. It uses algorithms and the advice of a team of specialists to create investments portfolios for you. You can invest any amount, from £1 to £2 million.

Riversimple has developed the Rasa ‘network electric’ car powered by a hydrogen fuel cell. The car is as lightweight as possible, and its four electric motors (one in each wheel) both drive and stop the car, making it more efficient.

What’s especially interesting about Riversimple is that the company wants to change the way we consume cars. Instead of seeing their cars as products, they want customers to view them as a service – with a monthly fee one would pay to use the cars.

The aim is for the production models to be on the market in 2018.

A post shared by Riversimple car manufacturer (@riversimplemovement) on Aug 23, 2017 at 6:55am PDT

Wales is a hotspot for adventure with its scenery, natural attractions and big, open spaces. Much of this reputation centres around its zip-lining, with the world’s fastest zip wire at the country’s Penrhyn Quarry, Europe’s longest zip wire, the highest treetop wires in the world and Europe’s longest net walkway.

Zip World is at the fore of this movement with sites in Snowdonia, the underground Bounce Below, a kilometre long rollercoaster and Skyride, Europe’s highest giant swing. Next up for the firm is a zip wire taking users across the River Usk at Caerleon and reaching speeds of approximately 100mph.

Zip World Titan, pretty amazing if we do say so ourselves.  Photo by: @macyguytonx  #ExperienceAdventure

Nujded is another tech startup, this time focusing on health and happiness. It provides users with specially tailored and coordinated content, collecting data about your behaviour and converting it into actions you can take, helping you make the changes you want to.

Perpetual is a green technology start up, using the considerable power, efficiency and long life of lithium ion cell technology which replaces traditional lead batteries. Perpetual is going places: It received a £500,000 equity investment from Finance Wales, won ‘Green Start-up of the Year’ at the Wales Start-up Awards and is a ‘One to Watch’ at the Wales Green Energy Awards.

The idea behind app and online market place Paperclip is simple: it allows users to buy, sell, swap and give away second-hand items with other Paperclip users in your area. You are given access to thousands of things on sale near you and can buy them at the touch of a button. Selling something is made easy too, and you can opt to negotiate your price as well.

Smart Polish Pro is an attempt to revolutionise the way we clean cars with environmentally friendly waterless products. Founded just two years ago, the start-up is already doing well, with thousands of motorists replacing traditional methods with Polish Pro, shipping to 55 countries.

Cactus Options does no less than boost the number of students going on to higher education by increasing the chances of them being able to take the subjects they want. Usually when a student goes to pick their A-levels, they’ll find the subjects are grouped into columns, meaning if two or more subjects are in the same column, they can only choose one. This results in some going to a different school so they can have a different set of options, leaving school entirely or drop out later when they’re forced to take subjects they are less than passionate about.

Cactus Options solves this issue by collecting data on prospective A-level students’ subject preferences, and it calculates options which increase the chances of students getting to take what they want.

Thaw Technology invented Use By Mate which reminds users the expiration dates of items in their fridges via push notifications on their phones in a bid to reduce waste. They also cleverly give recipe suggestions on how to use up food. Just three months after launching, the idea was crowned highest subscribed Innovate UK competition ever.