Fun Things to Do in Brecon Beacons National Park 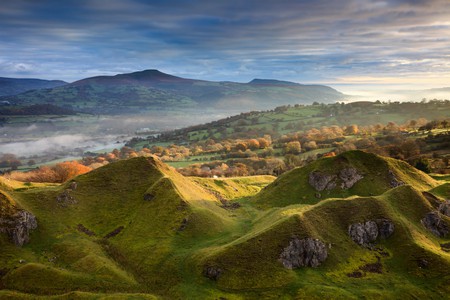 The Brecon Beacons National Park is home to stunning natural attractions, with dramatic mountains, pristine lakes and lush green landscapes. One of the most beautiful areas in the United Kingdom, it’s a perfect place to spend a weekend in nature.

There’s even more to this Welsh national park than just nature, with loads of fun activities and modern attractions. Here’s our pick of the best…

There are tons of festivals throughout the year, which reflect Welsh traditions and passions – such as food, drink, arts, music and entertainment.

They include Hay Literary Festival, Green Man Festival, Brecon Jazz, and Abergavenny Food Festival as well as many walking festivals. Check online to see which ones are running when you plan to visit.

Geocaching is a fun, treasure-hunt-style activity combining outdoor adventure with technology. It involves downloading the app and using GPS to look for geocaches (typically a small waterproof container hidden somewhere outdoors, containing a logbook to be signed by those who find it).

There are more than 180 geocaches in the Brecon Beacons National Park. Just go to the geocaching website. If you don’t have a smartphone and want to do it without GPS you can even use an Ordnance Survey map and compass.

Look behind a waterfall

Waterfall Country is named so, predictably, for its numerous waterfalls. Walking through forests and along rivers, you’ll come across plenty of cascades. The most well-known and Instagrammed is Sgwd yr Eira, because there’s a path running behind it so you can stand and watch the water tumble right before your eyes.

You can reach Sgwd yr Eira by walking around 4km (2.5 miles) from the village of Pontneddfechan, following the plentiful signs. 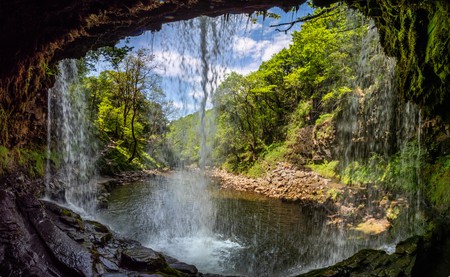 Soar over the hills

Wales is hilly and mountainous, lending itself very well to sports like paragliding. Go to dizzying heights hundreds of miles in the air and then glide over the grassy land below.

There are lots of schools where you can train and learn about hang-gliding, power-kiting and paragliding. The South East Wales Hang gliding and Paragliding Club is a good place to start.

Say boo to a ghost

The Skirrid Mountain Inn is said to be Wales’s most haunted pub, and with more than 900 years of history you can see why. If you love ghostly goings on, you could also go on a ghost tour at Craig y Nos Castle, which has featured on TV’s Most Haunted.

The Inn is in the tiny village of Llanvihangel Crucorney, which is also surrounded by gorgeous walking routes if you want to get outside and away from the ghouls.

With so much open space, it’s no wonder the Brecon Beacons offers places to golf in style. At the super scenic Cradoc Golf Club, you can’t go wrong. Jump in a caddy and get swinging.

With a large network of caves, The Brecon Beacons National Park is a great place to go caving. Many are only suitable for professionals, but there are companies with experienced guides who will take you out to the most fun and accessible ones.

It’s sure to be an exhilarating day out as you get deeper and deeper underground, weaving between stalagmites and stalactites. This isn’t for the claustrophobic or for those who don’t like getting soaked, though, as the tours often involve submerging yourself in underground rivers.

With a wealth of countryside to farm, its no wonder there are some great eateries dotted around the park.

Those include some gourmet restaurants such as the Michelin-starred Walnut Tree in Llanddewi Skirrid. Also try The Felin Fach Griffin outside Brecon and Gliffaes Country House Hotel, near the village of Crickhowell.

Look to the stars

Brecon Beacons National Park is recognised as an International Dark Sky Reserve. To understand how big of a deal that is, you have to know that there are only 11 of these reserves anywhere on the planet.

There are various recommended stargazing sites all over the park, but you can do it pretty much anywhere on a clear night and you’ll see the entire Milky Way stretching out before you.

The Brecon area is home to all kinds of different birdlife, including the once endangered red kites and rarer birds like lapwings and waxwings and nightjars. Even if you aren’t a practised twitcher, you can easily while away some time watching our feathered friends.

Once again there are birdwatching spots all over the park, but if you want to be guaranteed a sighting, the Red Kite Feeding Station in Llanddeusant is a very safe bet.

A number of different films were shot in and around the Brecon Beacons, including An American Werewolf in London and Killer Elite, but perhaps the most famous recent example was The Dark Knight Rises.

You can visit the site which was used for the film – a waterfall cave called Henrhyd Falls – and explore the majestic surrounding area.

You don’t need to go to Stonehenge to look at mysterious prehistoric architecture. Standing stones are large rocks purposefully erected in prominent areas of land, no one knows when exactly, or why, but you can find them in various places around the UK, and Brecon has more than 30 of them. Maen Llia is the best known, and is said to date back to the Bronze Age. 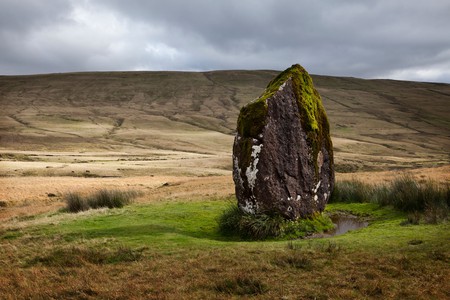