A Historical Guide To Scottish Whisky 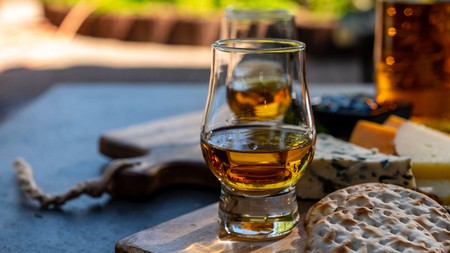 Travel and food writer Graeme Taylor embarks on a tour of Scotland to explore the rich history of Scottish terroir that results in Scotland’s unique regional whisky, and discovers how whisky matching pairs perfectly with the wonderful natural larder of the country as an excellent accompaniment to a traditional Scottish meal.

An Introduction To Scotland And Her Whisky

The French have a word, a romantic and mystical term, for the synergy between soil, climate and topography. It is this synergy that creates the finest of wine. They call it terroir, and it lacks any English translation. Although no such word exists in Scotland for the effect that locality, water, fuel, still and soil has upon the spirit known in Gaelic as uisque beath: ‘the water of life’, the effect which locality has on malt whisky still finds its way into our land. Whether a big hit of brine and peat from an island on the north or west coast, a soft floral sweetness from the Lowlands or the rich spice and malt flavours from a Speyside powerhouse, each distillery in Scotland produces a flavour all of its own within its own little nook or glen. 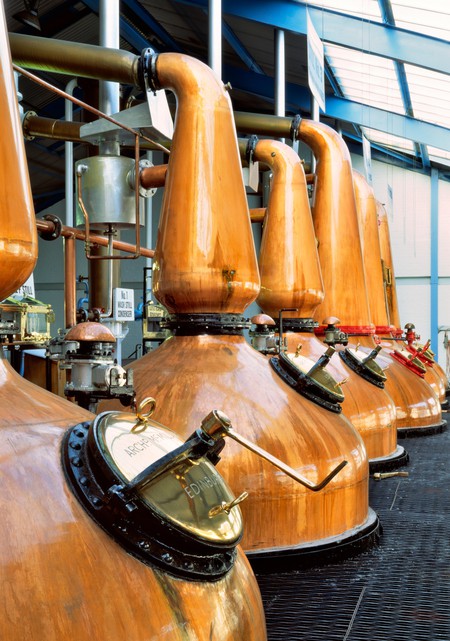 To think that single malt Scotch whisky is made of only three ingredients; water, malted barley and yeast which then must be aged in Scotland in oak casks for at least three years to be called Scotch whisky, it is difficult perhaps to understand how the spirit varies so widely in character. Location plays a huge role as the water source can vary greatly, whether running through ancient rock for high purity or trickling through peat giving it a much different character. Air can be heavy with salt in coastal areas imparting a marine note during maturation; the barley could be dried over peat, which again imparts a flavour to the spirit. Also the manmade elements vary; the distillation stills could be tall or squat, the barrels sherry or bourbon cask, the ageing time short or longer. Each distillery very much works to its own formula, thus the whisky landscape of Scotland is both complex and enchanting. To fully appreciate and breathe in the mystery and romanticism of this vast route, it is best to take a walk through the whisky map of Scotland.

If you were to embark on a journey to explore Scotland’s distilleries, Bladnoch on the far south coast notwithstanding, it would be a fairly cyclical voyage anti-clockwise from the largest city of Glasgow. As you progressed you would see the character of the spirit generally increase in robustness of flavour until your final sojourn across the sea to Islay, an island with a population of only 3500, yet home to no fewer than eight distilleries with a ninth on the way. 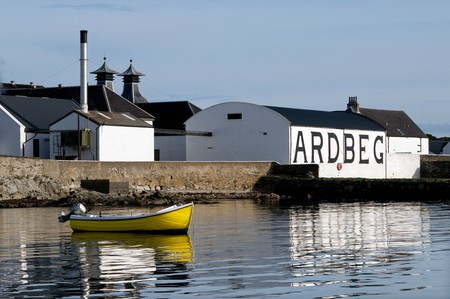 The Gentle Lowlands And Southern Highlands

Lowland malt whiskies were traditionally triple distilled as opposed to the standard double distillation of Scotch whisky. Therefore the lowland style of malt is typified by light, floral, aromatic flavours, very much reflective of the gentle countryside in the population dense central belt of Scotland. Almost equidistant from the centre of Glasgow you come to both Glengoyne and Auchentoshan distilleries. Auchentoshan is now the only Lowland distillery to operate the triple distillation technique as standard, and the Auchentoshan whisky is characterised by citrus, lemongrass and ginger type aromatic flavours and perfect as an aperitif, while Glengoyne is more medium bodied and a little sweeter. If you travel east from Glasgow by train to Edinburgh you will see the more poignant side of the whisky story as the train passes the old St. Magdalene distillery, the former distillery buildings well preserved as residential flats and a reminder of the dark days which the industry endured in the 1980s.

However heading north by car on the A9 you pass into the Highlands and the whisky character continues to change. Deanston, Aberfeldy, the smallest malt distillery at Edradour, and then Dalwhinnie deliver fruity, sometimes nutty malts, often with hints of aromatic spice such as vanilla. These are the oft-forgotten distilleries of the traveller heading to the whisky mecca of Speyside, a region which can loosely be defined as stretching from Inverness to the east coast. 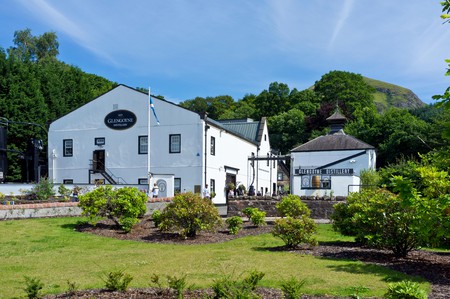 With the mighty River Spey, the fastest flowing in Scotland cutting like an artery through its centre, this is the home of Glenfiddich, The Macallan and and many more distinct styles of whisky. Epitomised by its elegant complexity, Speyside is very much the heartland of whisky production on mainland Scotland. Macallan, Glenfarclas, Cardhu and Aberlour, which lie beside the River Spey itself, have an intense sherry character yielding rich malts with toffee and honeyed flavours, while Glenfiddich, that, in spite of the distillery’s fame, remains family owned, has a more fruity note in younger expressions which gives way to spice in older varieties. Add to this the likes of anCnoc and Tomatin which have a more ‘traditional’ spirit flavour and the character of Speyside whisky is revealed as being as diverse as it is typical. The Highland whisky map is completed further north in Ross & Cromarty, with Glenmorangie delivering more delicate floral flavours than the salty sweetness of Old Pulteney and Clynelish. 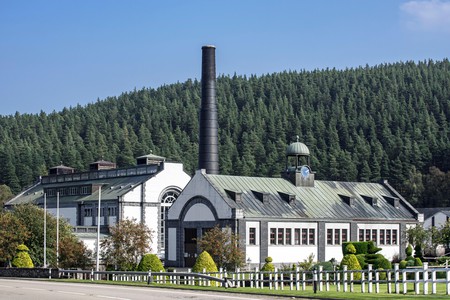 The Mystical Ancient Islands Of North And West

Scotland is a land of many unique islands, surrounded by green blue seas and punctuated by beaches of silver sand, ancient imposing mountains, standing stones and fairy glens; island malts have a distinctiveness all of their own. Highland Park from Orkney in the north and Talisker from Skye to the west sit proudly guarding their coastline and bring to mind ancient days of fire and smoke on these mystical prehistoric lands, full of peat and brine and complexity of character. Travelling south you’ll also find distilleries on the islands of Mull, Jura and Arran. However the final leg of this journey will take you to the traditional heart of west coast distilling on two more ‘islands’.

Campeltown at the far tip of the Kintyre peninsula was regarded by the Vikings as an island as they could carry their longboats from one coast to the other, was formerly a town of over 30 distilleries and is classed as a region in its own right. These days there are three operating distilleries in the town, but one, Springbank, is the name that is automatically conjured when one thinks of this outpost. The distillery is self-contained with everything from malting to bottling happening on site and is home to three individual malts of different character. Springbank whisky itself uniquely goes through two and a half distillations and is typified by an elegant briny sweetness. Just to the north of Campbeltown lies the ferry awaiting your sailing to Islay, an island known for full bodied whiskies heavy with peat, seaweed and iodine. 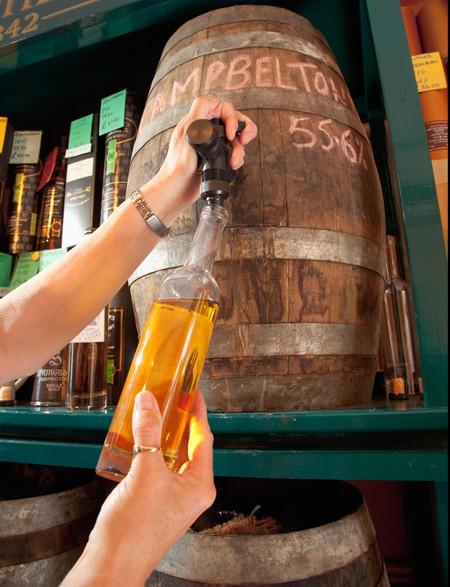 However this only tells part of the story of this enigmatic island. The southern heavyweights of Ardbeg, Lagavulin, Laphroaig and the long silenced and wistfully remembered Port Ellen are all reflective in different ways of this character. However Bunnahabhain to the north, known as the gentle spirit of Islay, is a lighter, nuttier whisky, while the island’s oldest distillery of Bowmore, buffeted by the Atlantic Ocean, has a fresher maritime surf character alongside the peat. Islay is a microcosm of Scotch malt whisky production with a real reflection of the terroir of the most remote of the south western islands. 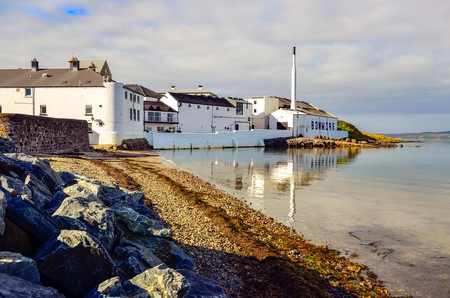 The whiskies of Scotland are reflective in every way of this ancient and rugged, yet romantically fascinating land, and there is a growing understanding that Scottish whiskies are much more than a drink to be enjoyed alone. They also marry perfectly with the wonderful natural larder of the country as an excellent accompaniment to a meal. Scottish cuisine is more about the quality of produce than just the recipe, and it is whisky that complements it best. Traditionally confined only to accompanying haggis for a Burns Supper, or even wastefully as the ‘gravy’; the world is now awakening to the prospect of whisky matching just as you would with wine. The malts of Speyside, which are rich with sherry character and complexity, are perfect accompaniments to both long slow cooked red meats or chargrilled and barbecued steaks of Scotch beef or venison. 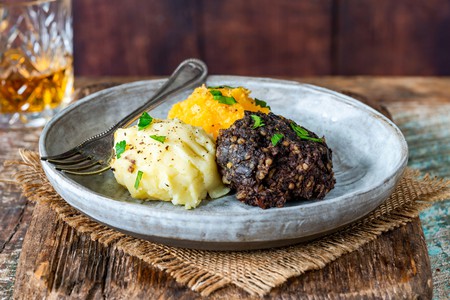 Lighter malts from the Lowlands and southern highlands with a more floral and fruity palate pair well with lighter soups such as consommé or with pates and charcuterie. The malts that are born by the sea are natural companions to seafood, and pairing oysters particularly delivers a perfect balance between brine, malt and sweetness. Desserts are matched well with cream based desserts like cranachan complementing the natural sweet, spicy and fruity characters prevalent in many whiskies with dark chocolate being another especially good match. Cheeses are a bit of a conundrum, but before reaching for the port try a lowland malt with soft creamy crowdie or Brie, a sherry driven Speyside with a hard cheddar or Dunlop and pair a rich blue with a smoky peaty island malt.

The malt whisky landscape of Scotland is both complex and welcoming to connoisseur and novice alike. There is a wealth of flavour possibilities that await those who step inside the distilleries, simply uncork a bottle or share a dram. There is no doubt that this is the best way to experience the passion, mystery and romanticism that is Scotland. 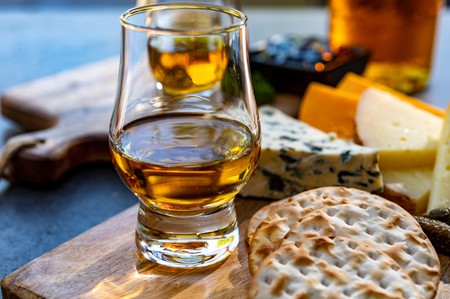