What Happened to Edinburgh's Notorious Grave Robbers, Burke and Hare? 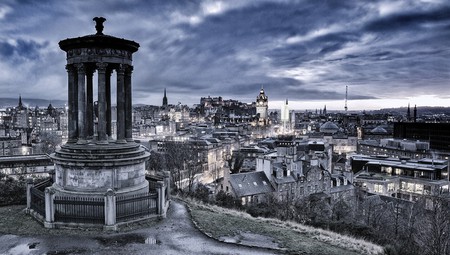 The sinister deeds of Burke and Hare have become popular lore in Scotland. The murderous acts of this terrible twosome are embedded in the history of Edinburgh‘s dark underbelly, expounded upon to frighten children and tourists alike. But in the intervening centuries since their bloody heyday, myth and history have become inextricably blurred. And so, if you wish to discover the truth about Burke and Hare, read on… if you dare.

During the early 19th century, Edinburgh was at the height of the glorious Scottish Enlightenment, a period of unparalleled scientific and intellectual achievement. In the field of medical science and anatomical studies, the city quickly became a major European centre: Sir James Young Simpson was discovering chloroform anaesthesia, and Dr Joseph Lister was pioneering the use of antiseptic during surgery. Ideals of progress and reason flourished as never before.

And yet, these advances in modern science were underpinned by something horribly sinister. In order to carry out their trailblazing research, the medical school at the University of Edinburgh required a steady supply of cadavers; however, according to Scottish law, only the corpses of those condemned to death were allowed to be dissected. Thus when the 1823 Judgement of Death Act decreased the number of deaths punishable by death, it led to a shortage of bodies and resulted in medical schools offering to pay a premium for corpses – the fresher the better. 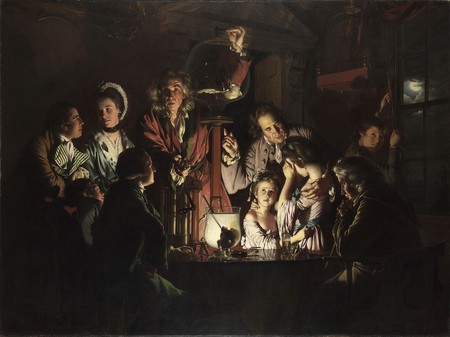 An Experiment on a Bird in the Air Pump | Joseph Wright of Derby [Public domain], via WikiCommons

Contrary to popular belief, Burke and Hare were not grave-robbers. Grave-robbers, or ‘resurrectionists,’ disinterred the bodies of the recently deceased and sold them to medical researchers. Increased demand for cadavers resulted in a frenzy of such ‘resurrections,’ causing rich families to purchase heavy stone slabs to be laid over the graves, or build watchtowers in cemeteries in order to deter grave-robbers from exhuming their loved ones.

Instead of waiting for people to die, Burke and Hare decided to create their own supply.

Both originally from Ulster, they had come to Scotland to work on the Union Canal, and settled down in Edinburgh with their common-law wives. The two men became fast friends when Burke moved to Tanner’s Close, where Hare and his wife ran a boarding house.

Their first experience of the cadaver trade occurred in December 1827, when one of Hare’s tenants, an army pensioner named Old Donald, died whilst owing Hare £4 in rent. This debt led the two men to decide to recoup Hare’s losses by selling Old Donald’s body to the medical school. After the carpenter delivered Old Donald’s coffin to the boarding house, Burke and Hare weighed down the coffin with tanning bark. They then took the body to the University of Edinburgh, where Professor John Knox, a popular anatomy lecturer, purchased the body for £7 and 10 shillings. 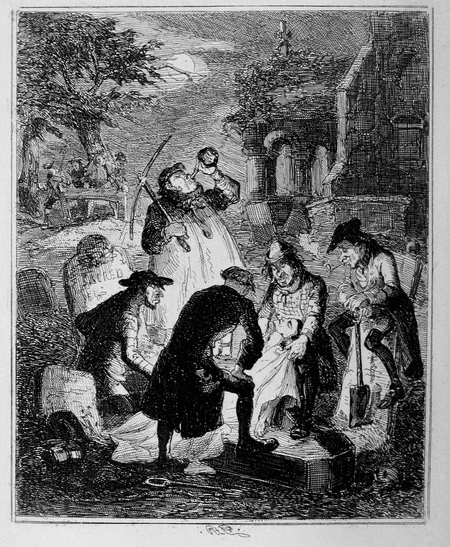 Months after selling Old Donald’s body, the two men committed their first murder. Another one of Hare’s tenants named Joseph fell sick with fever, and Hare worried that his illness would be bad for business. Hare again enlisted Burke and, after plying Joseph with whisky, Hare suffocated the victim while Burke lay across his torso, immobilising Joseph. This time, Dr Knox paid £10 for the body.

Spurred on by the easy money, Burke and Hare went on to commit at least 16 murders over the course of 10 months. They targeted Edinburgh’s poorest communities – people they felt whose absence would arouse the least suspicion. They murdered prostitutes, street sweepers, an elderly grandmother and her mute grandson, even a relative of Burke’s wife. They sold the bodies to Dr Knox, who never asked questions. Burke and Hare’s greed became insatiable; however, they also became careless.

In April, Burke invited two women, Mary Paterson and Janet Brown, to his home for a drink. Though Janet left after a few hours, Mary fell asleep at the table and was murdered by the two men. Months later, they sold the body of a well-known disabled children’s entertainer named ‘Daft Jamie’ to Dr Knox. Several of Knox’s students recognised both Mary and Jamie’s bodies, and suspicions surrounding Dr Knox’s suppliers were aroused… 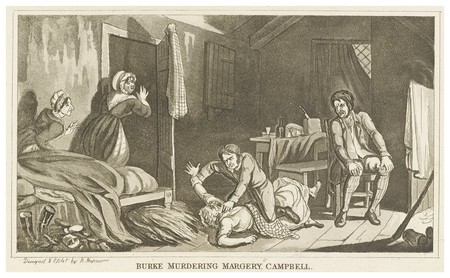 On Halloween 1828, a couple named James and Ann Gray were staying with Burke. As Burke and Hare had a victim in their sights – an Irishwoman named Margaret Docherty – they asked the Grays to stay at Hare’s boarding house for the night, so that they could murder Margaret at Burke’s home. When the Grays returned to Burke’s home, they were confused as to why Burke would not allow them back into their room. As soon as they were left alone, they entered the room – only to find Margaret’s body under the bed.

The Grays went to the police, who arrested Burke and Hare. Their investigation led them to Dr Knox, who denied any knowledge of the murders, but Janet was able to identify Mary Paterson’s clothing that was found at the boarding house. And yet, without hard evidence linking Burke and Hare to the string of murders, the Lord Advocate offered immunity to Hare in exchange for testifying against Burke, which Hare did gladly.

Burke was hung at Lawnmarket to a raucous crowd on 29 January 1829 and – ironically – had his body donated to science. His skeleton resides at the University of Edinburgh’s medical school to this day.

Hare’s fate, however, is unclear. After his release, he fled across the border to England and was never heard from again. 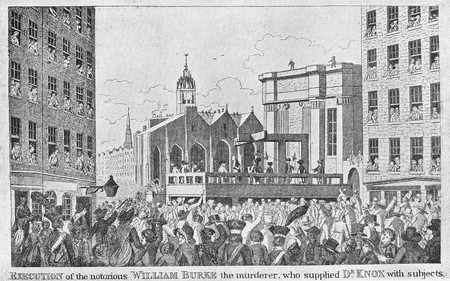 Execution of Burke in the Lawnmarket, Edinburgh, 28 January 1829 | Public Domain via WikiCommons
Give us feedback