The Top 10 Sculptures In Glasgow

Brimming with monuments designed by illustrious artists and architects including Charles Rennie Mackintosh and Andy Scott, Glasgow is a true Scottish city of sculpture whose residents take art seriously. With various plans for more urban regeneration being put in place every year, and new public artworks popping up all over the city, visitors can view historical and contemporary masterpieces wherever they are in the region. Here’s our list of the top 10 sculptures to explore whilst visiting Scotland’s creative capital. 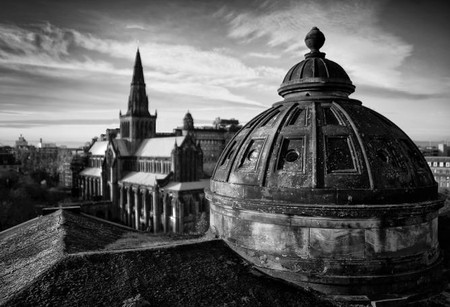 The Duke of Wellington

Situated prominently on Royal Exchange Square, The Equestrian Statue of the Duke of Wellington has come to be one of Glasgow’s most well known and symbolic landmarks. The statue was erected in 1844 and is Carlo Marochetti’s iron interpretation of Arthur Wellesley, the first Duke of Wellington. Wellesley was an Irish statesman and general during the Napoleonic wars in the 19th century, renowned for his strategic prowess and bravery in battle. For the last three decades however the statue has come to take on a contemporary significance for the city, being mostly found with a traffic cone propped on the duke’s head. This fun, almost ritualistic Glasgow tradition has come to embody the city’s dark humor and anti-authoritarian spirit, and has made the statue a comical and significant landmark for its citizens. In 2013 Glasgow City Council submitted a planning application attempting to ban the cone, to which residents reacted by creating a 10,613 signature petition urging against the ban. This ultimately led to the council dropping their proposal, an event seen as a pivotal local triumph. 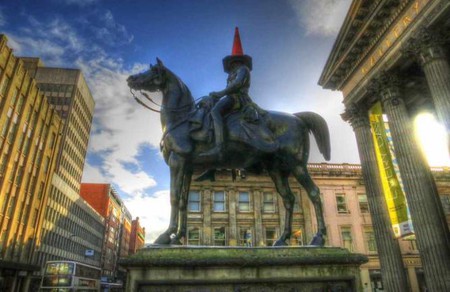 The Duke of Wellington Statue at Royal Exchange Square | © PaulWalter/Flickr

The 1971 Ibrox disaster was a tragic event still mourned to this day by Glasgow citizens. During a football game at Ibrox Football Stadium between the city’s two largest teams, Rangers and Celtic, a large surge of fans attempting to leave the game caused 66 people to be killed in a crush, with 200 more being injured. Designed by influential public artist Andy Scott, the sculptor behind a number of other important UK monuments including The Falkirk Kelpies, this poignant statue commemorates the lives of those lives lost in the accident. Erected on the 30th anniversary of the incident, the bronze statue is of Rangers legend John Greig, the team’s captain on that fateful day. A poignant spot which has become a focal point for the friends and relatives of the victims, this memorial is one of Glasgow’s most stirring and affective works of art. Those wishing to see more of the artist’s work can take a short drive to Greenock and view Ginger the Horse, a gorgeous smaller version of The Falkirk Kelpies.

Diagram of an Object 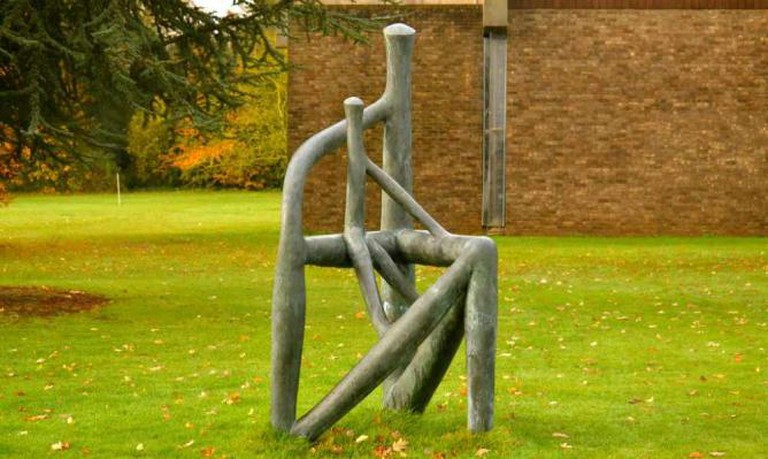 Diagram of an Object Variation by Dhruva Mistry | © ptwo/Flickr
Located at the entrance to The Hunterian Museum and Art Gallery in Glasgow’s West End, visitors can spend some time deciphering this contemporary wonder and contemplating its meaning. The work was created by Dhruva Mistry, an eminent Indian sculptor and artist, and a member of The Royal Academy of Arts. Hailed by critics as a modern masterpiece, this abstract bronze sculpture is deliberately ambiguous and can be interpreted in a number of ways, the most common of which is of a mother with a child on her knee. Conceptual, imaginative and addressing a number of cultural and social issues, the artist’s work promises to be inspiring, and with a location at the door to one of Scotland’s best galleries, there is nothing for culture seekers not to love.
Open In Google Maps
82 Hillhead Street, Glasgow, Scotland, G12 8QQ, United Kingdom
+441413304772
Visit Website
Give us feedback

Those interested in comic books will particularly enjoy a visit to the Lobey Dosser statue in the city’s trendy West End. The structure was built to commemorate legendary Scottish cartoonist Bud Neill, creator of the Lobey Dosser cartoon series, whose fan base stretched all the way to the USA. Set in the Wild West, yet maintaining an all-Glaswegian character list known for their heavy Scottish accents and dialect, the strip was a cult classic celebrating the Glasgow vernacular and attitude. The statue features main character Lobey atop of his trusty steed El Fideldo, and was commissioned entirely through donations from fans after the Glasgow Herald issued an appeal to have Neill’s legacy commemorated. 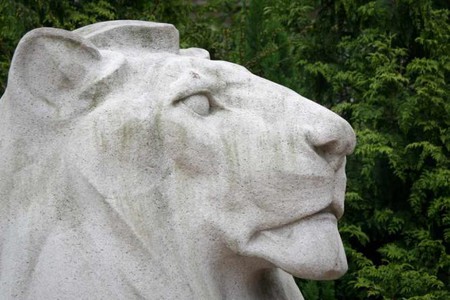 Memorial
Facebook
Email
Twitter
Pinterest
Copy link
Share
Map View
Glasgow’s George Square is home to a number of interesting sculptures and monuments, including a memorial of Sir Walter Scott and a regal equestrian statue of Queen Victoria. The most notable of these works however isThe Cenotaph, erected in 1922 and situated at the East boundary of the square. This granite tower soars 9.7 metres in to the air and features an intricate gilded metal cross in the shape of a sword, designed to commemorate those Glasgow citizens who lost their lives in World War I. The monument, created by Edwardian architect Sir John James Burnet, is guarded on both sides by two impressive stone lions, symbolizing the bravery and endurance of those who perished. One of the city’s most photographed sites nestled right in the heart of the town center, the monument is the perfect place for reflection, thought and art appreciation.
Open In Google Maps
Glasgow, Glasgow, Scotland, G2 1DH, United Kingdom
+441412878349
Give us feedback

Building, School
Facebook
Email
Twitter
Pinterest
Copy link
Share
Map View
Two of Glasgow’s oldest portrait statues, these monuments were constructed in the 17th century by mason and builder James Colquhoun, one of the finest Scottish sculptors of his day. The stone statues were made to commemorate the legendary Glaswegian philanthropists George and Thomas Hutcheson. These two brothers donated part of the fortune they made as lawyers to create both a hospital for poor craftsmen and a school for orphans, giving them an almost saintlike status in the local community. The statues were initially placed outside the original Hutcheson Hospital before its demolition in the 18th century. The hospital’s patrons then went on to buy grounds on Ingram Street where they constructed a new school and office building named Hutcheson’s Hall, and it is here where the statues are now placed. The hall itself is now home to an upmarket bar and brasserie which maintains its historical name of Hutcheson’s, where the statues can be seen taking pride of place at the front of the building’s exterior.
Open In Google Maps
Glasgow, United Kingdom
Give us feedback

This stunning piece of modern sculpture work is situated in the Italian Center, an office, restaurant and retail space designed to resemble an Italian style palazzo in the heart of Glasgow’s Merchant City. Shona Kinloch’s somewhat humorous piece features two figures, a man and a dog, sitting on granite stones above a water piece and looking to the sky in rapture. Equivocal and deliberately questioning, the beloved ‘Bella’ has never been formally explained by the artist, with her identity being a common topic of artistic debate in the area. Fitting in perfectly with its stylish surroundings, Thinking of Bella is a much-valued piece of public modern art that makes for a moment of inquisitive observation in Glasgow.

Created by Stanley Bonnar, a sculptor who has worked as the resident town artist for Glenrothes, Stonehaven and East Kilbride, this piece offers a chance to view art by one of Scotland’s finest creatives. The Community is a fibreglass sculpture showing the figures of four people, all of whom are of different age ranges, standing together and looking outwards at their surroundings. Commissioned during a refurbishment of the statue’s surrounding area, the work symbolizes the solidarity of Glasgow’s people and their sense of togetherness as they embark on bigger and better projects. Emblematic in its concept and touching to view, visitors can take their own interpretation from the work and be sure to leave feeling uplifted and inspired, which is the monument’s sole purpose.

Those arriving into Buchanan Bus Station will not miss The Clyde Clock, a wonderfully creative structure perfectly fitting its fast-paced urban location. This 20-foot-high stainless steel clock is suspended on two long legs made to seem like they are in motion, running to get somewhere. Situated in one of the city’s busiest areas where commuters and travellers are often rushing on to their next location, the clock is undoubtedly ironic and raises more than a few laughs in its passing. Commissioned by Radio Clyde to celebrate its 25th birthday as an independent radio station, the clock is the work of Scottish artist George Wyllie. Both practical and architecturally significant, the clock is a contemporary gem and well worth a visit, just minutes from Glasgow’s best shopping streets. 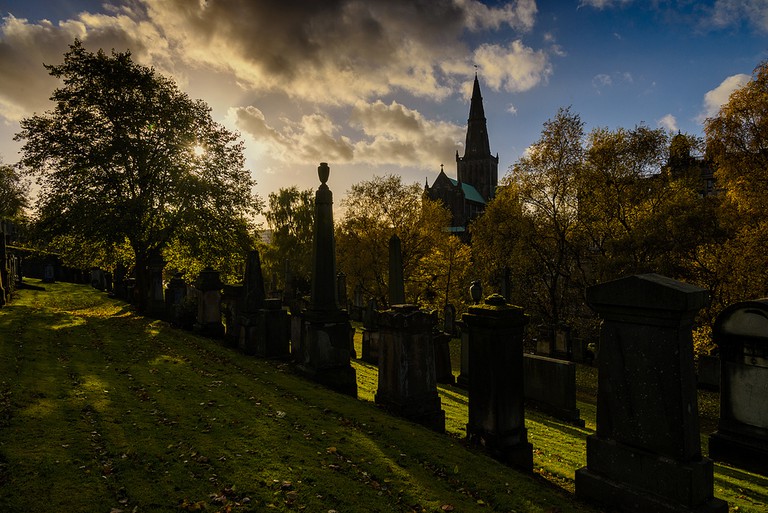 The Necropolis | © Robert Brown/Flickr
For visitors wishing to view not one but hundreds of beautiful monuments all in one place, the Glasgow Necropolis Victorian graveyard is the place to go. Spread across the hill behind Glasgow’s most important and jaw-dropping piece of Gothic architecture, St Mungo’s Cathedral, the silhouettes of the gravestones in the distance are an awe-inspiring sight to behold. There are a number of important Victorian tombs and structures here, including the intricate art-nouveau tomb of Walter Macfarlane, once a member of one of Glasgow’s most important ornamental ironwork manufacturers, The Sacaren Foundry. Venture further and visitors will find statues by Robert Forrest, Alexander ‘Greek’ Thomson and Charles Rennie Mackintosh, artists and sculptors once at the forefront of their fields. Be sure to visit the impressive Mausoleum of Major Archibald Douglas Monteath, a large, tiered building set in an octagonal shape, a design created by leading 19th century architect David Cousin. Glasgow Necropolis, Wishard Street, Glasgow, Scotland.By Megan O’Hara
Open In Google Maps
Castle Street, Glasgow, Scotland, G4 0UZ, United Kingdom
+441412875064
Visit Website
Give us feedback
Give us feedback