The Most Beautiful Stately Homes in Scotland 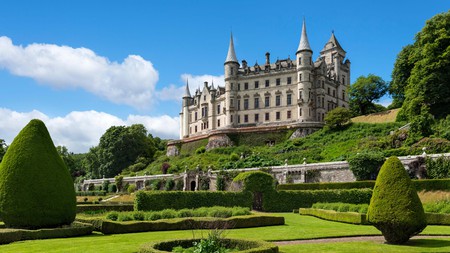 Threaded into the otherworldly landscapes, Scotland has an abundance of grand stately homes and snow-capped castles in its architectural repertoire. A whole world of historic buildings with stories as vibrant as their interior embellishments, step into Scotland’s bygone past with our edit of the Scottish stately homes you simply must see. 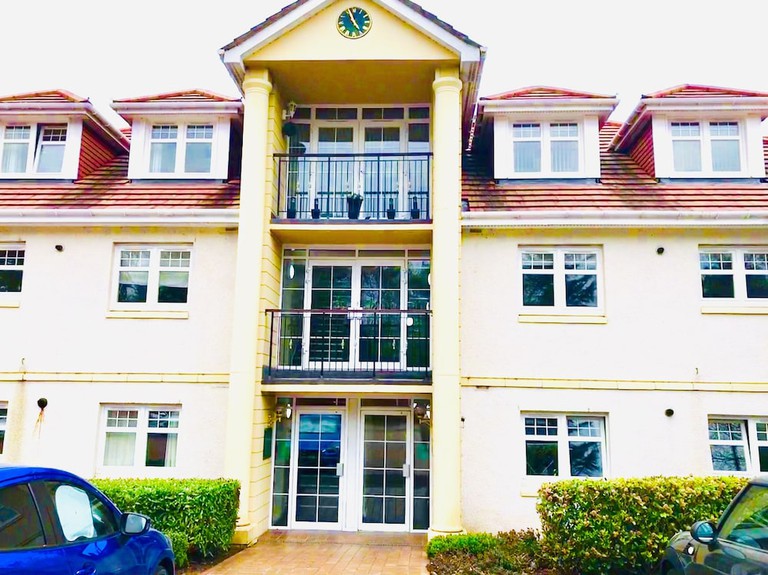 Abbotsford House, former home of the novelist and poet Sir Walter Scott, Melrose, Scottish Borders, Scotland, UK | © Ian Dagnall / Alamy Stock Photo
View More
Unavailable for the next 3 months
A handsome home draped in ideas and epiphanies, exploring Abbotsford House and its blissful fragrant gardens is like entering into the subconscious of Sir Walter Scott. Each stone slab, each meticulously picked collectible, each minute yet compelling detail, offers a fleeting snippet of his many ponderings, idiosyncrasies and interests. Described by this prolific 19th-century Scots writer as ‘romance in stone and mortar’, Scott bought the land in 1811 and built the house as we view it today in three stages, before planting tribes of trees and renaming it Abbotsford. As expected, the library is a book-lover’s dream. Live like royalty by booking a stay in a wing of this stately home.
More info 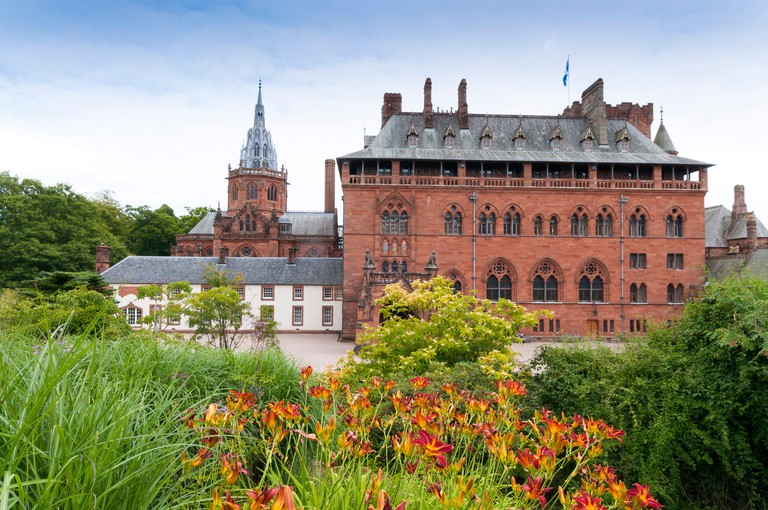 Mount Stuart, Isle of Bute | © allan wright / Alamy Stock Photo
A 19th-century neo-Gothic wonder designed for the 3rd Marquess of Bute, nothing can prepare the senses, the soul and the mind for the celestial beauty encapsulated within Mount Stuart House and its maze of mind-reeling gardens. Praised as one of the most tech-savvy houses back in its day, Mount Stuart is said to host the world’s first ever heated swimming pool. Between the chapel awash with Carrera marble and accompanying Sistine-Chapel-style floors, the series of star-clad ceilings punctuated with constellations decorating the sky like necklaces, and the 80ft-tall (24m) Marble Hall with its rare Italian and Sicilian marble and alabaster, it’s a sight for sore eyes. 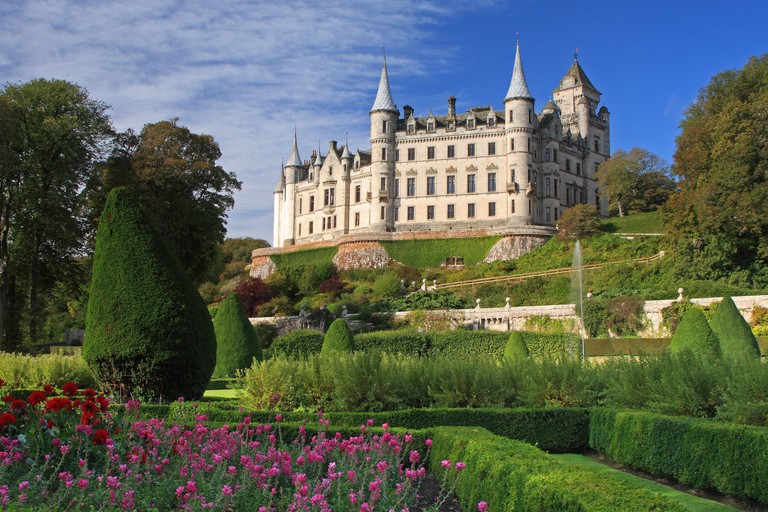 Mid morning sunshine in summer at Dunrobin Castle, Sutherland, Scotland | © Andrew Doggett / Alamy Stock Photo
Dunrobin Castle is something straight out of a fairytale with its white silvery tones and towering turrets. Taking the crown as one of the oldest continually inhabited houses in the UK dating back to the 1300s, Dunrobin is the family seat of the Earl of Sutherland and the Clan Sutherland. This beauty, which mimics a French château, is also the largest stately home in the Northern Highlands with its impressive 189 rooms. It served as a naval hospital during World War I. 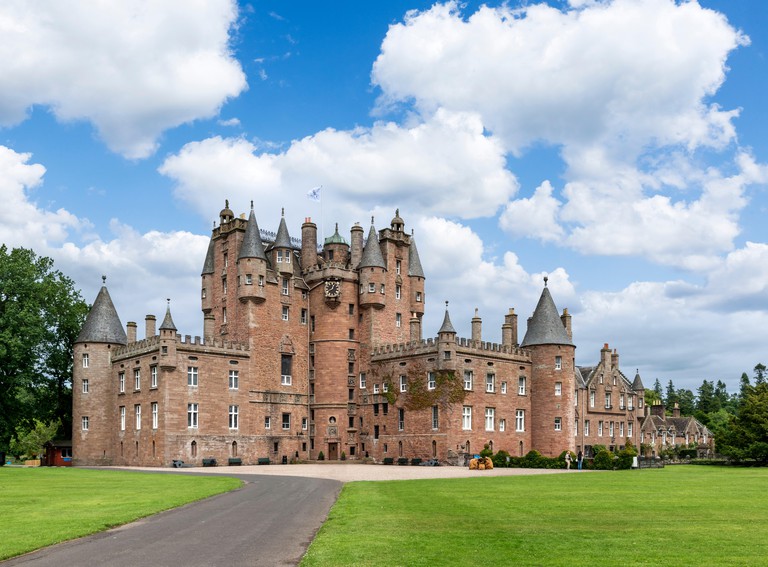 Glamis Castle, family home of of Elizabeth Bowes-Lyon (Queen Elizabeth the Queen Mother), Angus, Scotland, UK | © Ian Dagnall / Alamy Stock Photo
A structure bejeweled with Scottish heritage, Glamis Castle has a history as gripping as its architectural appeal. This royal abode served as the deeply cherished childhood home of the Queen Mother, the famous setting for Shakespeare’s Macbeth, the birthplace of Princess Margaret and home to the Earls of Strathmore and Kinghorne, to name just a few of its grand titles. Glamis is also shrouded in folklore and legend, with rumours stating that there is a hidden room where a man of high standing played cards with the Devil. Speculations aside, Glamis rests in a league of its own. 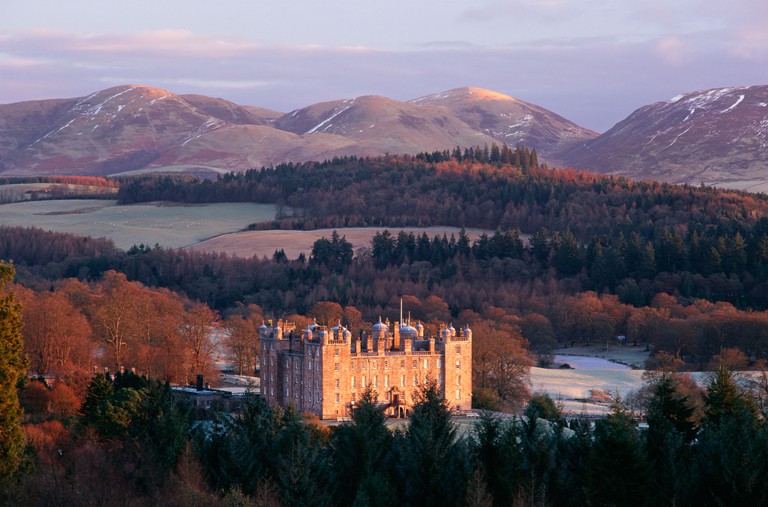 Sunrise winter snow on the Lowther Hills behind Drumlanrig Castle in scenic landscape of the Nith Valley, Nithsdale, Scotland UK | © South West Images Scotland / Alamy Stock Photo
Set amidst its striking 90,000-acre estate, Drumlanrig Castle is a brooding structure graced with fine symmetry and a captivating presence. As the Dumfriesshire seat of the Duke and Duchess of Buccleuch and Queensberry, this bonnie castle is applauded as one of Scotland’s greatest examples of 17th-century Renaissance architecture. Affectionately referred to as the ‘Pink Palace’, thanks to its meticulously cut red sandstone, Drumlanrig boasts 17 turrets, 4 towers and 120 rooms and was used as a set in Outlander. 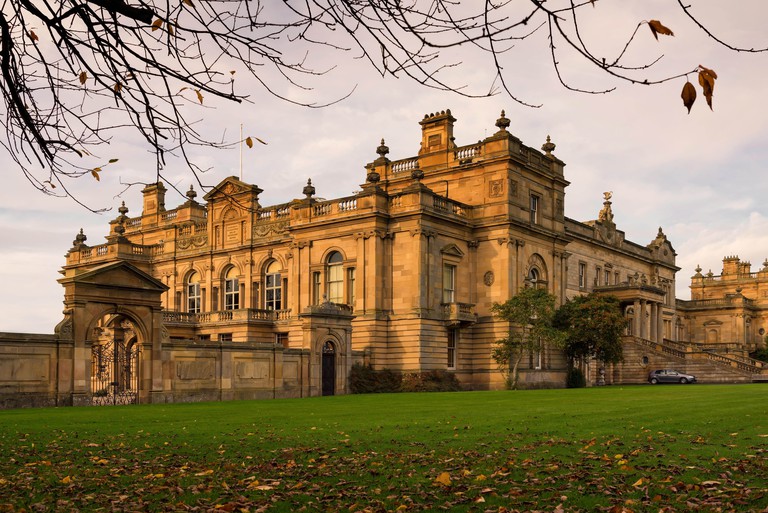 Gosford House and estate gardens, near Longniddry, East Lothian, Scotland | © Bill Miller / Alamy Stock Photo
A pocket of respite and beautiful scenery, Gosford House is tucked away along the East Lothian coast. As the seat of the Earls of Wemyss and March, the house basks in the splendour of the 5,000 acres of combined coast and parkland, which includes an exquisite old stone-adorned curling house, striking mausoleum and an Eden-like pond punctuated with an ocean of lily pads. The house, a neo-classical work of art and one of the last celebrated commissions of revered Scots architect Robert Adam, was finished in 1808 for the seventh Earl of Wemyss.
Give us feedback