The Best Bars To Wet Your Whistle In Aberdeen

It’s famous for its granite architecture, proximity to the North Sea oil fields and being steamrolled over by Donald Trump to make way for another one of his golf-courses, but where do the good folk of Aberdeen go for a wee dram? Here is our definitive guide to the best bars in Aberdeen. 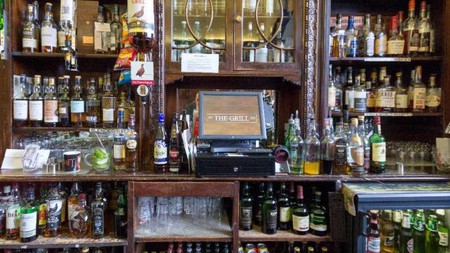 Pub, Pub Grub, $$$
Facebook
Email
Twitter
Pinterest
Copy link
Share
The Grill is one of Aberdeen’s oldest and most famous pubs, having originally opened in 1870 and remaining virtually unchanged since 1926. As such, the unique mahogany veneer panelling and oxidised-bronze frontage befitting The Grill’s period have ensured that CAMRA placed it in their directory of Historic Pub interiors. The pub is synonymous with quality dram; not content with a decent range of cask ales and draught and bottled lagers, The Grill takes pride in its 600 malt whiskies lining the gantry, including Scottish and global offerings. Whisky ‘flights’ are available to the hesitant drinker wherein four whiskies are lined up by distillery, age and region to offer a wide range of flavours to compare and contrast. The pub also serves as an ideal pit-stop location on the way to a gig at the adjacent Aberdeen Musical Hall.

Watch out for: The historic pub interior

Watch out for: The ‘Dufftown Boilermaker’

The founding member (and now flagship bar) of the Brewdog craft beer pub empire, Brewdog Aberdeen still remains one of the Granite City’s finest watering holes, in spite of moves to commercialise the brand with t-shirts and placards decorating the pub. In 2010, the former Marischal pub was thoroughly sledgehammered and given a fresh lick of paint to make way for this pioneering on-premise brewery, which still features a healthy selection of its own draught beers on tap, not to mention a rotation of one hundred or so Brewdog favourites and guest beers from the likes of European and international brewers such as Mikkeller, Stone, Nonge O and Three Floyds.

Watch out for: A UK craft beer pioneer

Bos’n is variously a tapas bar, social club and dive bar with an overall Latin-American theme. The concept adheres to the popular bar decor style of upcycled and repurposed furniture, with its palette boards and coffee sacks lining the floors, but manages to steer clear of pretentiousness with playful touches such as mini umbrellas in the cocktails. Those cocktails are indeed the real stars of the show, reflecting the bar’s love of sugarcane and agave-based spirits, Red Stripe lager and slushy drinks. Try out the ‘Bos’n Michelada’ (Arette Blanco Tequila, tomato juice and a house blend of mixed spices topped up with beer) and the classic Mai Tai. The Latin American tapas plates include lamb quesadillas, pressed pork cheek and mango, and Shetland blue mussel, fiesta veg and wasabi mayo. Bos’n is situated within The Aberdeen Academy, an upscale retail mall in a converted school replete with designer brand stores and additional fine dining, so Bos’n patrons can satisfy their retail therapy cravings after drinks, or alternately refuel after a shopping session.

Watch out for: The Bos’n Michelada