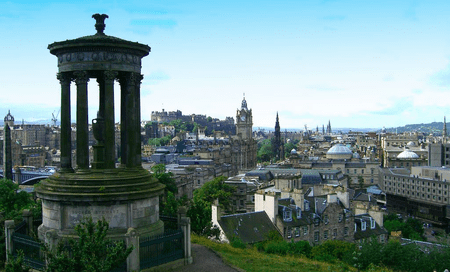 From the winding cobblestone streets to the breathtaking views at the top of Arthur’s Seat, it’s unsurprising why Edinburgh has inspired countless novels, both classic and contemporary. Among the many writers who call the Scottish capital home are Kate Atkinson, Ian Rankin, and J.K. Rowling. The Culture Trip explores six literary journeys set in or inspired by Edinburgh’s unique atmosphere and impressive history.

This classic novel tells the story of the ‘Brodie Set,’ six primary school-aged girls who are singled out by their teacher, Miss Jean Brodie, to receive an education far more worldly and controversial than that of the average young girls living in 1930s Edinburgh. The novel isn’t long but covers nearly a decade in the lives of the ‘Brodie Set’ under the tutelage of the eccentric and remarkable Miss Brodie, who attempts to navigate them through the world of adolescence with anecdotes and tales from her own education, love life and personal political views. It is a moving coming-of-age portrait, a 20th-century period piece and a classic British school story.

Set in present-day Edinburgh, Johnstone’s thriller tells the story of a young mother’s disappearance and the husband and son she leaves behind. Readers can immerse themselves in the gripping world of Johnstone’s book by taking a trip out to Portobello Beach, where Mark and his son, Nathan, struggle to cope with Lauren’s absence. Johnstone seamlessly blends the mystery behind Lauren with an engaging family drama that reveals the secrets behind the Douglas’ marriage, at a swift speed up until the finale. Gone Again is contemporary fiction that makes use of Edinburgh’s unique mood in a subtle and effective way.

Smith’s novel is set on the train from King’s Cross to Edinburgh, following the stories of four strangers who have nothing in common, except that they have been in love at one point in their lives. This engaging and often funny contemporary novel capitalises on the scenic train journey that passengers take as they leave London for Edinburgh to tell a light-hearted tale in a unique and visualised style. Smith’s novel is enough to inspire readers to follow the characters of his novel on their own train journey, from the stunning sights of the countryside to the majestic sight of Waverley Train Station.

Ian Rankin is a Scottish writer whose name has become nearly synonymous with that of Edinburgh, due to his prolific Inspector Rebus series, which follows the titular character in his investigations into murders, organised crime, and corruption in Edinburgh. Although Rankin’s novels paint a rather dark and unflinching portrait of the city, they take full advantage of Edinburgh’s gothic and moody architecture to create a very visceral world. They are beloved by readers for their carefully constructed and creative plots and attention to characters and detail. Readers can visit many of the pubs and locations described in the novels, such as the Oxford Bar.

Maggie O’Farrell is a Northern Irish writer now based in Edinburgh, where her novels are often set. The Vanishing Act of Esme Lennox is a story of family secrets and betrayal, spanning several decades. Its gripping narration and attention to character development are what make the novel a standout. Readers can learn the history of the Lennox family as they uncover the city of Edinburgh as it changes over the course of many years.

This classic and Gothic tale was undoubtedly partially the inspiration behind another Edinburgh-set novel, The Private Memoirs and Confessions of a Justified Sinner by James Hogg. While that novel deals with the social and religious politics of 17th-century Edinburgh, Stevenson’s novel uses Edinburgh as the dark and moody backdrop for his classic novel about Dr. Jekyll’s struggle with his dual personalities. Dr. Jekyll and Mr. Hyde is a classic tale for readers, both familiar with or new to Edinburgh.