The 12 Most Impressive Buildings in Aberdeen 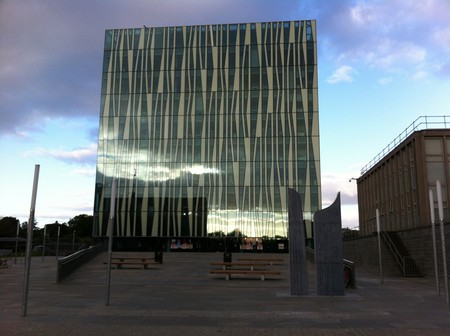 Another name for Aberdeen is ‘The Granite City’, and the extensive use of this hard, sparkling rock ties the city together in much the same way that Paris is a whole through the use of its local limestone and sandstones. Unlike the celebrated beauty of Paris the buildings in Aberdeen constantly surprise visitors, who often have no idea they are coming to a place where architectural wonders overflow. From ancient places of worship to ultra-modern, award-winning towers, and a grand twin-domed theatre to university buildings that would be at home in Oxford or Cambridge, here’s our guide to the best twelve buildings to see in Aberdeen, with a few bonus locations thrown in too! 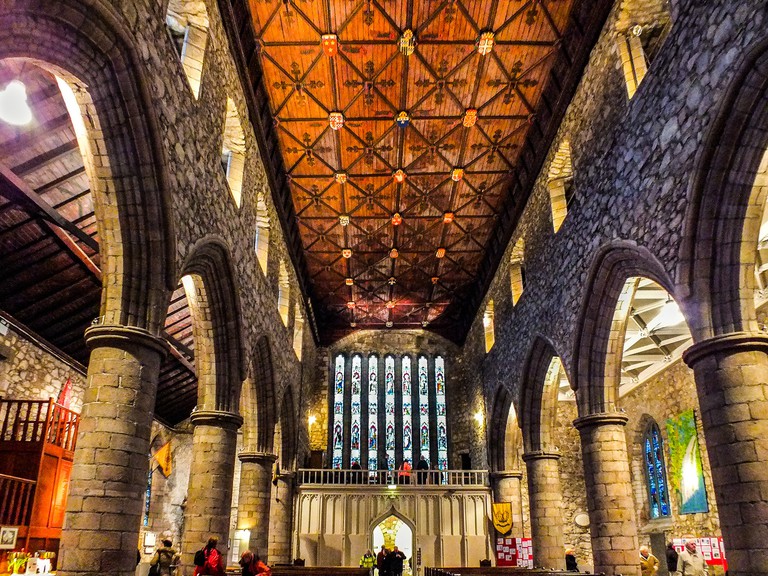 St. Machar's Interior | © Keith Laverack/Flickr
There has been a church on the site of St. Machar’s Cathedral since the sixth century, when St. Machar, a follower of St. Columba started preaching at the spot. The present building mostly dates from the medieval period, with the oldest parts dating from the 12th century. A peek inside is rewarded with the stunning interior, especially the beautiful wooden heraldic ceiling. 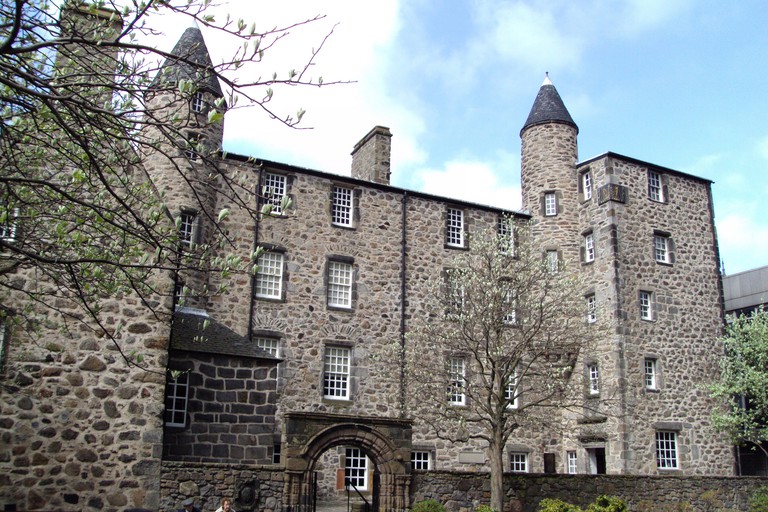 Provost Skene's House | © Denisbin/Flickr
The oldest private house in Aberdeen, with parts dating from 1545. The building is named after Provost George Skene, who bought it in 1669; a provost is similar to a mayor, and the title has been in use in Aberdeen since the 13th century. The house is tall, with the small windows that typified the period. Make sure you spot the gargoyle on the corner.

Although the title only mentions His Majesty’s Theatre, this is a row of three buildings that beautifully complement one another. From the theatre, with its twin domes and Frank Matcham design; to St. Mark’s church, its dome modelled on St. Paul’s Cathedral in Londo; and then to the Central Library, opened in 1892, these three buildings are a must-see. Across the road is Union Terrace and its lovely gardens, and a series of statues in the vicinity. 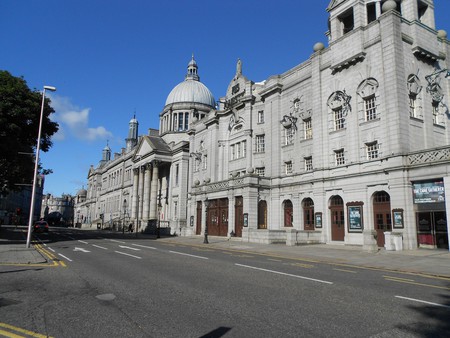 Old Aberdeen has a remarkably different character to the current city centre — which is not surprising as until 1891 it was a separate Royal Burgh. The area positively overflows with fascinating things to see, and a range of remarkable buildings. The Town House was built in 1789 and is such an architectural masterpiece that it actually features on the logo of The Architectural Heritage Society of Scotland. 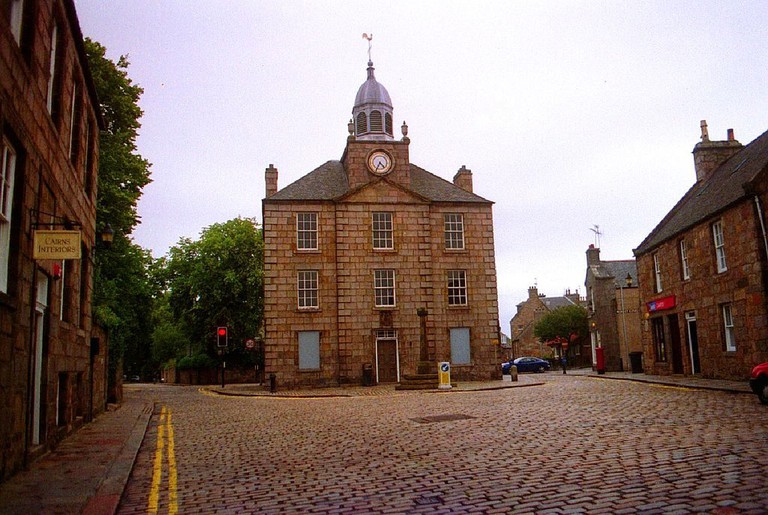 Cathedral
Facebook
Email
Twitter
Pinterest
Copy link
Share
Map View
St. Andrew’s Cathedral is the seat of the Episcopalian Bishop of Aberdeen and Orkney. Designed by the renowned local architect Archibald Simpson, who designed much of the ‘Granite City’ you see today, the façade is of sandstone (much to Simpson’s annoyance, who did not want this cheaper stone!), with the rest constructed from granite. Although impressive from the outside, it is worth looking inside and, if you can, visiting when there is a performance by one of the many choirs or orchestras that sing and play here, as the acoustics are simply exquisite. 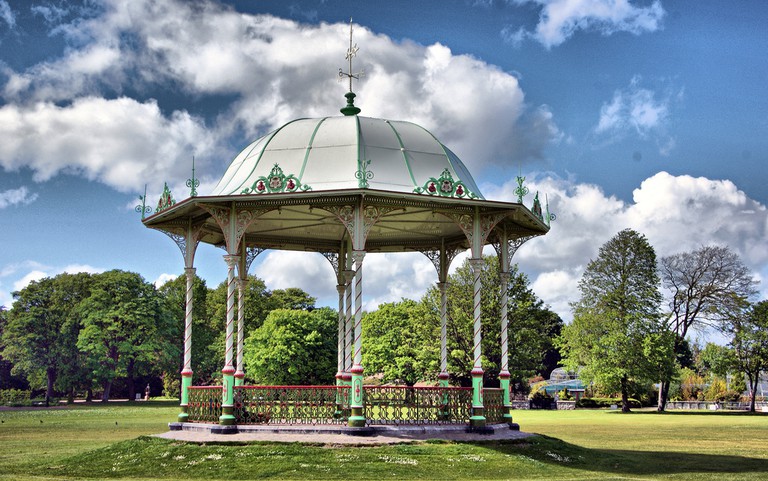 Duthie Park Bandstand | © Iain Middleton-Duff/Flickr
Something slightly different, a series of buildings made from steel and lots and lots of glass! These indoor gardens in Duthie Park are among the largest in Europe and, while the plants they house are undoubtedly the star attraction, it is definitely worth taking some time to study the splendid architecture. The gardens themselves include a ‘corridor of perfumes’, Tropical House, Arid House, and a Japanese Garden, among others. 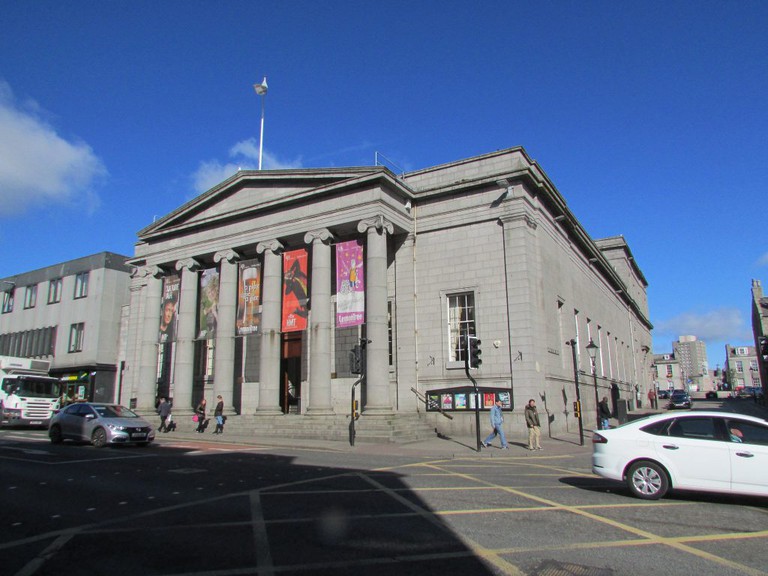 Music Hall, Aberdeen | © Tom Bastin/Flickr
Another of Archibald Simpson’s designs, and opened in 1822 as the County Assembly Rooms, the venue was altered and added to in 1859 and reopened as a music hall. Currently undergoing a multi-million pound renovation, this will ensure that this remarkable building lasts for many years yet. Charles Dickens, Paul Robeson and Emile Sandé have all performed here. The stone the building is crafted from may look familiar to those who know London, as it is an Aberdeenshire granite also used in Trafalgar Square and the Thames Embankment.

The Kirk of St. Nicholas Uniting 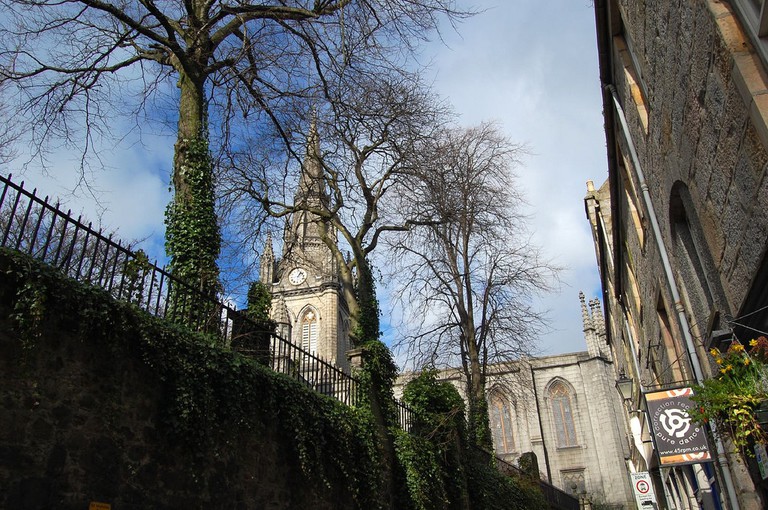 The Kirk of St. Nicholas Uniting, Seen From Correction Wynd | © _aik/Flickr
A church has stood on this site since at least the 12th century and, as with many of the church buildings in the UK, St. Nicholas has portions from many different eras, including parts of the 12th century church, and 18th and 19th century rebuilding. As well as the impressive architecture itself, the church has many medieval effigies and late medieval woodwork. To Aberdonians, this church is known as the ‘Mither Kirk’ (Mother Church). 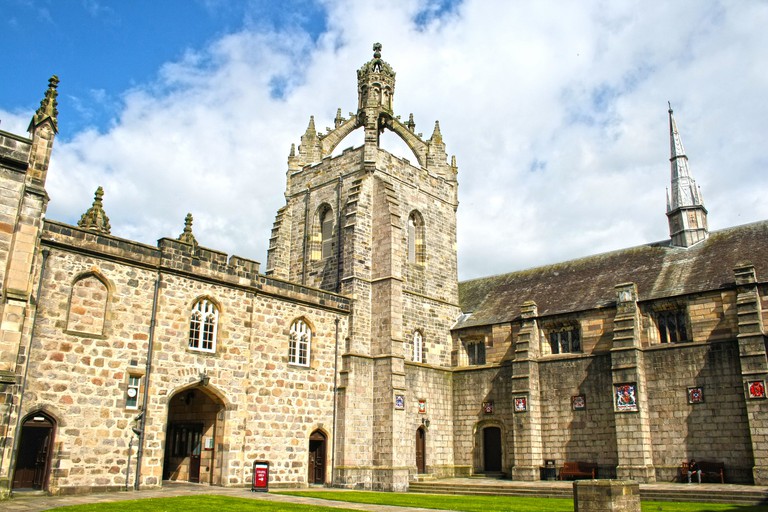 King's College, Old Aberdeen | © Verino77/Flickr
An absolute must-see, this late 15th century building features an iconic crown tower and the most complete medieval church interior in Scotland. The chapel is the centrepiece of the university, but there are many other fine university buildings on the site, including Elphinstone Hall and the Quadrangle. A visit to Old Aberdeen is not complete without looking at these buildings. 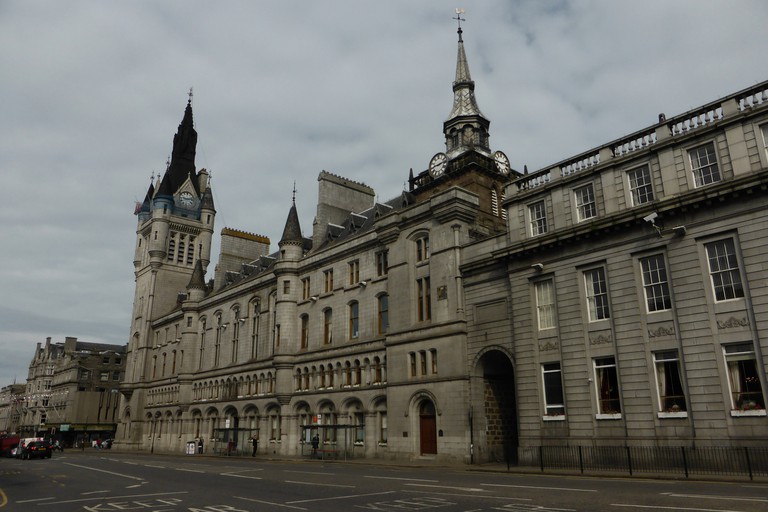 New Town House | © John Lord/Flickr
As with His Majesty’s Theatre, this is actually three interesting buildings all next to one another. Situated close to the end of Union Street, Aberdeen Town House was designed in a Flemish-Gothic style in order to acknowledge the long history of trade between the city and the Lowlands of Europe. A stunning building, it is made even more fascinating by being attached to the 17th century gaol, Aberdeen’s Tolbooth. This is now a museum, which is well worth a visit. The final building of the three was originally a bank, but is now a pub named after the original architect and no prizes for guessing this is Archibald Simpson! The building has four sturdy columns, a grand entrance, and a famous statue of Ceres on the roof.

From Aberdeen’s famous granite splendour to something utterly modern. Opened by the Queen in 2012, Aberdeen University’s new library can be seen from much of the city. An award-winning design, the cube shape is clad in glass with wavy vertical stripes, is eight storeys tall, and features a double-height ground floor. Inside is just as fascinating as out, with curving floors around a central atrium; a much more fluid interior, which acts as a foil to the straighter geometry of the outer. 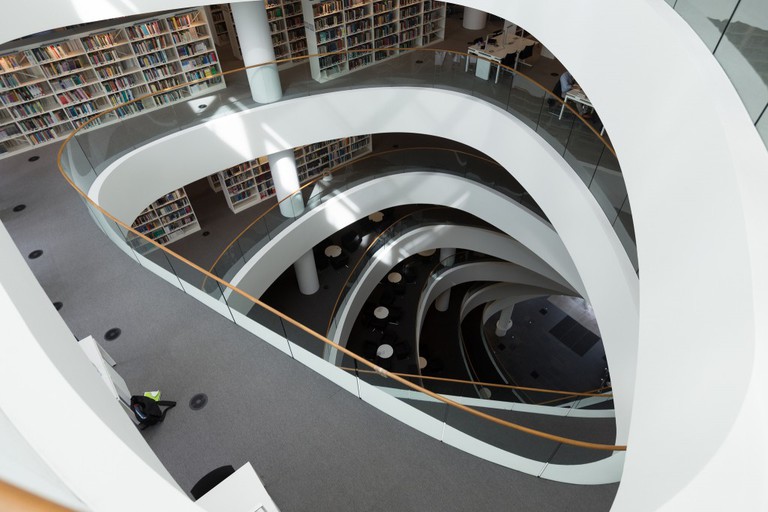 Featuring several different architectural styles, different forms of granite, and a sense of awe and majesty, the late 19th century Marischal College buildings are often regarded as the finest example of Aberdeen’s granite masterpieces. The second largest granite building in the world, it is still owned by the University of Aberdeen, which formed from the union of Marischal College and King’s College in 1860, although it is now leased to Aberdeen Council. To make it even more spectacular, it was recently refurbished and renovated, including cleaning off a century of grime and making it shine once more. 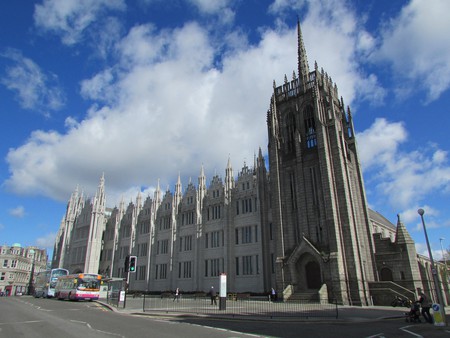