Leith’s Rebel Spirit: A Community Made For and By the People 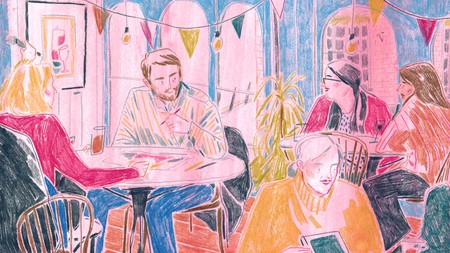 Edinburgh’s northernmost district, Leith, has an energy, attitude and identity all its own. Culture Trip meets four local Leithers fighting to protect grassroots activism and the arts in their community. 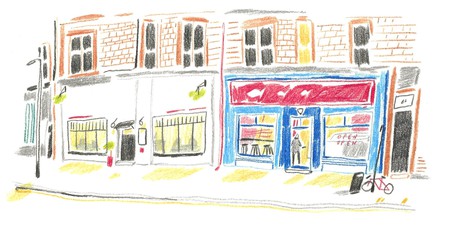 “Leith has had a very negative reputation,” Morvern Cunningham says bluntly. The straight-talking director of arts initiative LeithLate moved to the district 10 years ago and stayed for its gruff but neighbourly spirit. “That Trainspotting association was too close for comfort in a lot of ways. People almost didn’t believe me when I was telling them about all the artistic activity going on here.”

If Edinburgh is full of romance – postcard-perfect cobbled streets, gnarly gargoyles and a dramatic skyline dominated by Castle Rock – then Leith is filled with romantic thinkers. This historic port town is a place of poets and painters, makers and musicians, novelists and truth-tellers. A fierce sense of individual identity sets it apart from (and occasionally in opposition to) the broader city of Edinburgh, which officially absorbed Leith within its council boundaries in 1920, even though Leithers largely voted against it.

Almost a century later, Leith remains a unique town, defined by a determined sense of community and a shared history of rebellion. Despite threats from developers and encroaching corporations, Leithers are pulling together to create energetic, accessible spaces made by and for the people – and for anyone else who wants to wander north from Waverley station to take a look.

That Trainspotting association, as Cunningham puts it, has stuck to Leith like a shadow. Of all its contributions to popular culture, from Pop Art innovator Eduardo Paolozzi to prize-winning punk hip-hop trio Young Fathers, Leith is still best known as the backdrop to Renton, Begbie and co.’s grimy exploits in Irvine Welsh’s 1990s novels.

Welsh quickly became the most famous chronicler of Leith’s economic and social changes, from the ’80s to the present, and his success supercharged the profile of other local, countercultural publications, such as the well-titled Rebel Inc. Bearing the slogan “Fuck the mainstream!”, the journal once printed an infamous ‘Ecstasy Interview’ between Welsh and founder-editor Kevin Williamson. Still, Trainspotting’s Leith is one of drug abuse, dodgy drinking holes and the impact of deindustrialisation, and that’s a reputation its community is keen to shrug off. 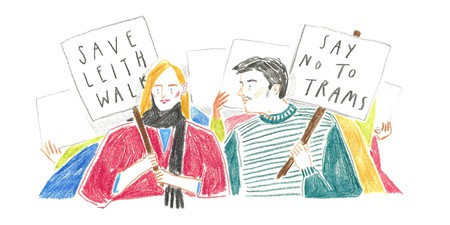 Art beyond the institutions

Cunningham started LeithLate almost 10 years ago, as a way of celebrating Leith’s grassroots arts and artists. The event takes place in an assortment of unexpected venues (old wine cellars, revamped storefronts), and usually all on one night. It’s a bit like a bar crawl, but with added breakdancing or panel discussions. Other projects have teamed visual artists with local business owners to make murals on the stores’ shutters so that Leith remains a canvas for creatives even after hours.

“It’s really important to me to take art out of revered places like galleries or theatres,” says Cunningham. “Leith has this distinct energy and attitude – it’s been really badly done to, but if no-one cares about a space, then a space can self-organise.”

Cunningham’s specifically referring to the Great Tram Debacle, an enormously costly error for both the council and local businesses, some 10 years ago. Leith Walk (the artery road that runs north from Edinburgh’s city centre and towards Leith’s shore) was dug up and fundamentally disrupted, only for the tram project to run out of funding before it ever made it to Leith. The diversions and decreased footfall caused layoffs and closed stores – all for nothing. The project is currently underway again, with some trepidation among residents.

The trams are just one marker on a long timeline of Leith feeling deserted by Edinburgh, in a manner that The Guardian has described as “stalled regeneration”. Once Scotland’s greatest trading port, Leith was hit hard by the Great Depression and later shouldered the loss of thousands of jobs at the docks in the ’80s. It contains some of Scotland’s most deprived and densely populated areas, and yet the sleek new developments that frame Leith’s shore are some of the priciest in Edinburgh. A critical shortage of affordable housing means that a reported 30-34 percent of children in Leith are living below the poverty line, and rents in the capital are still rising. There’s a concern, too, that if the tramline does eventually make it north, it could push prices up even higher.

Cunningham established LeithLate in opposition to the Edinburgh Art Festival, which typically focusses on prestigious institutions in the city centre. It wasn’t that she wanted to prove Leith’s venues as an equal but rather an alternative in both aesthetics and attitude. “Our thing is, if we support cool people to do cool things, then everyone can enjoy themselves,” she says.

A similar mantra underpins Out of the Blue – a social enterprise “before social enterprises were a thing”, according to manager Rob Hoon. Since 2001, it’s been based in an old drill hall, and just celebrated its 25th anniversary with a grand exhibition of over 40 associated artists. The storied, listed building has been lovingly renovated (the high ceilings let in the light even on Edinburgh’s dreich days), and its protected status made it a cheap buy for the Out of the Blue team as developers couldn’t pull it down for profit. Inside, the café and print studio both provide work experience and training opportunities for local young people, and a host of creatives are holed up in the rented studios that radiate from the main hall. Out of the Blue runs a series of other shared spaces throughout the city, including the Bongo nightclub and a recording studio that’s home to Young Fathers.

“At the start, it was quite anarchic! But to my mind, what we do is culture in its widest sense,” says Hoon. “It’s about making sure that the organisation is sustainable, and then recognising the social values – education, employment, health benefits. It’s about how we live our lives, and not seeing art as something separate.”

Edinburgh enjoys a formidable status as a tourist magnet and attracts close to 4 million visitors each year – a lot for a city of only 500,000 people. The Edinburgh Festival Fringe dominates the city centre each August, and its continued expansion is forcing discussions about the city’s support (and sometimes lack thereof) for local arts and art spaces. “Are we a city for tourists or a city for the people that live here? Obviously, you can be both, but I’m interested in what we’re doing all year round,” Hoon says.

Cunningham is tentative to mention the ‘G’ word (gentrification), joking, “What’s that saying – who are the gentrifiers? They’re the ones who got here five minutes after you.” But there’s no doubt that Leith is changing.

Over the past year, a block of buildings at the bottom of Leith Walk has been making headlines. Developers submitted plans to knock it down and replace it with a six-storey development that’s heavy on holiday and student housing and light on community spirit. In response, locals launched ‘Save Leith Walk’, a campaign that’s fighting to stop the demolition, support the tenants and to increase the amount of proper housing available. For Linda Somerville, a lifelong Leith resident and one of the campaign organisers, change is nothing to be feared – provided that it’s driven by the community rather than the profit margins of developers. She describes the campaigners as a mix of “Old Leith – like me”, and ‘New Leith’, in itself a symbol for the town’s proudly open doors.

“Here we’ve got a chippy next door to a Michelin restaurant – Leith’s been through lots of changes in the past. What we’re saying is, we live here, and we work here. Rather than being victims to some corporate, we’re empowered,” says Somerville. 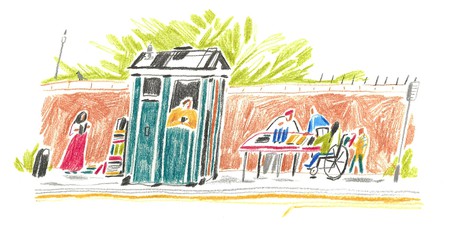 Leith Walk Café recently closed its doors after 60 years of trading, and now there’s only one business left on the once-busy block – the Depot, a pub and venue that’s key to the city’s DIY music scene. It’s due to shut in January 2020, as the developers are also the landlords. “It’s turned into forced evictions,” says Somerville. “It should be a thriving business centre, and instead, it’s going to be a derelict building.” The campaigners are still waiting on a final verdict on the developers’ appeal, but have proactively launched a petition for residents within the postcode to support a ‘Community Buy-Out’ and bring the block under community ownership. “We’ve tapped into this strength of feeling, the pride that people have about the place,” she enthuses. “It’s the community coming together to say, ‘I want to get involved because I’m committed to the people I live and work beside.’ That has to give us some optimism!”

A recent success story, driven by exactly this community spirit, is Typewronger Books. Tom Hodges first started selling books out of Leith Walk Police Box, a literal TARDIS that provides dried fruits or a tool-lending library, depending on when you walk past it. He set up with a gazebo, a carpet, some shelving and a kettle to offer visitors as comfy a browse as possible. “People would deliberately come and order from me because people here are so supportive,” he beams.

Eight months later, specialist booksellers McNaughtan’s offered him its studio space, and Typewronger became a brick-and-mortar establishment. As well as fixing typewriters, Hodges specialises in poetry and small presses, including locally made mags like Marbles and Counterpoint, printed just down the road at Out of the Blue. “Our stock is idiosyncratic,” he says proudly. “It’s based on whatever the hell I fancy.”

Typewronger is used for poetry readings, gigs and book clubs (if you have a good idea, he wants to hear it), and such is the community that’s built up around it that some customers drop off their plants when they go on holiday. Given that the shop is a matter of metres too far south to fall within Leith’s boundaries proper, its inclusion in this article could prove controversial. Still, as Cunningham says, “There’s always a pedant, but Leith is a state of mind.”

Cunningham’s half-joking, but Somerville takes this sentiment one step further. The campaigners are pushing a new initiative called #OurLeith, designed to promote a sense of local ownership over the area and to push for greater autonomy. “Let’s be ambitious,” she says. “Let’s think about what we want. It’s a hundred years [in 2020] since Edinburgh voted to have Leith under its control, so I think we should have another referendum. Everyone else is having two. Even if it’s just for fun.” She pauses. “Or not. Seriously… let’s try.”