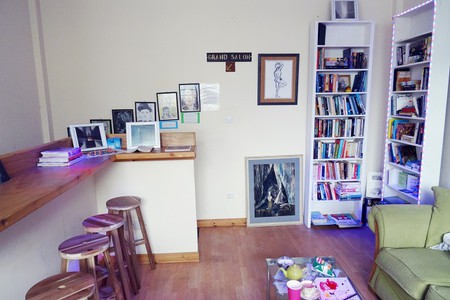 Sketchy Beats is a new arts café that has opened in the up-and-coming neighbourhood of Leith in Edinburgh. The café organises fun, creative events for the community, such as innovative life drawing classes, live music and DJ sessions, poetry slams, and arts workshops, all while serving affordable, healthy, and delicious food. We interviewed Cosima Canneti, the owner of this welcoming café, to learn more about this exciting initiative. 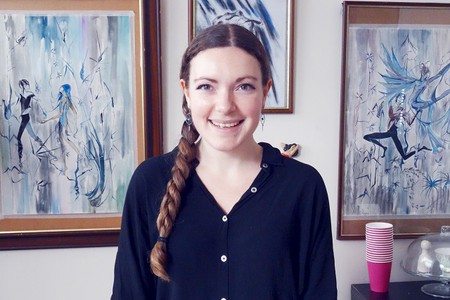 What inspired you to open the café?

I was working at a café and a lot of the people I met there were very creative in their spare time. Tim, for example, who was the manager, had all of these recordings of him singing on YouTube, and he would also draw some incredible pictures, but he would just do it at home on his own. I kept meeting more and more people in this job – which wasn’t a creative job – who were really creative, and I wanted to open a space where we could express this creativity. I started doing it as a session, once a month, at The Yellow Bench; at the beginning it was friends from work and uni friends, and then friends of friends would come and the events grew. Life drawing events with more than 40 people would turn into a party in the end, with Christian, who now volunteers at Sketchy Beats, DJing. Opening the café was an opportunity to have a creative space in which these events could happen more often.

How would you describe the atmosphere at Sketchy Beats?

There’s a homely atmosphere – people walk in here and say: ‘this looks like a flat!’. People can come and spend hours drawing, or just sit on the sofa all day with a guitar. It’s like a big communal living room, a space where people can hang out with their friends, and even talk to new people. There’s different levels which feel like different places, on the same night we can have drawing and music and dancing. Sometimes there’s people hanging out on the terrace area outside, the room downstairs has big speakers where we have the DJ, and then you come up the stairs and there’s chilled music.

Can you tell us a bit more about your unique take on life drawing?

I know this girl who is a very good dancer, and I had an idea to do life drawing sessions where she would be a dancing life model. The dancing sketches turn into a different type of drawing; it loosens up your hand, and people can express themselves through freer lines and movements in more dynamic drawings. In our life drawing sessions first we draw a live musician – this was inspired by my sister who is a singer – then we have the dancer, and then nude poses. The sessions are informal and people don’t feel pressure if they are not experienced.

Do you have an arts background yourself?

I went to quite an artsy school, specialised in performing arts – music, drama and dance – so I guess I was always surrounded by creative people. The school focused a lot on creativity. In my family as well, my grandma was a singer, my uncle’s a musician, my aunt’s a designer (she actually designed the logo for Sketchy Beats!) my sister’s a singer, and everyone in my family enjoys art, so I’ve grown up with a creative community around me. It’s what I love about Edinburgh as well, it’s creative in a really unpretentious way – people are just quietly creative in their free time. 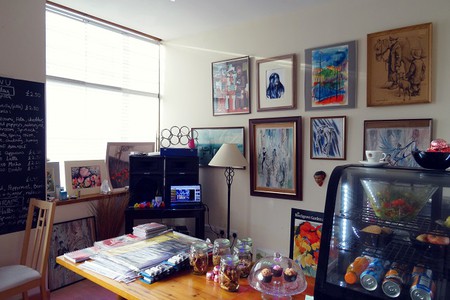 Why Edinburgh and why Leith? What’s special about them?

The people I guess. I grew up in London where people tend to put up a guard and aren’t open to each other, and there’s no sense of community. I would never see people sitting at different tables in a café and then start talking to each other, that doesn’t happen often. When I moved to Edinburgh I noticed how friendly people were and how people talk to each other, and Leith is even more extreme in that sense. I’m still amazed by that. Also because rents are a bit lower in Leith than in the centre, more and more artistically minded people are moving to Leith. So I thought there would be a lot of people in this neighbourhood who might appreciate an arts café.

How do you see yourself fitting in the local community?

I guess Leith’s not really about fitting in, it’s about the differences because it’s such a mixed community. What I’m trying to do with this café is have a space where everyone in the community can come and mix and join together through creativity. You’ll get people sitting at different tables and often they’ll start talking to each other, probably because of the living room feel. It’s also about getting people drawing who wouldn’t normally do it, and I hope that the lighting and the music relaxes people enough to be creative.

The music and the DJing here are really good, and you often have live music and even DJing during life drawing sessions. What role does music play in the café?

Music is an important part of my life, I don’t think I could work without music. Live music is a big part of it, from the beginning I knew I wanted the café to have that live music element. Christian’s a DJ and a producer, and he’s quite unusual because he can do music for a party but he can also play more psychedelic slow songs for the life drawing sessions. 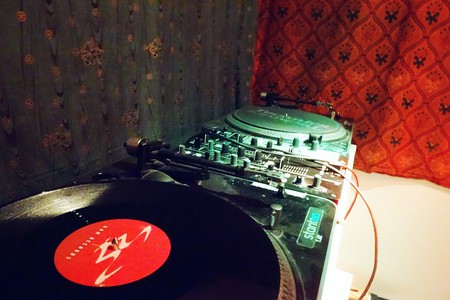 How do you see the future of the café” What do you hope it’ll become?

I want it to be an inbetween space, a middle ground between people being artistic in their own flat and performing in a pub. Here it’s not like an actual gig, it’s like playing in a living room but to a group of strangers. Even if people have no professional experience this place can give them experience and confidence. There’s quite a lot lined up, comedy, a poetry slam, more drawing and live music, guided meditation, a hip hop night… the more varied the better. I’m open to people coming to me with different ideas. I hope more and more people come to see it as their own creative space.