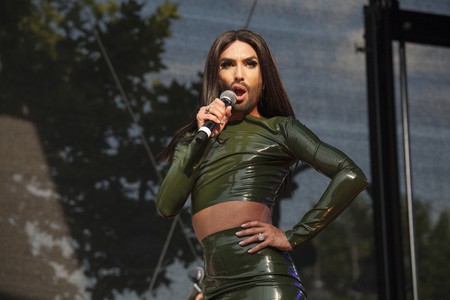 Eurovision Song Contest winner Conchita Wurst has cancelled an appearance at the Edinburgh International Festival after the musicians she was due to perform with were denied visas.

The bearded drag queen was due to perform on Friday night at the opening concert in the New European Song book series with Syrian ensemble Basalt, who are based in Vienna.

But the trio, made up of refugees, were unsuccessful with their visa applications even though they had a supporting statement from the festival.

Austrian singer Wurst, who won Eurovision in 2014 with ‘Rise Like a Phoenix’, decided to pull out of the concert in protest.

Almonther Alshoufi, a member of Basalt, told The Times: ‘We just kept asking “why?” How can this be allowed to happen? We were disappointed, saddened and totally heartbroken.’

A statement from the festival added: ‘We are very disappointed to announce that the Syrian artists were unsuccessful in their application for visas to perform live at the concert.

‘The concert will go ahead with a specially recorded introduction by Conchita and Basalt and a film of their performance.

Wurst, whose real name is Thomas Neuwirth, apologised to fans on Facebook.

The singer said: ‘Due to the unfortunate fact that my friends Amjad, Noor and Almonther from Basalt were unsuccessful in their visa application to enter the UK, I am not performing at the Edinburgh International Festival tonight.

‘We are all very sorry as we were looking forward to being there.’