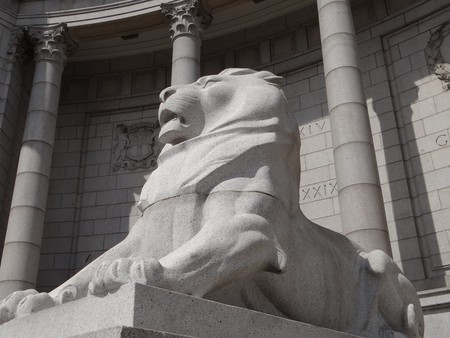 Everywhere you look in Aberdeen there is public art. Whether old or modern, the array of statues, carvings and sculptures are an integral part of the city and new art is added all the time. In this guide, we present a sample walking route through the city centre, via the Google Map below (the bracketed numbers correspond to this map), starting at the same place as our guide to the architecture of the city, pointing out some of the art along the way.

Wearing the robes of The Order of the Garter, carrying an orb and a sceptre and standing atop an incredibly detailed and complex plinth, this statue of Edward the 7th is perhaps Aberdeen’s most complicated granite carving. Designed by Alfred Drury, who is perhaps best known for his work on the entrance to the Victoria and Albert Museum in London, and carved by James Philip (who also worked on the war memorial described below), this statue is an excellent place to start our tour. You may notice that King Edward is often topped by one of Aberdeen’s ubiquitous herring gulls!

In this bronze statue Scotland’s bard, Robert Burns, holds a daisy in recognition of his poem ‘To a Mountain Daisy’. Cast in 1892, the bronze was crafted by the local sculptor Henry Bain-Smith.

"Come, Winter, with thine angry howl, And raging bend the naked tree; Thy gloom will soothe my cheerless soul, When Nature all is sad like me! " Robert Burns (and that's his statue)

Another bronze, this one seated, Albert the Prince Consort was first shown to the public in 1863, less than two years after his death. In the piece, Queen Victoria’s husband wears the robe of The Order of the Thistle. It was the grieving Victoria herself who unveiled Baron Carlo Marochetti’s piece.

Walking around the city with @lisasteiniger

Erected in 1888, this huge bronze standing proudly on a plinth of rough pink granite was sculpted by William Grant Stevenson. Situated opposite His Majesty’s Theatre and just across from Union Terrace Gardens, this statue is imposing and majestic in its own right, but the setting adds an extra element. An inscription reads, ‘I tell you a truth, liberty is the best of all things, my son, never live under any slavish bond.’ Sadly, however, there is no historical evidence of any connection between William Wallace and Aberdeen.

Carved in a beautifully silver granite, as mentioned earlier the principal mason was James Philip. Unveiled in 1925 by King George V, the lion was designed by local sculptor William Macmillan, who is also known for the design of the victory medal for The Great War.

Walk down Flourmill Lane and climb the ramp on to the upper storey of the Saint Nicholas Centre. Here you will find three works unveiled in 1985. The first, ‘Two’, is an abstract bronze relief, created by the Scottish artist Gavin Scobie. ‘Trumpet Leaf’ is carved from limestone and was designed and crafted by the celebrated contemporary artist Professor Paul Mason. Finally, the third of these pieces of public art is ‘Moon Table’, an abstract bronze presented on a granite plinth. The artist behind this work is Roland Piché.

Moved to its current home on the south-east corner of Provost Skene’s house in 1959, this gargoyle of a carving was a self-portrait created by George Russell and originally attached to a property he owned in order to torment a neighbour.

Unveiled in 2011, this bronze work stands 5.6 metres (18ft 4in) high and is the work of sculptor Alan Beattie Herriot. Unlike William Wallace, King Robert the Bruce does have a considerable connection to the city of Aberdeen, giving six different charters to the city over his lifetime. The statue depicts The Bruce with the charter he gave allowing the Royal Burgh of Aberdeen rights over a nearby forest over 700 years ago — the original of which is still in the possession of the city.

Standing on top of the Castlegate Well is a lead figurine known locally as ‘The Mannie.’ He was added to the well in the 18th century after 1710, but no one is exactly sure when. Originally it had been planned to include a wooden carving, but this was never completed. From 1852 to 1973 the well and The Mannie were moved to The Green, before being returned to Castle Street. 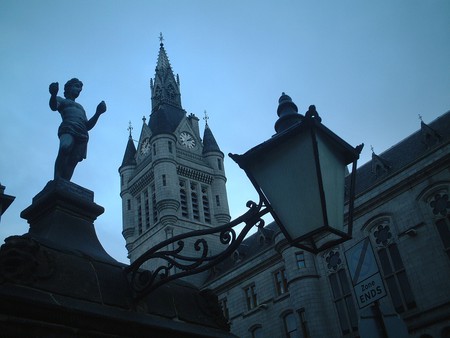 Unveiled in 2011 by Prince Charles, The Duke of Rothesay, this commission was completed by Mark Richards and represents the history of this famous locally-raised regiment. It features a quote from Winston Churchill, who called the Gordon Highlanders the finest regiment in the world and shows a soldier from the earlier days of the regiment, which was founded in 1794 and another from more recent years, just before it was amalgamated into the regiment now called The Highlanders. Prince Charles was the last Colonel-in-Chief before the amalgamation.

A Mercat Cross is a market cross, where fairs are held, punishments carried out and other civic duties are completed. The Aberdeen Mercat Cross was made by John Montgomery in 1686 and features intricate carvings of heraldry, coats of arms and other details. In the centre is a shaft topped by a white unicorn with a golden horn — Scotland’s national animal.

As well as regular new commissions and instillations, Aberdeen also embraces new ways to look at old art, eye-catching methods to ensure people re-engage with a statue they may have walked past many hundreds of times. The best example of this is the enjoyable and engaging Look Again Festival, whose aim of enabling people to ‘become a tourist in your own city’ is a great way to look at the familiar with fresh eyes. Here’s a slightly different view of Robert Burns.

If you look at our walking tour of architectural Aberdeen, you will notice that this walk follows broadly similar roads and streets. For this reason it is possible to combine the two or, since both are short, perhaps do one, then turn around and retrace your steps to do the other. This second option will also mean you can view the buildings in the architectural guide from the opposite angle, lending fresh perspective.