9 Stunning Pitstops Along the Aberdeenshire Coast

9 Stunning Pitstops Along the Aberdeenshire Coast

Puffin | © Harald Deischinger/Flickr
Aberdeenshire has 165 miles of coastline to explore; a coastline that has been rated one of the most scenic in the world. One of the reasons for this is due to its varying nature — long and empty sandy beaches here, hidden sheltered coves there, with towering cliffs filled with seabirds and topped with ancient castles. Here is our guide to nine of the most marvellous spots to visit along the Aberdeenshire coast.

Designed by William Adnan and built for William Duff of Braco, Duff House is a simply magnificent example of a Georgian house. Constructed between 1735 and 1740, the mansion is full of art, both in the stone carvings on the outside and also within, as it has been a part of the National Galleries of Scotland since 1995 — exhibiting art on a revolving basis. The rooms are beautifully furnished and, as the building is owned by Historic Environment Scotland, it is open to the public. As well as the interior, the outside has lovely walks along the River Deveron, and through the grounds and woods surrounding the house. It has been said that Duff House is one of the finest examples of Georgian architecture in the world.

Museum
Museum of Scottish Lighthouses
In 1787, the 16th-century Kinnaird Castle was converted into the very first lighthouse in Scotland, which is now incorporated into the Museum of Scottish Lighthouses. With a purpose-built museum beside the castle, and a wealth of exhibits, the visitor can also tour the castle and lighthouse. If you have ever wondered how lighthouses were built on tiny rocks in the middle of the sea, then you can find the answer here. The museum is open all year, with reduced winter hours.
More Info
Open In Google Maps
Stevenson Road, Fraserburgh, Scotland, AB43 9DU, United Kingdom
+441346511022
View menu
Visit website
Visit Facebook page
Send an Email
Give us feedback

Stonehaven is an ideally located small town if you want to explore the coast south of Aberdeen, with Dunnottar Castle a short distance away and the nature reserve at Fowlsheugh a few miles further south. Hosting Highland Games in July, two harbour festivals and a folk festival, Stonehaven is also inundated with visitors at Hogmanay, due to their fireball ceremony. This is when people parade through the town as the year turns, swinging blazing balls of fire in order to burn off the bad spirits from the departing year. It is quite a sight to behold and often features on Scottish Hogmanay coverage. 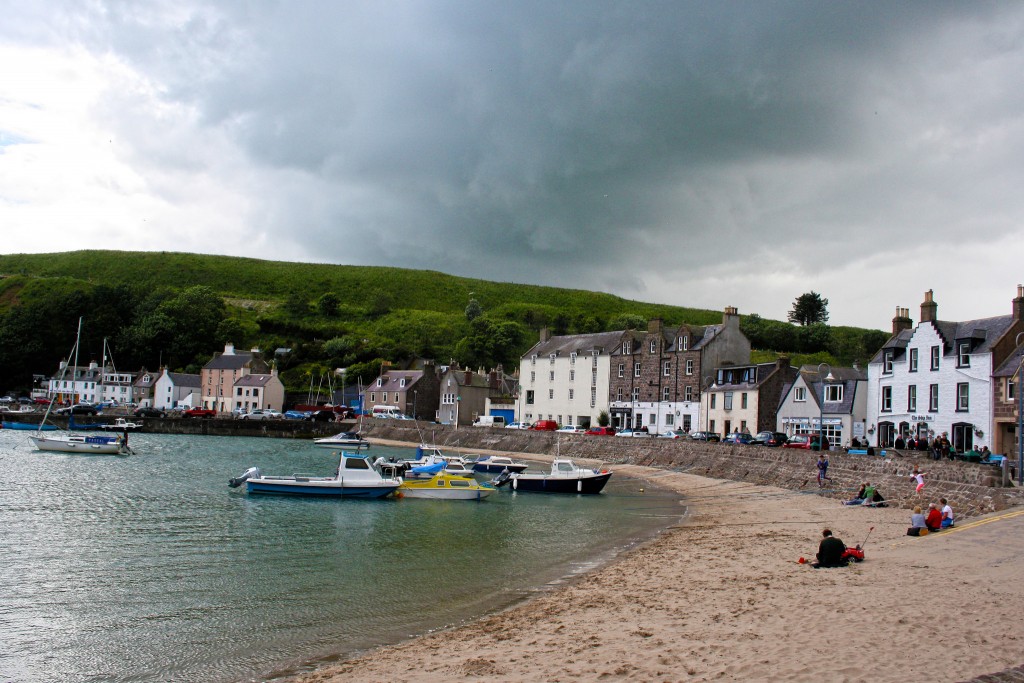 Originally built in the 16th century, and extensively added to over the years, New Slains Castle now stands as a ruin, after the roof was removed in 1925 in a tax avoidance scheme. There have been plans to renovate the building and turn it into accommodation in recent years, but at present it is open to the elements. Bram Stoker, author of Dracula, stayed nearby at Cruden Bay and it has been suggested that the castle, perched on top of cliffs, with thundering waves beneath and a deep ravine to protect it on one side, may have been the inspiration for the vampire’s castle home. Old Slains Castle, a short distance away is, as the name suggests, older, being built in the 13th century, until it was blown up after a rebellion. 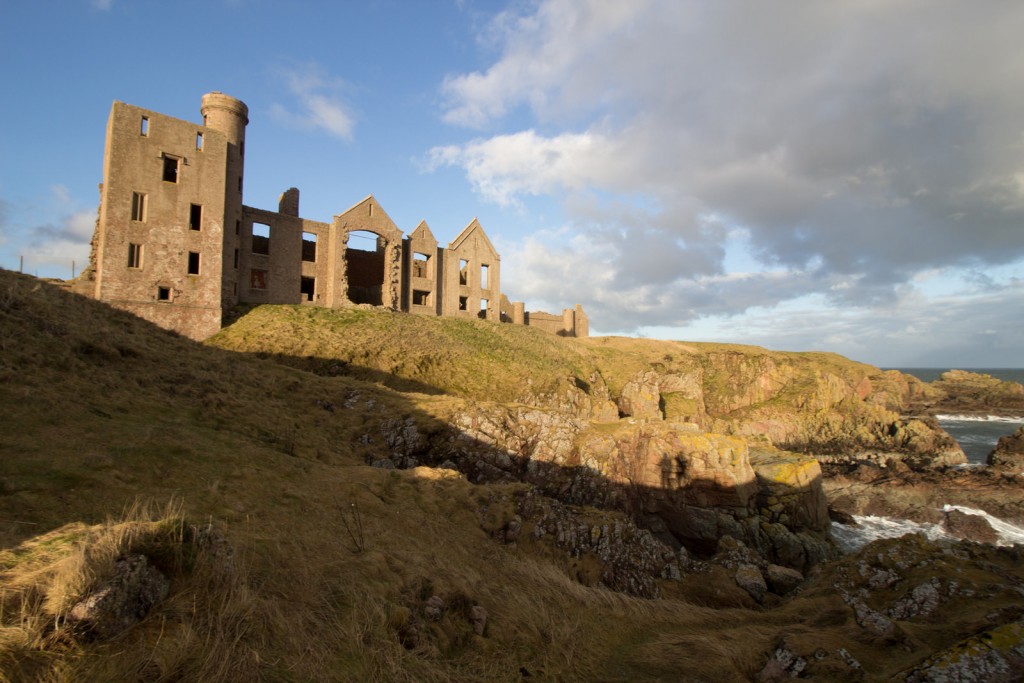 An artillery battery may not sound much like a must-visit, but Torry Battery is worth it. Originally the site dates back to the 1490s, designed as the city’s armoury, it was also the spot where pirates were executed. In 1859, construction began on Torry Battery, and it was fitted with an array of large guns. Now the area is used as an important migratory and nesting stop for birds. However, one of the best features of the spot is that this is the best place in Aberdeen to see the ships coming in and out of the harbour and, especially, playful pods of dolphins. On occasion there are even sightings of passing whales. 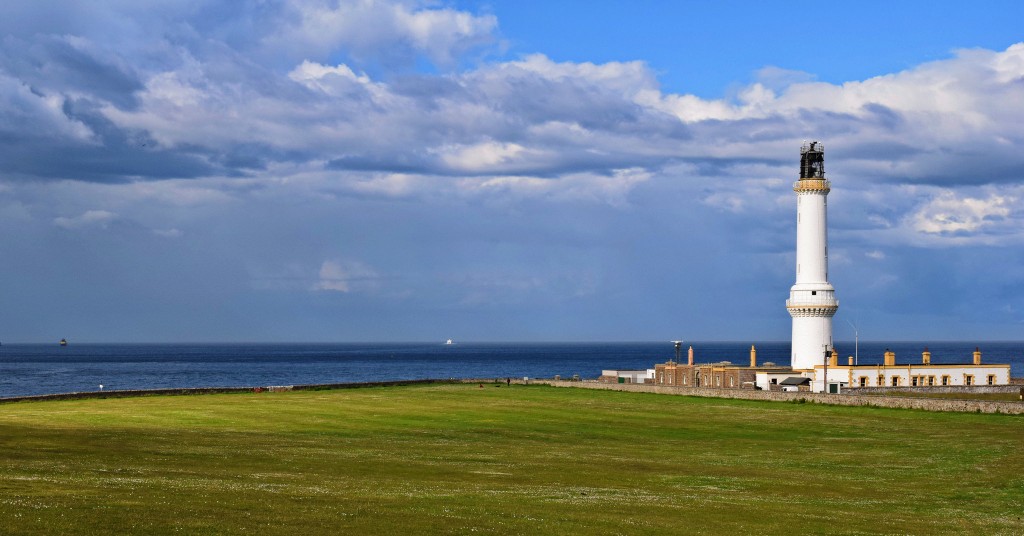 One of the bird species that visitors to Scotland most hope to see is the comical puffin and, if you visit Fowlsheugh at the right time of year, you are virtually guaranteed to see them. They nest here in late spring and early summer among 130,000 other seabirds. At the same time, the cliff tops are covered in an array of stunning wildflowers and, out to sea, dolphin, porpoise and minke whale are seen. Take care on the spectacular cliffs, it is a long way down! Bring binoculars and make sure you wrap up warm as it can be cool in the wind even during summer. 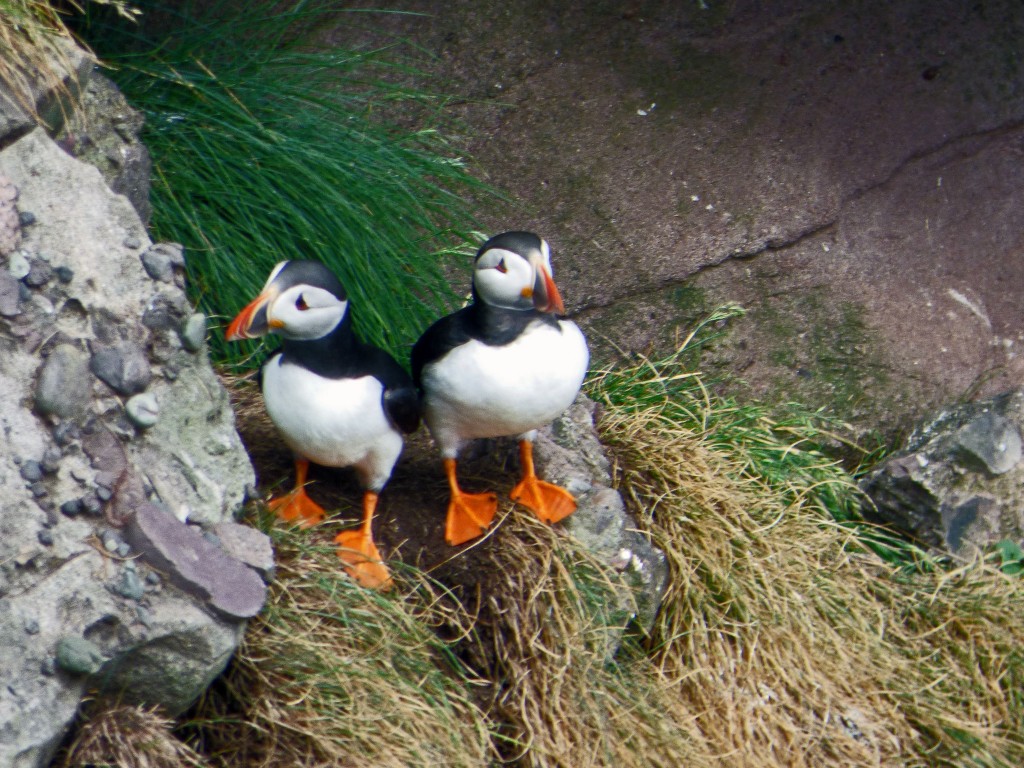 If you visit Dunnottar Castle on a day full of sea mist, you can be forgiven for thinking you have somehow stumbled across a set from Game of Thrones‘ Iron Islands. Ruined castles don’t come much more atmospheric than this one, with a steep descent, then ascent, just to reach the entrance, sheer cliffs and sudden drops, with birds flying below you. Fought over for centuries, Dunnottar used to house the Scottish crown jewels, and was at the forefront of Scottish history until it was forfeited. The last Earl was convicted of treason due to supporting the Jacobite cause in 1715 and the castle was sold and stripped of everything of value, including the floors and ceilings. Thankfully, in 1925, the castle was bought and urgent repairs undertaken. 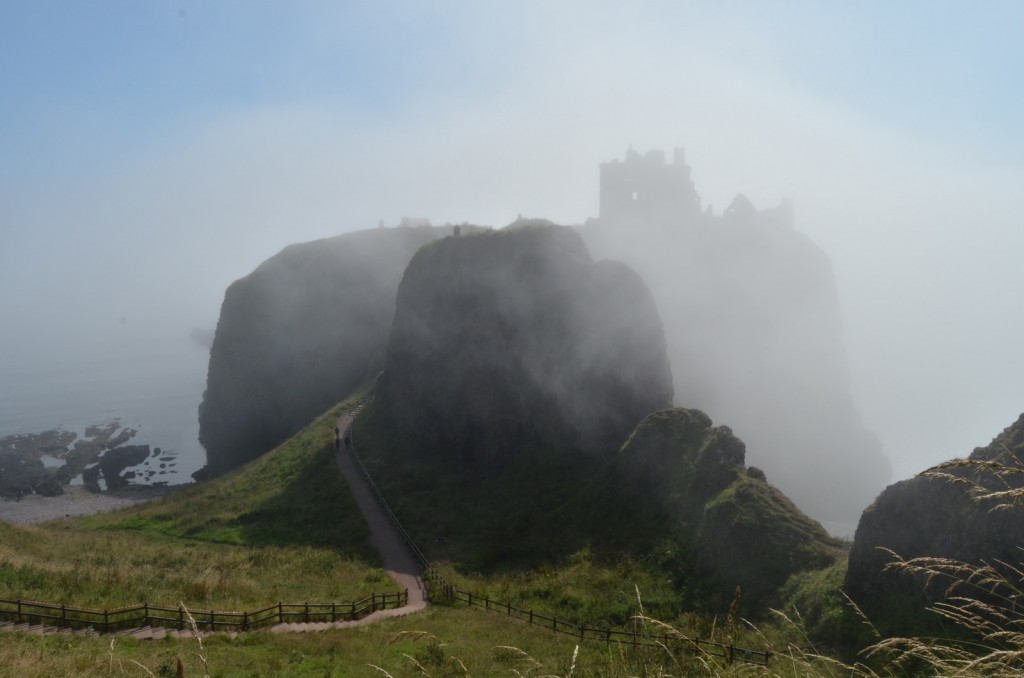 Portsoy is a small harbour town on the north coast of Aberdeenshire, also known as the ‘Dolphin Coast.’ It possesses the oldest harbour on the Moray Firth, constructed in the 17th century, and every year plays host to the Scottish Traditional Boat Festival, attended by thousands of people who arrive to see the old boats. There is a community run museum, the Salmon Bothy, and a renowned ice cream parlour, Portsoy Ice Cream. People also visit to look at the geology of the area, which features green and red serpentine, used as an alternative for marble across the world, including the Palace of Versailles. 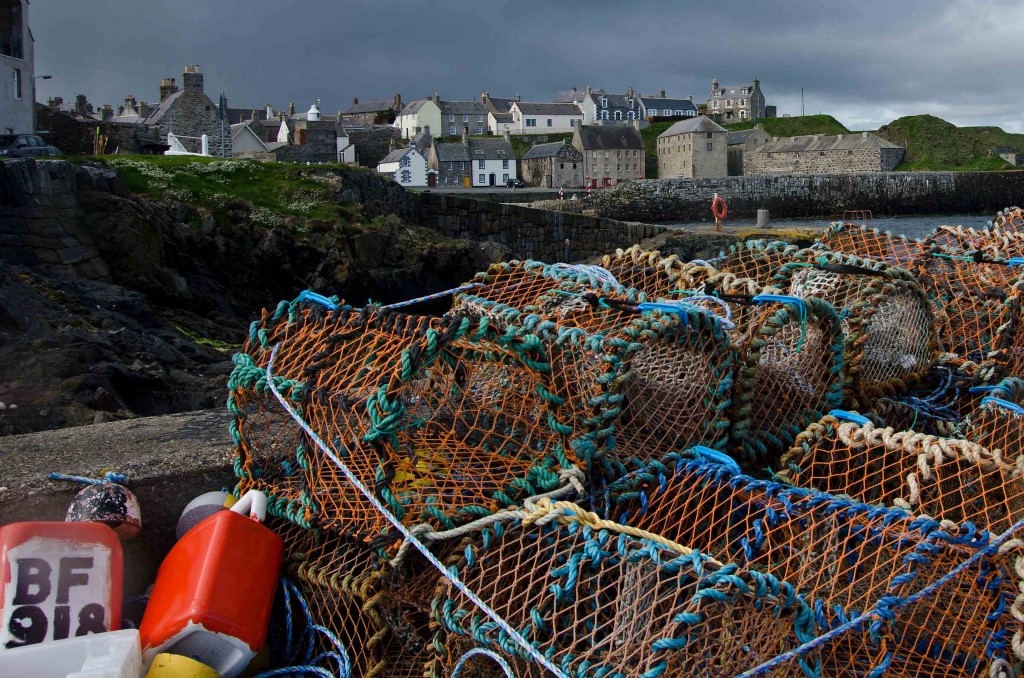 Sandwiched between the sea and tall, inland volcanic cliffs, St Cyrus is a haven for wildlife. A long strip of gorgeous sandy beach, tall dunes and sheltered grasslands covered in colourful flowers make this reserve attractive to people too. Expect to see many insects — especially butterflies — seals, dolphins, and hunting peregrine falcons. You may also see traditional salmon fishing with nets carried out on the beach. 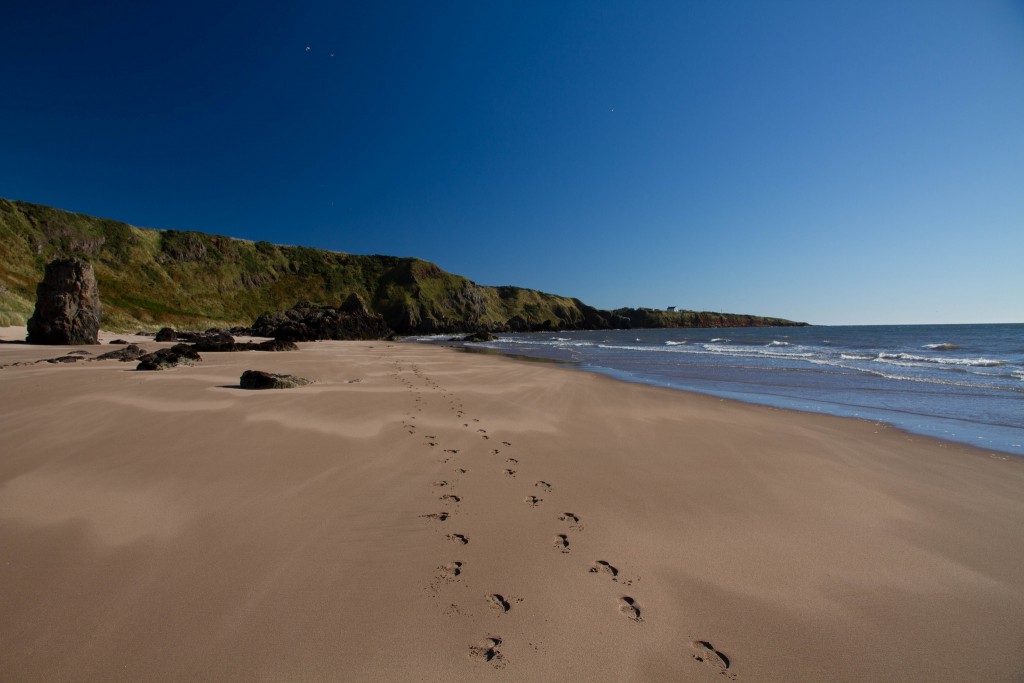