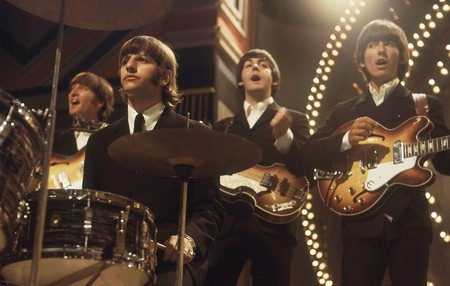 A copy of The Beatles’ album Yesterday and Today once owned by John Lennon is now up for sale, and is expected to sell for more than $200,000.

Including a drawing done by Lennon and personal message on the album sleeve—”To Dave, from John Lennon,” dated Dec. 7, 1971, along with signatures from Paul McCartney and Ringo Starr—the LP is most infamous for its “butcher cover.”

During a shoot in 1966, Robert Whitaker photographed The Beatles wearing white smocks, covered in slabs of meat, and holding plastic baby doll parts. In line with the band’s dark sense of humor, one of the photographs depicting all four members smiling somehow made its way onto the cover of the band’s eleventh American release, which was largely a compilation of tracks from previous UK records, like Help! and Rubber Soul.

Woah! #JohnLennon's own copy of the #Beatles 'Butcher Cover' up for sale @HeritageAuction: https://t.co/Ib7md7bVUu pic.twitter.com/XKleN3JiFc

Some members, like McCartney, were in favor its placement, saying “it’s our statement on the war“—in reference to the ongoing Vietnam War. George Harrison disagreed, recalling his thoughts at the time in The Beatles Anthology: “Sometimes we all did stupid things thinking it was cool and hip when it was naïve and dumb; and that was one of them.”

Soon after its release, Capitol Records ordered plants producing the album to destroy the covers, but, due to the high volume of product, eventually decided to have a photographs of the band situated around an open steamer trunk pasted over top of the butcher images.

Through time, the rare discovery of an untouched butcher cover has continued to surge in price, a sealed first state mono version hitting as high as $20,000 in 2006, and an original stereo copy selling for $125,000 at an auction in 2016.

Now, Lennon’s original copy of the album, dubbed the rarest of the Beatles’ discography, is expected to draw a far bigger buy out than its predecessors.

“The term world class is probably a bit over-used in describing collectibles, however, labeling this unique, rare, and desirable Beatles item as world class is not hyperbole,” Gary Shrum, Director of Music Memorabilia at Heritage Auctions, told Daily Mail.

He continued: “This piece is rare because one it’s the butcher cover that was withdrawn and never sold on the market after the second day. It’s John Lennon’s personal copy, it’s a prototype that had a blank back, which John did artwork on the back of. Plus it’s a stereo copy which was the rarest of the butcher covers, because only a few stereo copies got out when they were for sale. So this is a brilliant piece for any Beatles collector or rock and roll collector that likes to collect the history of music.”

If you’re a true Apple scruff, and have the bank to boot, Lennon’s Yesterday and Today goes under the hammer on Nov. 11 in Dallas, Texas.