Feast Your Eyes On These Beautiful English Film Locations

Discover some of the most beautiful locations in England that have been used in famous films. These places have more to offer to fans who want to immerse themselves in celebrated movies than many a constructed set. We take a look at eight of the best.

Take a guided tour around the second oldest university in the English-speaking world – it dates back to 1209. During your visit, try not to bump into Holmes’ archenemy, Professor Moriarty (Jared Harris), on campus. Sherlock Holmes: A Game of Shadows (2011), directed by Guy Richie, was filmed around the University, where Moriarty is a professor. The walk through the beautiful grounds which are surrounded by greenery, striking architecture and even museums, traces the famous detective’s steps. There are over 150 departments in total at the University.

Whilst on the tour and visiting Trinity and King’s College (two of 29 colleges at the University: 22 are for undergraduates, 4 for mature students and 3 for females only) those most attentive can look out for characters from The Chronicles of Narnia: The Voyage of the Dawn Treader (2010) which uses these two Colleges in the opening scenes of the film. Once the University’s striking grounds have been seen and you’re out and about in Cambridge, consider strolling down to the river Cam for some punting. An advised stop off is The Old Crown for a bite to eat — the puddings come highly recommended. 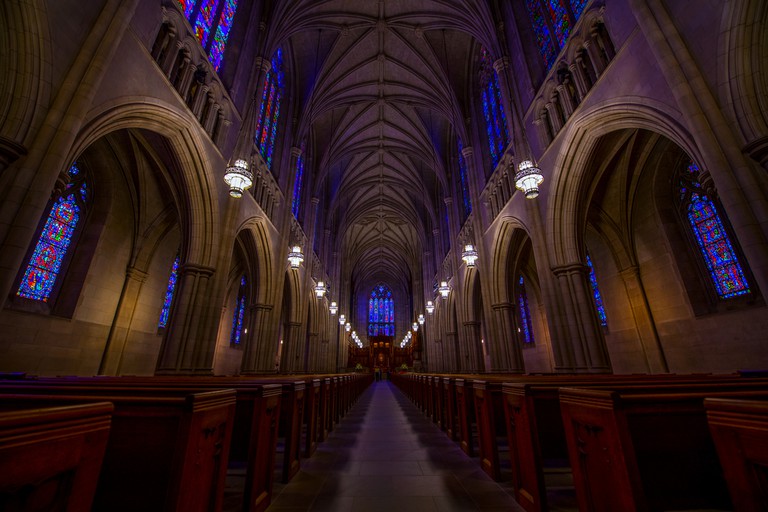 Duke chapel in durham NC | © Arvind Balaraman / Shutterstock
Visit the magical scenes where Harry Potter and the Philosopher’s Stone (2001) and Harry Potter and The Chamber of Secrets (2002) were filmed. The cloisters of the Cathedral where Harry (Daniel Radcliffe) sets his owl flying are open to the public, so any curious fan can walk down them, too. The sights on the grounds will leave you breathless by how beautiful and full of fascinating history they are. More avid fans can pretend to be a Hogwarts students by borrowing a black gown from one of the Durham University students, who actually use the gowns on a daily basis. Right across the green from the Cathedral is the historic Castle; both part of UNESCO World Heritage. The University offers interactive guided tours of the Castle where unheard of stories and facts about the only chapel in the world with Norman and Saxons influences in the same room are told. Additionally, the Castle’s past owners with their comical feuds will be a main part of the interactive tour.
Open In Google Maps
Durham, England, DH1 3EH, United Kingdom
+441913387178
Visit Website
Give us feedback

After visiting central Durham, Easington Colliery, just 22 minutes away by bus or car, is another top destination for ballet and classic film fans. Easington Colliery is located on Durham’s Heritage coast and is the fictitious town of Everington, home to Billy Elliot (2000).Along these roads are where the scenes of Billy (Jamie Bell) dancing out of anger and frustration after his father refuses to let him dance were filmed. The house used for Billy’s home has been demolished, but nearby the spot where Mrs. Wilkinson (Julie Walters) drops him off after dance lessons is still there on Angus Street. You can also walk 2 minutes around the corner to see where Billy’s brother (Jamie Draven) gets arrested after being chased by police on Anthony Street. From atop the hill there is superb view of the North sea.

Visit Cumbria and the Lake District

Miss Potter (2006), starring Renee Zellweger as Beatrix Potter, was filmed around the spectacular Lake District. The area is the biggest National Park out of 15 in England, and is comprised of whimsical lakes and soft mountains. You can visit the highest mountain in the park, Scafell Pike (image 10), that is 3210 feet tall (978 metres) and even the largest and longest lake in England. Lake Windermere is 14.8 square kilometres and 10.5 miles long (16.9 kilometres).

Tranquil picnics are common on the grassy planes where one can take in the landscape that enchanted the real Miss Potter. The surrounding scenery inspired her children’s books and delicate drawings. It is hard not to fall in love with the view that is overwhelming with bright to dark greens and hues of blue. Not to mention the wild flowers that sprout through scattered patches of grass.

If fans really wanted to embody Miss Potter, then there is a tour available of the film locations used. The tour starts with a leisurely cruise on Lake Windermere, where the spectacular sights will be in abundance and chats with local fishermen will add to the experience. From the middle of the lake, all that can be seen is the undisturbed nature. This area of the Lake District offers panoramic views of high peaks, open skies and sparkling waters.

The tour then leads to Hill Top Farm to see the 17th century cottage in which the real Miss Potter wrote her stories. The garden features in many of Miss Potter’s drawings and it is no surprise considering it boasts a range of spectacular flowers such as honeysuckles, peonies, lavender and roses. There are even fruit plants like strawberries, raspberries, rhubarb and currants giving life to the grounds. For nature lovers, this tranquil spot will seem like paradise. 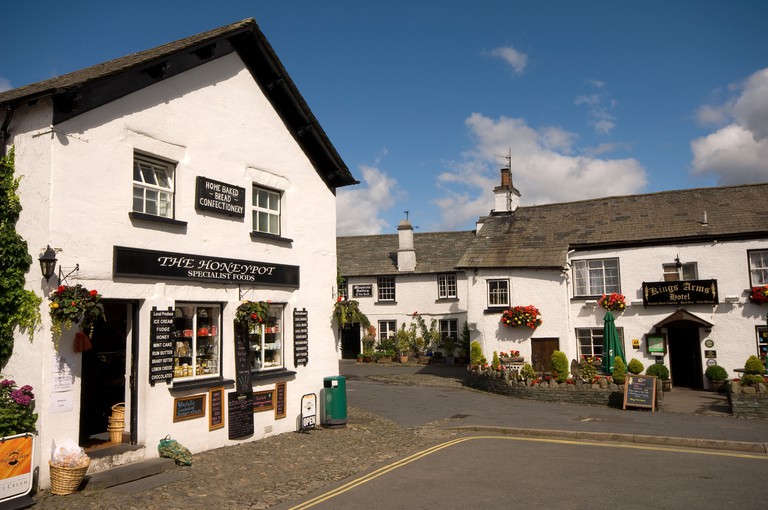 © PURPLE MARBLES CUMBRIA / Alamy Stock Photo
After the cottage, the tour will head to Hawkshead, a marvelous medieval village. Although this town is small, it is rich in history. It was once home to the poet William Wordsworth, in fact his old Grammar School is a top site for visitors. While here it would be wise stop by an inn and try the renowned local ale and a wholesome homemade meal – Hawkshead is known for being one of the best places to dine in the Lake District so your pause will be worthwhile.

On the way home consider passing by Little Langdale, part of the National Trust, to see the Cathedral Cave also known as the Cathedral Rock in the Cathedral Quarries. This 40 foot (12.2 metres) tall cave was used in Snow White and the Huntsman (2012) directed by Rupert Sanders and starring Charlize Theron, Chris Hemsworth and Kristen Stewart. This film was also set around other places in the Lake District such as Blea Tarn and the Langdale Pikes.
Open In Google Maps
Hawkshead, United Kingdom
Give us feedback 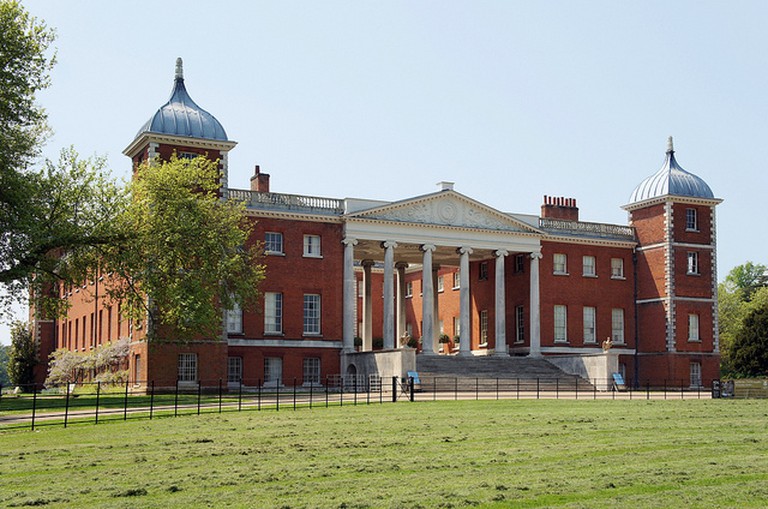 Osterley House | © Maxwell Hamilton /Flickr
Osterley, the Wayne Manor in The Dark Night Rises(2012), is home to Batman (Christian Bale) and his surrogate father figure, Alfred (Michael Cane). Osterley Park, also part of the National Trust, is a Georgian mansion with vast amounts of private land surrounding it. The country house was once in the rural countryside, but now it is in suburban London.

During the visit to the large house, careful attention should be taken in the library. In here, hidden behind a bookcase, a secret passage that in the film led to the Bat Cave will be revealed. Batman enthusiasts can sneak behind the books and walk down the corridor where Batman held his secret headquarters. Other overpowering features of the mansion include the 130 foot (39.6 meter) long Gallery and the spectacular entrance hall leading to the main staircases (image 19); all feature in the film as they make a grand impression. Scenes from Miss Potterwere also set here.
Open In Google Maps
Jersey Road, Isleworth, England, TW7 4RB, United Kingdom
+442082325050
Visit Website
Give us feedback

The charming Antony House, an early 18th century mansion at Torpoint is the home of Alice in Wonderland (2010) filmed by Tim Burton and starring Johnny Depp, Mia Wasikowska, Helena Bonham Carter, Anne Hathaway and Alan Rickman. This house is, unsurprisingly, part of the National Trust and since its conception, has been inhabited by the Carew Pole family. The Carew Pole’s, who were involved in the English Civil War, have added an interesting history to the mansion that you can discover on the tour. Antony House is credited as one of the best surviving Queen Anne buildings. Inside, there are a wide range of portraits and antique furniture to marvel over and outside, there are whimsical gardens, sculptures, a maze and a protected flower garden that has spectacular rhododendrons, azaleas, magnolias and camellias. The grounds look out over the River Lynher estuary. In Alice and Wonderland the house appears when Alice is proposed to and the celebratory event is held in the house gardens.

As a perfect end to the day after leaving Antony house, admirers of Alice in Wonderland can stop by the nearby harbor of Charlestown. This is the dock where Alice (Mia Wasikowska) leaves. The harbor is also the setting for older films such as The Eagle Has Landed (1976) directed by John Sturges and starring Michael Cane, Donald Sutherland and Robert Duvall and The Three Musketeers (1993) directed by Stephen Herek and starring Kiefer Sutherland, Charlie Sheen and Chris O’Donnell.This is a small but quaint dock full of history waiting to be learnt about the port in its more affluent days, the involvement of the town during the war and the countless stories of shipwrecks. It is a historical part of Cornwall and began as a small excavated dock in 1792 as the only shipping outlet in the entire area. Later, expansions designed by Charles Rashleigh, occurred and remain to shape the dock today. However, before any of the changes, in 1790, there were only 9 fishermen and their families living in Charlestown.