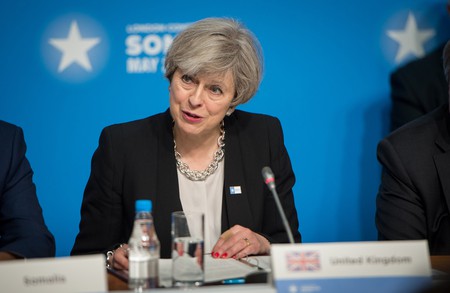 With a week left before the UK general election on June 8, “Liar Liar”, a song harshly criticizing controversial British Prime Minister Theresa May, is making its way to the top of UK music charts.

However, what the song lacks in quality it makes up for with its message. Besides repeatedly calling May a liar in its chorus, the band targets, among other points, the deplorable state of the National Health Service and educational system in its verses. And as the track’s YouTube link notes that all proceeds from downloads of the song between May 26 and June 8 will be given to food banks around the UK and The People’s Assembly Against Austerity.

Currently, “Liar Liar” is second on the iTunes Songs chart, bested only by the Justin Bieber remix of Luis Fonsi and Daddy Yankee’s “Despacito“. According to The Independent, it had topped the chart briefly before dropping back below “Despacito”.

On May 31, The Official Charts Company stated that “Liar Liar” had reached the third slot on the Official Singles Chart, so it isn’t difficult to imagine it could hit No. 1 come Friday, although it will have to summit—you guessed it—“Despacito” first. At the time of this article’s publishing, the song has received nearly 250,000 streams on Spotify and over 1.5 million plays on YouTube.

Oddly enough, The Big Top 40 show on Heart and Capital FM have both reportedly banned the track, and BBC has decided to remain impartial in accordance with OFCOM ruling, a spokesperson stating: “We do not ban songs or artists, however our editorial guidelines require us to remain impartial and the UK is currently in an election period so we will not be playing the song.”

Ultimately, whatever your stance on ska music, you can’t knock a song with a genuine purpose, so give “Liar Liar” a listen below.