These Contemporary Artists Turn The Music Video Into An Art Form 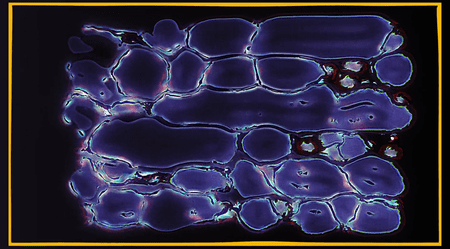 This August marks 35 years of MTV and the birth of the music video as we now know it. Our visual, post-internet society demands a visible translation of the audible, and so the music video has been adopted as a necessary marketing strategy. This is not to dismiss the creativity involved in the making of mainstream music videos — Drake’s James Turrell-esque Hotline Bling and The White Stripe’s Sofia Coppola-directed I Just Don’t Know What to Do With Myself are sure examples of artistry — but there’s no escaping the commercial motivations behind their creation. So while MTV celebrates 35 years of the mainstream, we take a look at contemporary artists who are turning away from the self-promoting music video model and reclaiming it as an art form. Here we highlight some of the fusions of music and visuals that may have slipped under your radar.

UK producer and artist Torn Hawk, otherwise known as Luke Wyatt, uses retro imagery to complement his own electronic compositions. Using a process he calls ‘video mulching,’ Hawk splices and collages old VHS footage, which is re-contextualized in his own disjointed narratives. Teleshopping, pornography, and TV dramas merge into one as imagery is repeated, reversed, and toyed with on Photoshop, before being returned again to VHS.

Tyrone Lebon is the UK photographer and filmmaker responsible for those semi-naked shots of Justin Bieber in his Calvin Kleins, and over the last few years, he’s certainly made an international name for himself. Lebon is also the director behind the three released videos from Mount Kimbie’s critically acclaimed album, Crooks & Lovers. His candid and beautiful photographic approach is evidenced in each of these different videos, but Before I Move Off is a particularly heartwarming amalgamation of photographs taken on a three-week trip around the world.

Nic Hamilton is a visual artist whose abstract filmic endeavours explore the relationship between music and the moving image. By fusing digitised footage with deconstructed electronic sounds, Hamilton enhances both visual and auditory experience. Through this mirrored distortion, where static sounds are consolidated with static imagery, he creates an integrated and captivating union of music and video.

Kevin Paschold and Sebastian Kökow are the young Berliners behind the creative project the29nov. Based across several YouTube channels, the pair create music videos for the love of good music. ‘If you have a really good track and some good footage and you bring these two elements together you can make something that’s almost greater than the original,’ say the duo in an interview for Inverted Audio. the29nov edit everything from found footage to animation in their accompaniments to newly released techno tracks, seeing it as a way of showing appreciation and giving something back to the artist. The seamlessly synchronized and compelling results are, again, proof of the harmonious interaction between music and the moving image.