The World's 10 Most Important Film And Cinema Museums

While the world box office has long been dominated by Hollywood, every corner of the globe has its own unique contribution to cinema. Whether you are looking to learn more about films, technology or cinema’s impact on society, here are the best museums in the world for cinephiles. 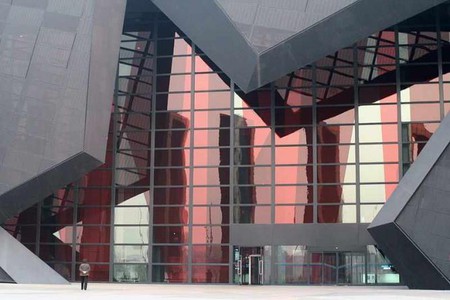 Now into its tenth year, the China National Film Museum boasts itself as being the world’s largest professional film museum. It was first built to serve as a memorial to the birth of China‘s film industry 100 years ago, with the building demonstrating how the industry has developed over this time. Within its 20 exhibition halls the museum houses materials from more than 1500 films, as well as a collection of more than 4300 photographs and documents from over 450 film pioneers. It is a popular destination for both casual tourists and academics, particularly in its academic exchange programs and research activities. It is also home to three 35mm cinemas and an IMAX cinema with the largest screen in Asia.

While Australian film on an international scale only has a few major outputs annually, domestically it is a very big business. The visitor numbers for the Australian Centre for the Moving Image go some way to proving this, with the museum being the second most visited museum or gallery in Australia. Its primary aim is to curate, preserve and exhibit Victorian, Australian and international screen content in all its filmic, televisual and digital forms. It began its life as the State Film Centre of Victoria in 1946 and has since grown to include two galleries which house changing exhibitions and moving image experimentations, the Screen Worlds exhibitions and two main cinemas which play host to the museum’s weekly and monthly film programs.

One of six film museums in Germany, Frankfurt’s German Film Museum stands out due to its commitment in film education and its close interaction with the wider film culture. Artists regularly work with the museum to create new films, and the history of film comes to life within the museum for example in the replica of the Grand Café, which documents the Lumière brothers’ screening in 1895, and replica film studios and special effects demonstrations. Permanent displays explore the technological aspects of cinema and the effect that film produces. The changing displays are wide ranging, with the thematic cinema programs, seasons and premiers regularly gaining widespread attention. A comprehensive museum which looks to the past to inform cinema’s future.

If you want to know about cinema before cinema, Dubai’s Moving Image Museum is undoubtedly the place to go. It is surprising in a film museum to find exhibits which include prehistoric artifacts, but, as the museum points out, man has been fascinated with capturing movement since the dawn of civilization. The collection on display is Akram Miknas‘ private collection which he has accumulated over the past 25 years. All of the items in the museum are original, and there are a number of interactive exhibits which allow visitors to better experience the rich history of the moving image. It is the only museum of its kind in the Middle East with a collection that stands out in the world at large.

When thinking about film, one place springs to mind. The Hollywood Museum houses a 10,000-strong collection of memorabilia from America’s film and television history. While there are a number of museums in and around Hollywood and the greater Los Angeles region, this is the official museum which, with over four floors of displays, houses the most extensive collection, as well as a comprehensive history of Hollywood and the walk of fame. The costume collection includes hundred of items, including Marilyn Monroe’s famous million dollar dress. If you head down to the dungeon you can also see sets from cult horror and thriller films. Situated within the Max Factor building, it is also an important part of the architectural history of the region.

The Museum of Cinema, France

For fans of European and French cinema in particular, this is simply unmissable. For fans of architecture, too, this Frank Gehry building is worth making a beeline for when you are in Paris. The Museum of Cinema holds one of the world’s largest collections of films, movie documents and objects relating to the cinematic art form. The screening rooms attract cinephiles from across the world, with multiple retrospectives, spotlights on up-and-coming directors and changing film seasons appealing to even the most discerning film watcher. The film library is the perfect place for film lovers to while away an afternoon or ten.

Located in a historical mansion on the grounds of the Odessa Film Studio, the Museum of Cinema showcases the history of filmmaking and cinematic activity in Ukraine and the Soviet Union. The museum itself displays a vast collection of over 10,000 works including films, books, scripts, prizes, sketches, advertising posters and other paraphernalia relating to Soviet cinema. The history of the site also makes the museum a worthwhile visit; the film studio dates back to 1919, and one of the most popular exhibition rooms explores the invention of cinema, making a convincing claim that its real birthplace was Odessa. A museum packed with wide ranging artifacts, from cinema’s inception through to postmodern and avant garde works.

Housed within the historic Kaufman Astoria Studios in Queens, the Museum of the Moving Image seeks to expand the public’s knowledge and appreciation of the art, history, technique and technology of the moving image in all its forms. It is the only museum of its kind in the United States. Unlike Dubai’s moving image museum, this New York museum focuses on decidedly more modern elements, though the range of objects date from the 19th century up to groundbreaking endeavors in digital art. There are plenty of interactive displays to engage audiences, and screenings of contemporary and classic films from across the world as well as its online projects. A groundbreaking museum.

A museum, but not in the traditional sense. The National Museum of Cinema sets itself apart as a significant institution in the development and study of world cinema due to the wide-ranging work that it does for the scientific and educational aspects of cinema. The exhibitions cover technology, genre, different types of film crew, as well as objects of interest, and a multiplex. It is situated within one of Turin’s major landmarks, the Mole Antonelliana, and it is the tallest museum in the world. The Swiss set designer François Confino created a space which offers visitors continuous and surprising audio and visual stimuli. If you can get tickets, it is particularly worth visiting as part of the Turin Film Festival.

Formerly known as the National Museum of Photography, Film and Television, the National Media Museum is the latest addition to the Science Museum Group. It is situated within Bradford, the world’s first UNESCO city of film, a title that was bestowed upon the city due to its rich film history, film locations and multiple celebrations of film throughout the year. Like the city that it is in, there is plenty within the museum which celebrates film. There are over 3.5 million objects of historical significance within the museum’s seven floors, plus a number of unique additions such as the Pictureville Cinema, Europe’s only permanent, dedicated cinerama installation in Europe. A free museum that shows supreme dedication to cinema’s past, present and future.