The Row Across The Atlantic Ocean That Started A Competition 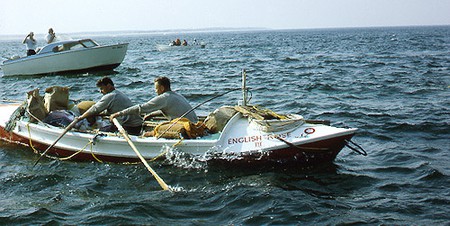 David Johnstone had an audacious idea. The English journalist wanted to row across the Atlantic Ocean from North America to Europe.

He took out an advertisement in The Times enlisting help: “Will five fortitudinous oarsmen over 28 join me and engage in second-ever transatlantic rowing voyage?”

British Army Captain John Ridgway responded to the ad, but he and Johnstone realized they wouldn’t work well together, so they parted ways. Ridgway, though, was still fond of the challenge, so he sought his own partner to attempt the feat. Sergeant Chay Blyth came into his office to volunteer his services.

The two British Army paratroopers left the shores of Cape Cod, Mass., on June 4, 1966, less than two weeks after Johnstone departed with John Hoare from Virginia Beach, Va., on May 26.

“We thought it would be good to race them,” Blyth told Culture Trip.

Unfortunately, Johnstone and Hoare never finished the “race.” Their boat, the Puffin, was picked up by a Canadian destroyer-escort that September some 600 miles southeast of St. John’s, Newfoundland, with no signs of life.

Blyth and Ridgway, on the other hand, continued their journey. The duo overcame hurricanes, storms, huge waves and whales bigger than their boat, English Rose III. Finally, after 92 days and some 3,000 miles later, they reached the Aran Islands off the coast of Ireland; accomplishing a feat only done once before in 1896 by Norwegians George Harbor and Gabriel Samuelson (who rowed from New York City to Le Havre, France in 60 days).

“We were delighted to have survived,” Blyth said. “… We were on about 400 calories a day.”

Accomplishing this taxing challenge inspired Blyth to lay the foundation for others to follow suit. Thus began the Atlantic Challenge — a row across the world’s second largest ocean, beginning at the Canary Islands and ending in Antigua.

Competitors race boats as solo, pairs or four-person teams. There are certain specifications for the vessels and useable technology, what can be brought onboard and even how drinking water can be obtained — “all drinking water shall be produced using a water maker from sea water.”

Despite achieving a unique feat, Blyth wasn’t done with his adventures at sea. On Oct. 18, 1970, he set sail again, attempting to become the first person to single-handedly sail around the world non-stop from east to west. He would accomplish this task some 290 days later.

“The world wanted adventurers — you could sell your story to newspapers and publishers,” Blyth said. “I thought I could make a living from this way of life.” 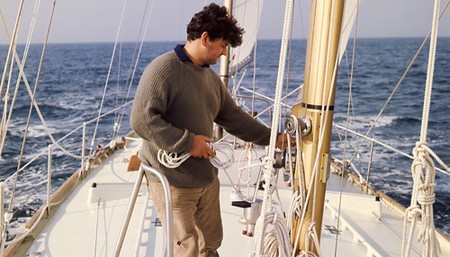 Chay, who has been awarded the British Empire Medal (BEM) and was made a Commander of The British Empire (CBE), has certainly continued his seafaring ways. Chay, 76, and wife, Felicity, embarked on a three-year journey aboard the Wullie Waught around the world beginning January 2014. Unfortunately, the excursion was cut short because of a health problem.

“We are in Turkey but this is as far as we are going,” Blyth said. “We are going to sell our boat. It’s been great though, and a great boat.”