The Most Important Works By Frank Auerbach 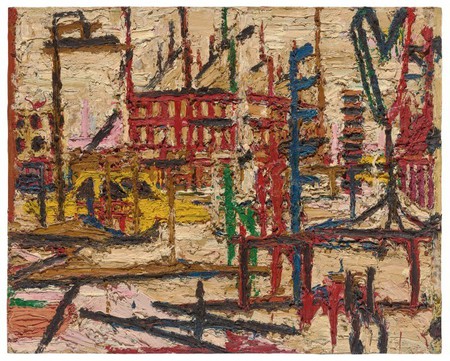 “Painting is mysterious, and I don’t want to demystify it. It’s no good presenting artists as approachable blokes who happen to paint,” explains one of Britain’s most important post-war painters, Frank Auerbach. Painting 365 days a year, his work embodies an obsessive drive to reach the essence of the subject, be it the sitters he worked with or the area around his studio near Mornington Crescent. Here are some of his most important works.

E.O.W stands for Estella Olive West, Auerbach’s most frequent model from the early 1950s to 1963. They met performing in a play when he was 17, Stella, 32. He moved into her boarding house in Earls Court and a passionate relationship began that continued into his marriage with Julia Wolstenholme. The portrait is a key example of the sculptural quality his early portraits possessed with a restricted palette of earthy but lively reds and yellows. Continuously applying and removing layers between 10 and 200 times, the paint, oozing like mud, creates its own peaks and crevasses, broadcasting the curiosity and fixation Auerbach felt for Stella.

Auerbach met model Julia Yardley Mills in 1956 at the Sidcup College of Art. She was fascinated with Auerbach and would sit for him every Wednesday and Sunday for over four decades. There was no romantic relationship between the two, but a deep appreciation of each other in a professional sense. Julia loved the excitement of sitting for Frank, and he relished in her ability to pose without complaining for hours. Moving out of the heaviest impasto works, this monochromatic work of Julia’s reclining head captures a melancholic quality with a fluidity of brush strokes that maintains an impression of a calmer relationship than with Stella.

Considered to be one of the worlds greatest living artists, and in celebration of his 84th birthday. Frank Auerbach's latest exhibition presenting around 70 paintings from throughout his career is a must see! #frankauerbach #mustsee #exhibition #london @tatebritainlondon

Auerbach married Julia Wolstenholme in 1958, a relationship that didn’t manage to end his stormy affair with Stella. After nearly two decades of being apart, they reunited in 1976. Julia became one of Frank’s regular sitters and her portraits have a more nurturing quality. Particularly in this portrait, the detailed depiction of her face is achieved through black contouring, and the palette of reds and pinks emits warmth and comfort. Unlike J.Y.M. and E.O.W, Julia didn’t relish in the act of sitting for Frank, and would often fall asleep after hours in the same pose. It is in these moments that intimacy is revealed between the artist and sitter. 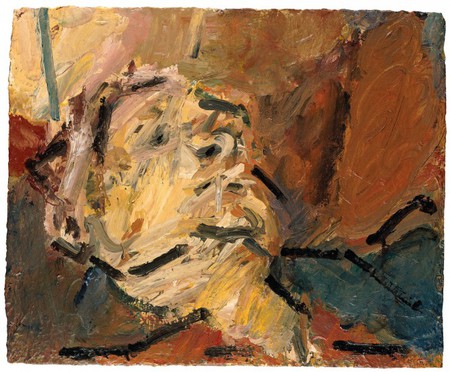 In this rare and elusive self-portrait, Auerbach contrasts dark and light using charcoal and an eraser. The work is made up of layers of paper due to Auerbach’s technique of scraping and peeling away at the surface to start the search for the subject’s essence. However he tended not to use himself for his works, preferring to decipher the essential nature of his sitters or of familiar places. This technique and composition produces a similar emotive response to his solemn early paintings. His drawings in particular have been said to possess remnants of the heavy shadows of the war. 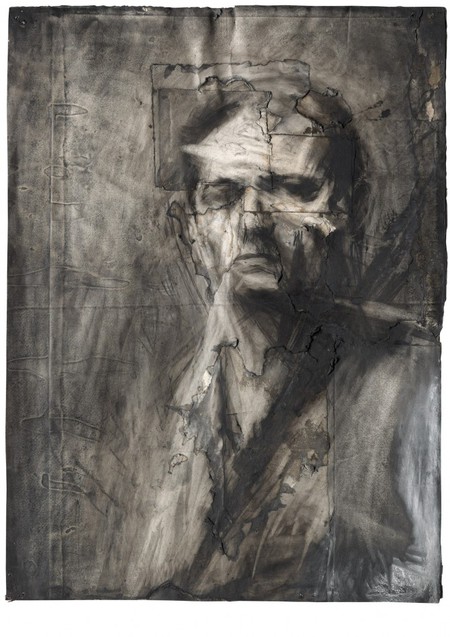 This painting is one of a small series in which he depicts the full standing representation of Stella in the garden with her two children in the background. This unusual composition was not one that he wanted to return to, and took many attempts to feel adequately happy with the result. Stella’s figure seems permanent and solid; a force of nature. This work is unusual for more than just the composition; Auerbach rarely painted group portraits, and even more rarely were scenes situated outdoors. However, the rich palette of ochres, deep reds and pinks are typical of his works from the 60s. 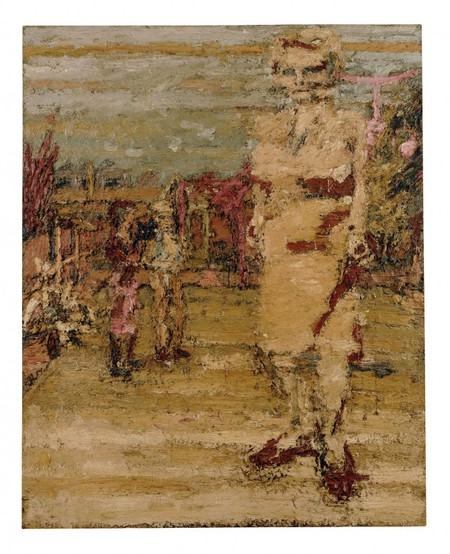 Auerbach practically lived in his studio, which was acquired from his fellow friend and artist Leon Kossof in 1954, and he has remained ever since. When searching for locations for his landscapes, Auerbach only liked to explore, at most, twenty minutes from his studio. He could then hurry back with his sketches to record the activity of North London in the same day. Mornington Crescent is a beautiful amalgamation of pale ochres, reds and primary colours. At first glance the forms seem blurry and abstract from the impasto paint of his early landscapes, but the vibrant colours begin to separate and clarify the buildings, lampposts, car and road. Auerbach’s unwavering participation in his immediate surroundings creates a work that resonates joy in movement, and an understanding of the very fabric of the space in which he returned to often. 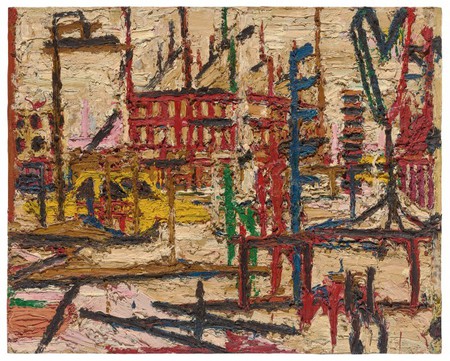 This painting, compared with many of his landscapes, seems to be a fairly literal representation of the park, with the distant line of trees and the flowing hill. The marks of paint lead you to follow the gradient and topography of the earth. With no seasonal reference in the title, as he often gave, the blue-white of the sky and cold greens seem to represent a fairly mild day, depicted with a calm and isolated attachment to the area. The painting is void of activity, human or natural, so the viewer can imagine Auerbach is comfortably alone in his search for the personality of the park. 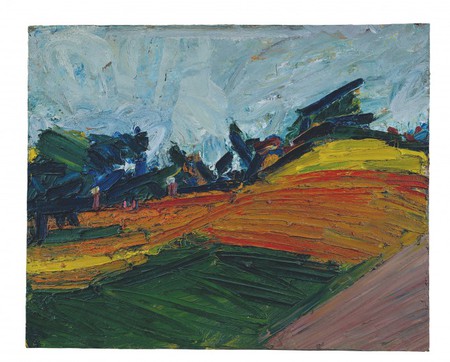 Returning yet again to Mornington Crescent, Auerbach depicts the landscape in a profoundly different light to his interpretations in the 60s. The colours in the sky and buildings are full of drama, vibrancy and feel more relevant to this technological age. The colours are also more romantic, and the paint is applied less chaotically than in previous works. Words are also rarely readable in his paintings, and yet the word ‘HOTEL’ is clear. The architecture and buildings have been given their own significance, and the commercialisation of this area is represented in this work.

This later painting feels instantly different from his earlier works. The colours are shimmering, harmonised and prismatic. The central form is a running figure with a backpack, which feels like a visual testimony to the age. In the 45 years of living and working in the area, the unusual activity of repeatedly returning to the same patch results in works that act as an archive of the adaption of people and places. Auerbach stated ‘I’ve been wandering around these streets for so long that I’ve become attached to them and as fond of them as people are of their pets’. 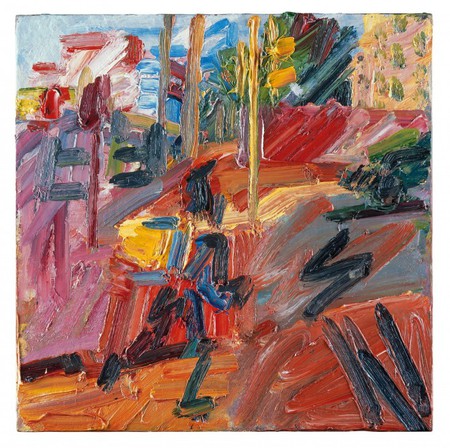