The Latest Dr Faustus Production Is A Reimagining Done Right 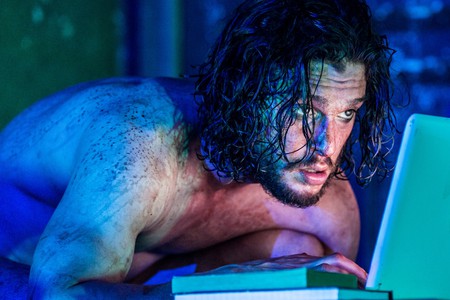 Kit Harington in Doctor Faustus. Running at the Duke of York's Theatre London|©Marc Brenner/Courtesy of The Jamie Lloyd Company

Game of Thrones star Kit Harington finds himself in a modern reinvention of Dr Faustus, playing at London’s Duke of York Theatre from now until June 25th. Here’s what we thought.

For as long as creatives have attempted modern reimaginings, the literary world has been forced to suffer through regular butcherings of classic texts. Whether it’s Guy Andrews sucking the life out of Jane Austen’s beloved Pride and Prejudice for the BBC in Lost in Austen, or the total purging of any and all wit from Shakespeare’s Twelfth Night in the atrocious She’s the Man, there is seemingly no end in sight to the excruciating pain that sadistic directors and writers are able to inflict upon the world.

Yet, from amongst the great cloud of travesties, every now and then a ray of sunshine breaks through. Baz Luhrmann and screenwriter Craig Pearce proved unequivocally with Romeo+Juliet that it’s possible to bring Shakespeare into the modern world. Whether it’s the inspired transposing of the iconography of the American Western into battles between the young Capulet and Montague men, or the brilliant use of popular music during Romeo and Juliet’s meeting to bridge the gap between the centuries (the poignancy of this moment is often lost on contemporary audiences who are not equipped to pick up the significance of the sonnet form being introduced into the young lovers’ exchange), Luhrmann and Pearce give a masterclass in contemporary reimaginings. It is to this small school that playwright Colin Teevan, and his vivid adaptation of Christopher Marlowe’s Dr Faustus, belong. 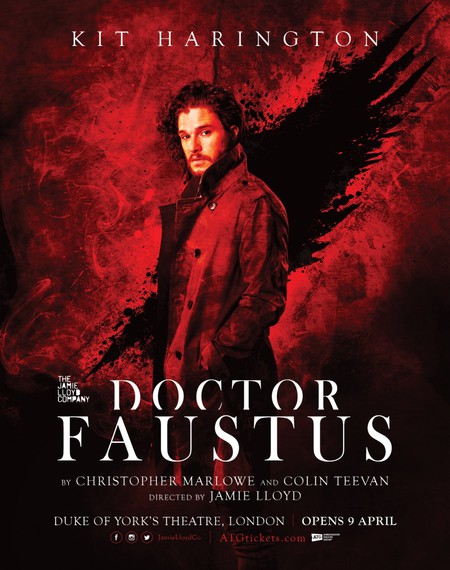 A contemporary of William Shakespeare, and then the foremost Elizabethan tragedian, Marlowe adapted in Dr Faustus the tale of the far older German legend of Faust. It tells the story of a scholar who, dissatisfied with his modest life, sells his soul to the Devil in exchange for unlimited knowledge – his to enjoy for 24 years – before being carried off to eternal damnation in Hell. Kit Harington makes a long-awaited return to the West End’s boards as the eponymous Faustus, delighting Game of Thrones fans – who were clearly in abundance at The Duke of York Theatre – and proving that he in fact knows a great deal, as it were, about his craft. It’s an inspired casting call, with director Jamie Lloyd taking full advantage of Harington’s godlike status among pop culture vultures, knowingly weaving it into the context of the play. 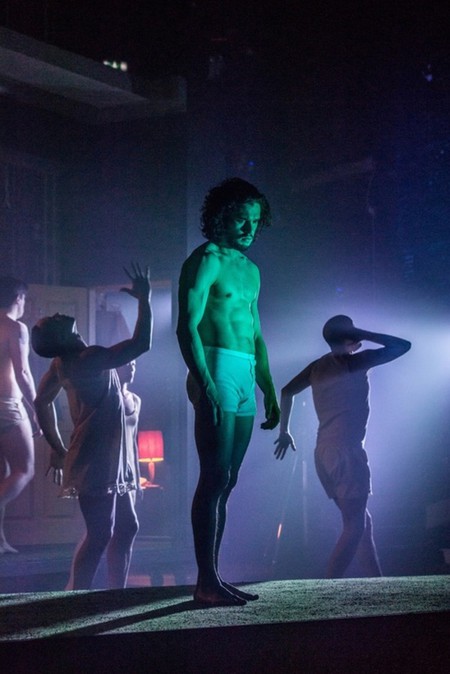 For an initial period, the show sticks with Marlowe’s original material, albeit transfiguring it into a modern environment. Of course, many concessions are made for the contemporary audience – Faustus’s early drool-inducing absorption into his television and laptop lay the foundations for later nods to celebrity-obsessed culture, with a copy of Hello magazine even making a brief and surreal appearance during Faustus’s negotiation with Satan’s demons. Following Faustus’ long-drawn-out decision to strike his dastardly deal (he’s an indecisive and largely pathetic figure in the beginning, a socially awkward loser wallowing in near-isolation in a poky bedsit), the proceedings take a mad turn, throwing Marlowe’s text out the window, and the rule book along with it, as we descend into an outlandish, eccentric whirlwind, pumped full with pop culture references.

Teevan delivers a harrowing indictment of celebrity culture, with some social commentary on the soullessness of the banking industry thrown in for good measure – a joke at David Cameron’s expense even making a quick appearance to the utter glee of the audience (clearly the result of a quick, post-Panama Papers rewrite). The knowledge-thirsty Faustus of the literary lineage is replaced with an arrogant, fame-obsessed youth who uses his newfound powers to build a career as a globally recognised magician of rock star standing – think Dynamo meets Kanye West.

Make no mistake about it: Dr Faustus is utterly berserk, but brilliantly so. By the time you return from the intermission to find Jenna Russell as an effervescent Mephistopheles, perched on the stage (and belting out a medley of karaoke hits that include Meat Loaf’s Bat Out of Hell) with Kit Harington’s face plastered across her t-shirt, you’ll already be long past the point where Teevan’s writing could surprise you. Perhaps his rewrite would have suffered without the brilliant cast there to bring his ridiculous vision to life.

Aside from the larger-than-life Russell, Tom Edden delivers a deliciously camp rendition of each of the Seven Deadly Sins, personifying each vice in turn, every one of them more outrageous than the last. Lloyd goes for the shock angle: the mis-en-scène is packed with visceral, gross-out elements; naked and semi-naked demons rabidly spew black and white foam – far from the only bodily excrements to make an appearance – whilst the actors writhe about, contorting themselves in a ghoulish manner, while references to sexual violence are too many to count. From start to finish, Dr Faustus is a crude, lewd, camp, outrageous and carnivalesque extravaganza. 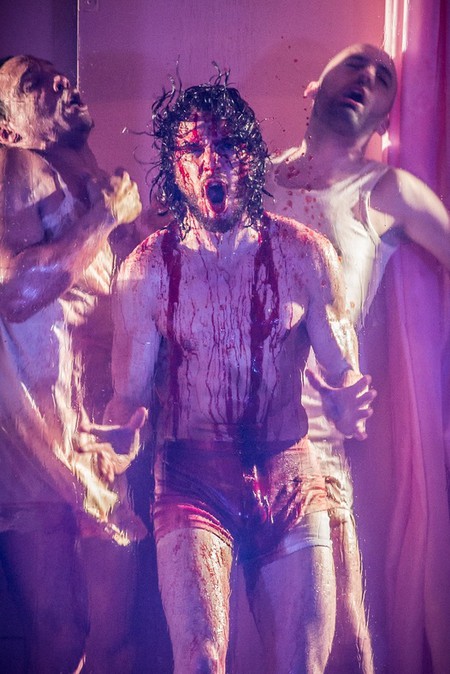 On account of all this and much more, Dr Faustus has suffered at the hands of more traditional critics – but this show is not for them. The production team behind Dr Faustus, Jamie Lloyd Theatre Company, have proven time and again their commitment to diversifying audiences, seeking to reach out to young audiences in particular and create a new generation of theatregoers – the ungenerous reviews are at a clear discord with the generally gushing reactions from these audiences so far. A common criticism has focused on the so-called spiritual emptiness of Teevan’s rewrite, circumnavigating the moral content of Marlowe’s original text. However, these critics, blinded by their deference to the original, have missed the fact that this is where Teevan’s strength lies – his Dr Faustus is not a celebration of Marlowe’s work, and it’s foolish to act as if it tries to be. His is a celebration of the Camp, that oh-so-postmodern sensibility famously defined by Susan Sontag as revelling ‘in artifice, stylisation, theatricalisation, irony, playfulness, and exaggeration rather than content.’

Through their eclectic aestheticism, tongue-in-cheek knowingness and commitment to satire and parody, Teevan and Jamie Lloyd transform a classic text – one whose archaic modes of expression make it highly unrealistic to expect a modern audience to fully understand and appreciate its content – into a biting embodiment of our age. If it wishes to continue engaging contemporary audiences, it is essential that theatre can react to its surroundings. Dr Faustus is the kind of youthful, courageous production that can achieve this – and traditionalists must allow them the space.

Dr Faustus is running at Duke of York’s Theatre until the 25th June.