The History Of Highclere Castle, England 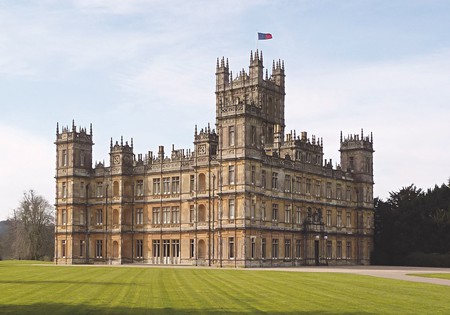 Prodigiously standing with its head high in the sky, Highclere Castle – ‘the real Downton Abbey’ – is the quintessentially British historic castle. Highclere Castle, which projects its presence over 5000 acres of land and 1000 acres of heavenly gardens, has become a global phenomenon following the hugely successful television series Downton Abbey, produced by Lord Julian Fellowes.

Back To The Beginning: 8th – 16th Century

The ancestry of Highclere in Newbury, England, can be traced back to the 8th century through the landscape and its early written records. An Iron Age Hill Fort dominating the southern landscape at Highclere, alongside an early Anglo-Saxon charter — dated 749AD — records the existence of buildings around the present site of the castle. The castle later became a medieval palace built during the twelfth and thirteenth century that was later succeeded by a much admired red brick Tudor house. This was until it was renovated in the 17th century by the new occupier, Robert Dormer, an aristocrat and the 1st Earl of Carnarvon. His descendants still live at the castle. 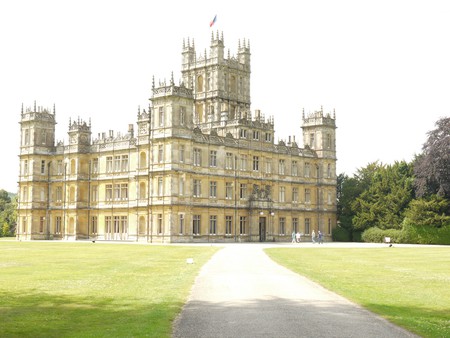 The Creation of Highclere Castle

Benjamin Disraeli once said of Highclere Castle: “How scenical! How scenical!” The architecture of Highclere Castle was carefully crafted to impress the world. Britain was in the limelight of the world’s news, as the young Queen Victoria had just ascended to the throne. Embracing this new political innovation, the Carnarvons made a dramatic change to the castle to capture its own status. The Carnarvons employed the best known English architect, Sir Charles Barry FRS RA, famously known for his role in the rebuilding of the Palace of Westminster in London in the 17th century. Four centuries later, today you can gain an insight into Sir Barry’s architectural talent by visiting the castle. His design of the classical Georgian style frontage is picturesque and harmonises with the pleasant pastoral landscape. 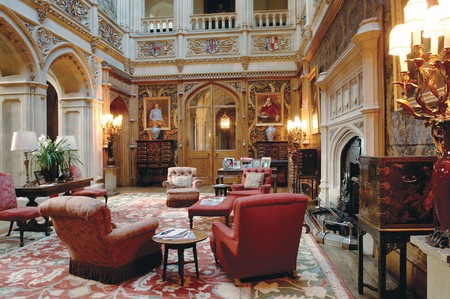 Impressively the family of Carnarvon have, through rich and poor, held a strong determination to keep ownership of the castle. The story of the Carnarvons is a fascinating tale and an endearing one that boasts a British culture of over 300 years. For centuries, since the 1st Earl Highclere has been the real-life home of an aristocratic family, who have entertained Kings and Queens of England along with a host of nobility and celebrities. The Carnarvons could have abandoned their castle several times after incurring huge debts, but luck has always seemed to prevail thanks to their belief and determination to keep the castle in the family blood through thick or thin. 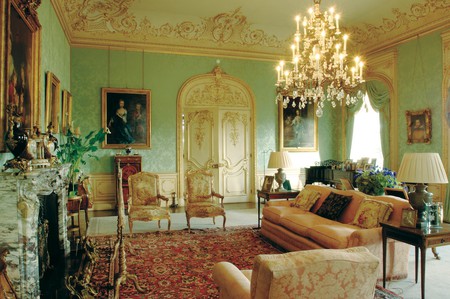 The Lavish Lifestyle of the Carnarvons

The Carnarvons have lived an interesting and privileged life. This is particularly true in the Edwardian times of George Herbert (1842 – 1918) the 5th Earl of Carnarvon. Just as Lord Julian Fellowes portrays in Downton Abbey, Highclere employed more than 25 domestic servants including daily cleaners and kitchen staff. It is quite clear that George Herbert’s over-expenditure on a lavish lifestyle meant that he landed himself hugely in debt and almost lost the Carnarvons’ beloved castle. In the 19th century it was very common for owners of British manor houses – deemed ‘land rich,’ but ‘cash poor,’ – to be forced to sell their homes that had once stood proud for centuries.

However, in typical Carnarvon fashion, luck brought him money which fell in his lap. Baron Alfred de Rothschild, of the famous family of Rothschild Bankers, and new money maker, made an offer that the 5th Earl could not refuse. In 1895, Alfred de Rothschild proffered his illegitimate daughter, Almina Victoria Maria Alexandra Wombwell, in an arranged marriage for £150,000. The Rothschilds, you could argue, saved the Carnarvons from losing their heritage castle – in the first instance, it cleared all Carnarvon’s outstanding debts. Secondly, Almina brought an additional £500,000 of inheritance to buy into the upper class High Society. What was there to lose? The 5th Earl regained his aristocratic reputation and the Rothschilds, formerly from Frankfurt, got a foot in the door in the High Upper Class English society. Simple – tit for tat! More similar stories of luck playing an integral part in the lives of the Carnarvons are discussed in Lady Carnarvon’s books telling the history of the castle: King Tutankhamun’s tomb with Howard Carter in 1922; The New York Times Bestseller Lady Almina; and the Real Downton Abbey: The Lost Legacy of Highclere. 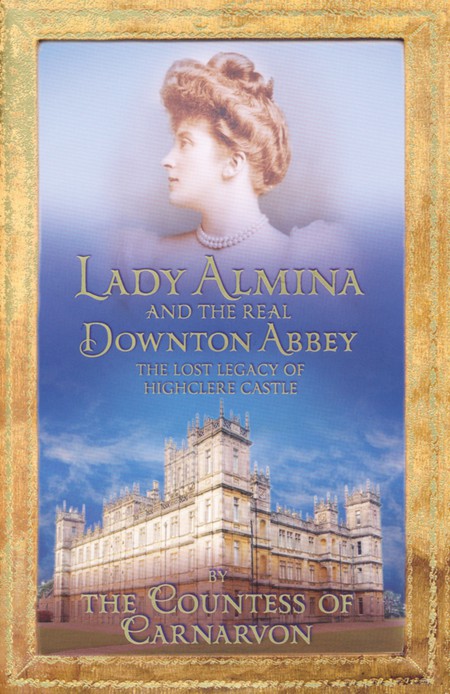 You might wonder what the 5th Earl did with the 500,000 pounds. Well, the money opened up a phenomenal idea – the Earl became fixated on Egyptology, and found an equal enthusiastic, Howard Carter. Carter, a keen amateur archaeologist, sailed to Egypt with the Earl in 1907 in search of Tutankhamun’s tomb. It’s doubtful that either of them expected the operation would last more than 16 years. Sadly, it took the Earl’s life in Cairo in 1923, where he died from blood poisoning (progressing to pneumonia) after accidentally shaving a mosquito bite infected with erysipelas – some people believe that this was a curse for attempting to wake the dead King. 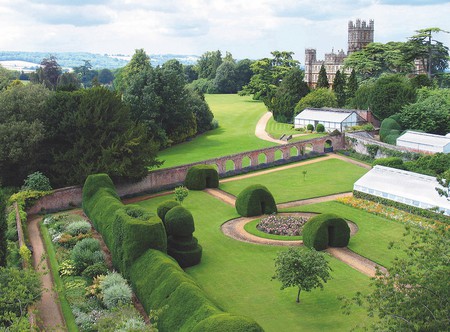 Today, the castle’s gardens are a must see – designed by Capability Brown, the best known 18th century master designer of landscapes on a grand scale. Brown’s view was that a great house should be surrounded by nature and must offer a natural feel to the senses and endless scope. The nation loved him for his vision: he became responsible for 170 gardens for England’s aristocrats and Highclere was one of them. There are guided tours which are organised to take you to see the view of the open parklands and its secret gardens. If Capability Brown were alive today, he would be honoured to see so many admirers of his works and vision. 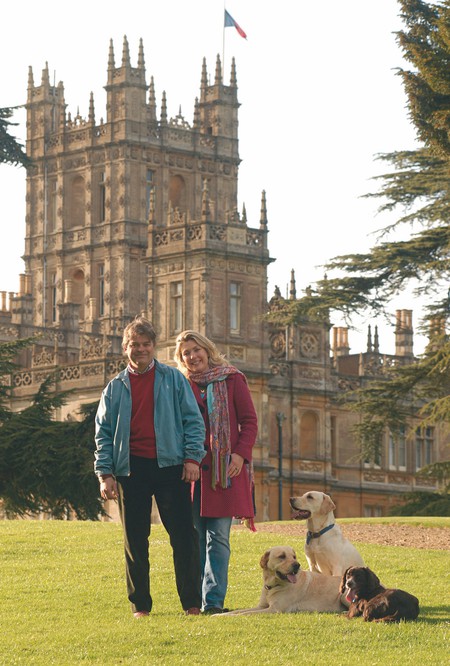 The Carnarvons’ Future At Highclere

The present 8th Earl, George Reginald Oliver Molyneux Herbert — the godson of our Queen Elizabeth II — and his wife, countess Fiona Carnarvon, might be considered semi-aristocrats. With their feet firmly on the ground, they are determined to hold on to the heritage of Highclere. Both the Earl and the Countess are active in the running of the castle — they are warm and personable people overseeing its splendid grounds and taking care of the castle’s spendings. They have managed to restore the castle’s spectacular appeal by procuring a deal with the period drama series of Downton Abbey to hire Highclere at ‘£1 million an hour’. 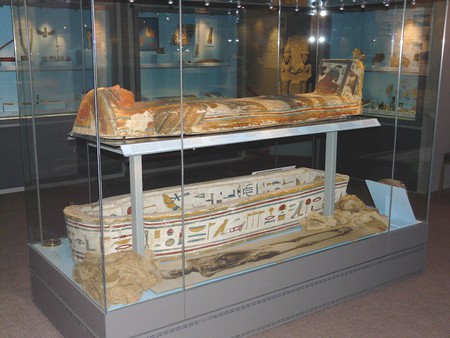 Looking Ahead At Highclere

The series Downton Abbey has created an exciting place to visit for tourists worldwide. It’s also an exciting time for Lord and Lady Carnarvon as they are looking forward to receiving you and transporting you back to the thrilling and alluring world of the real Downton Abbey. The exhibition of Tutankhamun’s Tomb and other wonderful artefacts are also on display in the castle’s cellar. Outside, the landscape of secret gardens, the woodland grounds, and awe-inspiring views are somewhat mysterious and peaceful — ensuring that Highclere truly remains an English Arcadia.