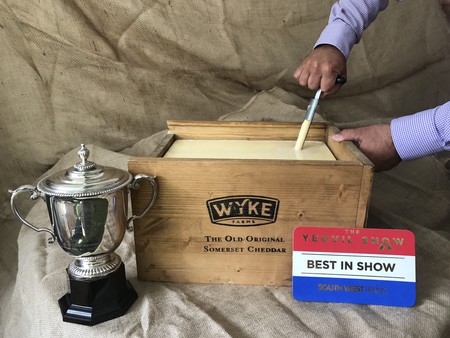 Have you seen this cheese? | © Wykes Farm

Thieves have stolen two blocks of cheese, each weighing 20kg, from the annual Yeovil Show. The cheddar cheeses, made by Wyke Farms in Bruton, Somerset, had scooped the champion and reserve champion prizes in judging during the day and were due to go on display to the public the next day.

Our award-winning Cheddar was stolen @YeovilShow. Can you help ensure it's safely returned for a £500 reward? https://t.co/GyTu6LcLkT pic.twitter.com/lyjRGxWTX2

Rich Clothier, MD of Wyke Farms was quoted in the Guardian saying that the cheeses may have been stolen to order, and that they could already be smuggled abroad. ‘They left all the other cheeses and just took ours,’ he said. The cheeses, which have a retail value of over £800, took over 16 months to make. A reward of £500 has been offered for any information.

According to a 2011 report from the Centre for Retail Research, cheese is the most commonly stolen food from shops. But the Yeovil cheddar heist is just the latest in a long line of food crimes. In October 2013, thieves stole 6,400 cans of Heinz baked beans from a lorry in Cookhill, near Worcester. In the same year, around 6,875 jars of Nutella with a street value of over £13,000 were stolen from a lorry in Germany.

And as the food gets posher, the amounts get a lot bigger. Take 2005’s case of the missing caviar, in which thieves stole 845 cans of the luxury fish eggs with a retail value back then of US$470,000. Top prize, however, has to go to the suspected ‘inside job’ done on royal vintners, Berry Bros & Rudd, who in 2015 lost vintage wines with a total value of £1.5m.

Fighting back are law enforcement agencies such as the Italian police, who earlier this year launched ‘Operation Wine and Cheese’ and busted a gang of gourmet crooks specialising in fine food thefts of such delicacies as Parmesan cheese and fine wines; 10 people were arrested.