The Best Books by Neil Gaiman You Should Read

When asked about his inspirations, Neil Gaiman, a writer famed for his British fantasy fiction, comic books, and graphic novels, said: “There is magic waiting and you can find it. You just have to go and look for it”. It’s a thought that both inspires and evokes curiosity, and is clear to see informed the best works of Gaiman himself; books at once thought-provoking, mind-boggling, brilliant and absurd. 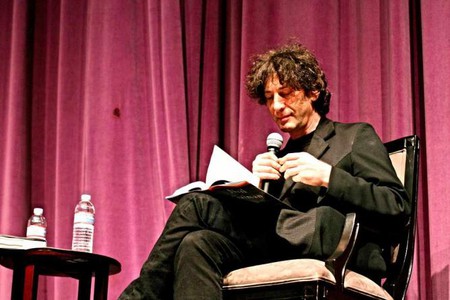 Gaiman’s most famous and influential novel, American Gods, combines elements of an original cultural analysis of America’s identity and an urban fantasy. It gives readers a deep insight into how the beliefs of the Americans have changed, both because of the immigration process and the development of technology. Mythological creatures – the titular Gods – exist only because people believe in them, and together with their practices and values change the gods they believe in to suit their needs and desires. Today, the New American Gods – modern technology, means of transportation, and the like – need to win over the Old American Gods, brought to the country with the influx of its original immigrants. In an interview, Gaiman called American Gods a “celebration of the stuff you wouldn’t think about”, and indeed, this book, albeit a fantasy, will most probably change readers’ views on the legitimacy of their own beliefs and habits.

The story told in Neverwhere, Gaiman’s second novel, was first created as a TV series by the BBC under the same title. The novel is set in London and for the most part takes place in the “London Below” – the tube stations beneath the city’s surface. Neverwhere is considered by Gaiman’s fans to be his weirdest and most mysterious novel, complete with the best-crafted villains to boot. What’s more, if reader’s liked the cultural commentaries and cutting societal undercurrents of American Gods, they are sure to like this totemic work too. Just as American Gods works to alter the way people think of the US, so does Neverwhere with London, in a sort of Orwellian, Down and Out kind of way.

“There was once a young man who wished to gain his Heart’s Desire”, begins Gaiman’s novel Stardust. As is already visible from that opening sentence, Stardust is the writer’s take on the fairytale genre. The book is set in the town of Wall, where a wall separates a relatively normal town from a magical world. The engaging fairytale begins when a young boy promises the love of his life to bring her a fallen star, which he sees falling on the magical side of the wall. The adventures that ensue in the protagonist’s quest to achieve his romantic goal are fabulous and fantastical in the extreme; a fine way for older readers to rediscover that childish glee for all things magic and fantasy.

Similarly to Stardust, The Graveyard Book can be read by adults and teenagers alike. It tells a story of a young boy who was raised in a graveyard by a vampire and ghosts. Nobody Owens, the book’s curiously named main character, needs to learn about the meaning of his own life and life in general, whilst living among the dead. When he becomes 12, he learns about the reason he’s been living in the graveyard his whole life and realizes what he needs to do to change things.

Odd and the Frost Giants is one of Gaiman’s best childrens’ fantasy books. The novel features Odd, a Norse boy who, after having been abandoned by his parents, embarks on a journey during which he meets an eagle, a bear and a fox. Soon the animals turn out to be cursed Nordic gods. Odd attempts to outwit the Frost Giants who cursed his animal friends. The book tells a story of courage and adventures whilst teaching its younger readers about mythology and history – especially of the Scandinavian variety!