The 13 Most Unusual Festivals In The World 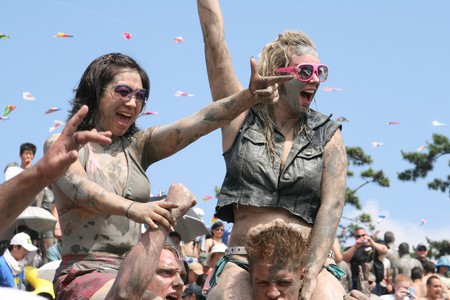 Some annual festivals emerge out of religious rituals or cultural events, while others come about because of marketing experiments or boredom. Here are the festivals that might make you scratch your head.

Wife carrying, or eukonkanto in Finnish, originated as a sport in Sonkajärvi, Finland, in 1992. The exact origins of the tradition are unknown, but each story has something to do with theft. Today, wife carrying is practiced around the world. Participants are allowed to carry their wives in a variety of ways — including piggyback, fireman’s carry or Estonian-style, where the wife hangs upside-down with her legs around her husband’s shoulders. They carry her across a 253.5-meter track riddled with obstacles. The prize is awarded based on the wife’s weight in beer. 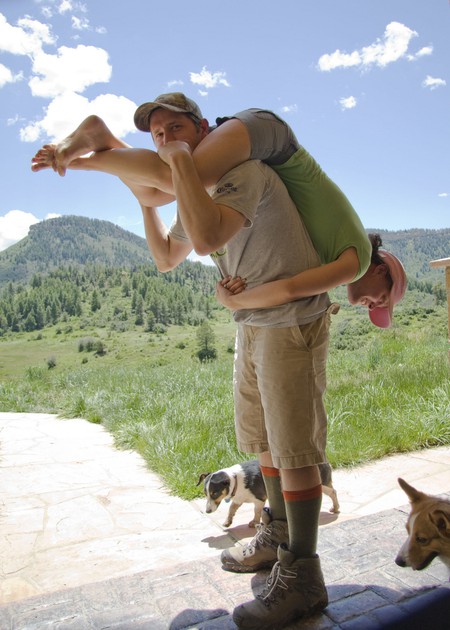 Known to the Spanish locals as El Colacho, this festival happens 60 days after Easter during the feast of Corpus Christi. The Baby Jumping Festival is a baptismal ceremony wherein babies who were born over the last year are absolved of sin. The religious custom dates back to the early 1600s. Men dressed in traditional “devilish” clothing terrorize the crowd before running down the street and jumping over the babies who have been carefully laid out on pillows. No injuries have been reported, but the Catholic higher-ups frown upon the ritual. 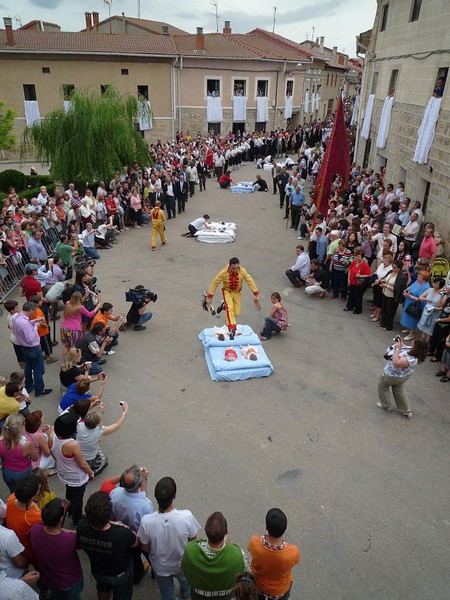 Every year on a cool day at the end of May, grown adults gather in the village of Brockworth to chase a rolling nine-pound wheel of Double Gloucester cheese down a steep hill. Before the race down Cooper’s Hill begins, the fences are removed, the undergrowth is cut and the site is swept through for stones and other dangerous objects, but the race is still dangerous for competitors and spectators. Over the years, many have been seriously injured due to the steepness and unevenness of the hill and the bulk and speed of the cheese itself. This led to a loss of official management in 2010. But the locals are hugely proud of their traditional event, and it carries on today unmanaged. In 2015, around 4,000 people came to watch the spectacle. 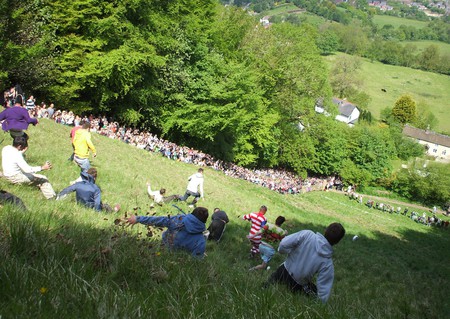 Located up in the frigid province of Yukon, Canada, the International Hair Freezing Contest is a fun winter celebration that occurs every February at the Takhini Hot Pools. Participants in the contest dunk their heads in the hot water of the pools and then create frosty hairdos by shaping their locks as they freeze in the cold air above. Temperatures in the area can reach below -30° Celsius, or -22° Fahrenheit, at the time of the contest. Winners receive a small cash prize. 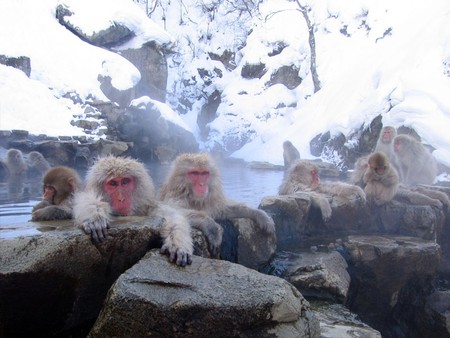 Macaques in a hot spring | © Yosemite/WikiCommons

Before you start to consider how a monkey would taste, this is a buffet for monkeys. The local monkey population of around 2,000-3,000 in the Lopburi Province north of Bangkok is gifted with a feast of 4,000 kilograms of fruits, vegetables, cakes, and candies every November. After the monkeys are given their treat, youths dressed up as monkeys perform dances. The festival first occurred in 1989, run by a local businessman who thought of this unique way to drive up tourism in Lopburi. Luckily for him and the monkeys, it worked. 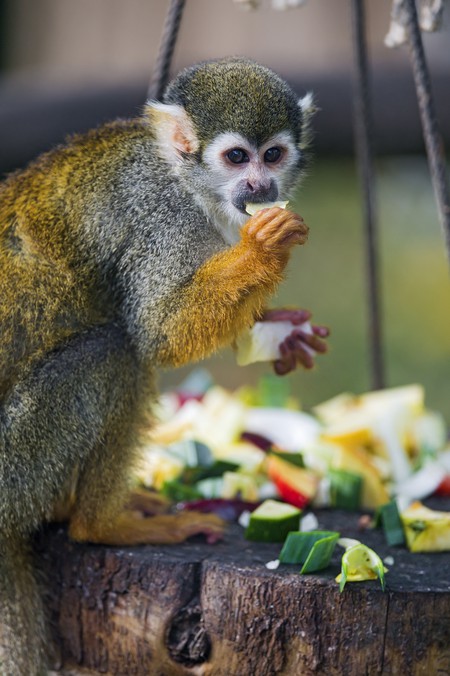 This annual festival occurs in July in the village of Boryeong, 200 kilometers south of Seoul. The festival is not historic by any means — the first one took place in 1998 — and it was originally created as a marketing event for Boryeong mud cosmetics. The mud from the Boryeong mud flats is considered rich in natural minerals and is used to make beauty products. The two-week promotional event is now popular with locals and tourists alike. Notable festivities include a mud pool, mud slides, mud prison and mud skiing.

At the end of every summer, an artistic community comes together to create and dismantle a city in the Nevada desert. Founded in 1986 in San Francisco, California, Burning Man is a mindset as well as a festival. Some of the group’s values include ‘radical’ inclusion, self-reliance, self-expression, community cooperation, decommodification and more. The community celebrates by combining all of their individual talents to create artistic sculptures, buildings, performances, art cars, and more that all participants can enjoy. The event culminates in the burning of a large wooden man, which has reached a height of 105 feet in recent years. After the event, the festival-goers aim to leave no trace of their activities by restoring the environment to exactly as it was when they arrived. 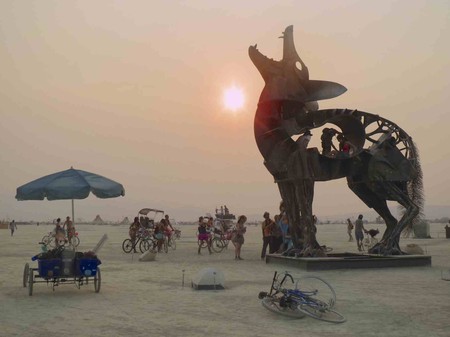 The location of the World Toe Wrestling Championships varies, but the practice originated in the village of Wetton, Staffordshire, in the 1970s. It was born out of the desire for the UK to have its own championship in some type of sport. Just like arm wrestling, two people go up against one another in each match, which is won by the best of three. Players can only take part in the tournament after a thorough toe examination by a qualified nurse. 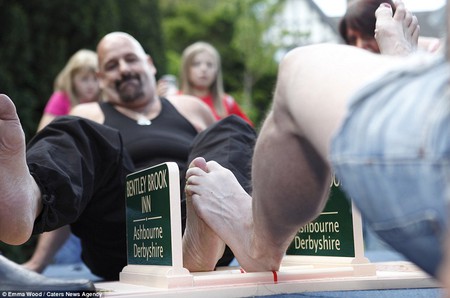 The Spanish Tomato Festival has run annually in August during a weeklong celebration in Buñol since 1945, when a rowdy crowd took the tomatoes from a vegetable stall and started a food fight. The hour-long tomato fight used up an estimated 145,000 kg of tomatoes in 2015. Since 2013 La Tomatina has been a ticketed event to limit participants to just 20,000. Before then, up to 50,000 guests had been reportedly involved in the food fight. After an hour of free-for-all tomato tossing, trucks spray down the streets and many participants wash themselves in the pool of “los peñones.” 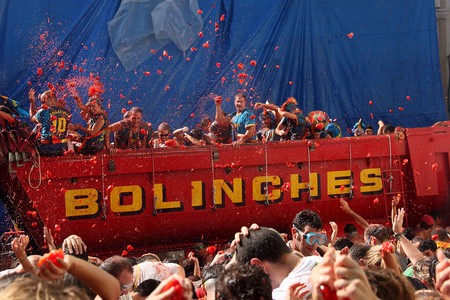 Bog snorkeling originated as a sport in Llanwrtyd Wells in 1976, and the annual August championship has been running since 1985 at Waen Rhydd bog. Armed with a snorkel and flippers, participants must complete two consecutive lengths in a 60-yard trench of water cut through a peat bog, relying only on their flippers to push them through. Hundreds travel to Wales from around the world to take part in this unusual sporting event. 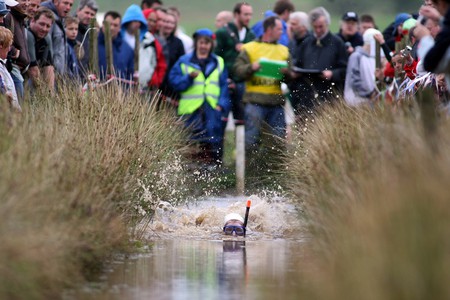 The Air Guitar World Championship has been held annually in Oulu, Finland, since 1996 as part of the Oulu Music Video Festival. What started as a joke has turned into a serious draw for the event. Participants must play air guitar on stage in two rounds with each lasting at least one minute (one song is chosen by the participant and one by the organizer), they must play air guitar only (no drums, piano, etc.) and are scored out of 6.0. The ideology behind the event is a simple one: ‘Wars would end and all the bad things would go away if everyone just played air guitar.’ 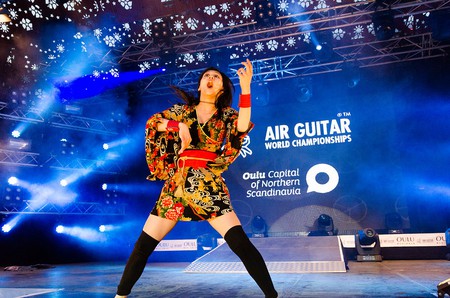 During this traditional Chinese festival, participants historically raced up a tower of buns to grab the highest bun, which would bring them the best fortune. The annual festival dates back to the 18th century and marks the eighth day of the fourth month in the Chinese calendar, which coincides with the celebration of Buddha’s birthday. The event’s official bun supplier, Kwok Kam Kee, makes more than 60,000 buns for the bun festival. The centerpieces of the event are three 60-foot bamboo towers covered in buns, which, at today’s festivals, are scaled by three trained men. 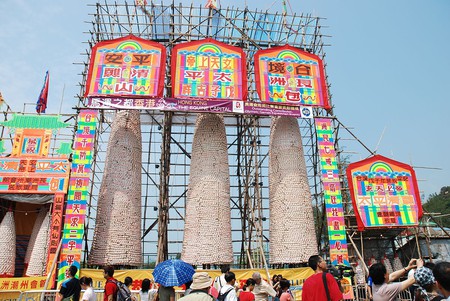 Located in the Florida Keys in the United States’ only living coral barrier reef, the Underwater Music Festival has been running for 31 years. A local radio station sponsors the event to promote environmental sustainability and responsible diving, and they play their sea-themed music underwater through speakers that are suspended under boats situated above the reef. Participants are encouraged to wear costumes and play “underwater instruments” to compete for prizes. 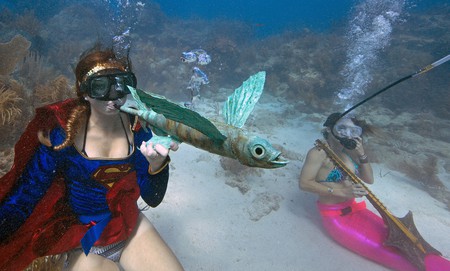