Why Post-Brexit Britain Should Enjoy Eurovision 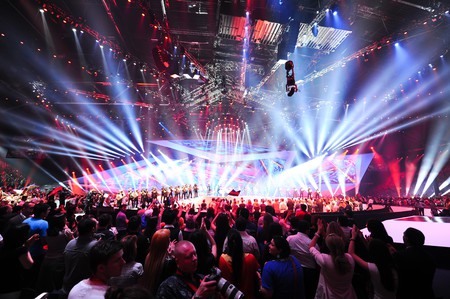 Member states of the continent coming together, all with the same goal, while the United Kingdom joins in utter reluctance, disdainfully peering down its nose and muttering that it’s better than all of this. Sound familiar? At least we’re still in the Eurovision Song Contest…

When the UK last won the Eurovision Song Contest in 1997, Katrina and the Waves sang ‘Light up the magic for every boy and girl, Let our love shine a light in every corner of the world‘ – which is a sentiment that the UK can firmly get behind in 2017… assuming ‘every’ means the exact opposite, and the ‘corner of the world’ actually ends at the picket fence at the bottom of a middle-England garden in the correct side of suburbia, just after the rhododendrons that placed third in the village fete.

Since 1956, Europe has come together every year for this event. It was supposed to be light entertainment’s contribution to uniting war-torn Europe. Laughing as a presenter in Vienna stalls during their huge international moment simply because there’s a delay in their earpiece has become so common it borders the cliché, but the contest was also originally seen as a type of live television experimenting on a grander scale. Why mock the ambition?

For a long time, the UK was happy to contribute. Sandie Shaw, Lulu, and Sir Cliff Richard all flew the flag with varying degrees of success, but somewhere along the way – around the time of Jemini’s Cry Baby, probably – the UK decided that it didn’t care about Eurovision. The only problem was that the rest of Europe decided long before that it wasn’t going to indulge the UK and its pretentiousness. Can you look down upon something you’re terrible at? Is there such thing as a superiority complex?

Eurovision, along with the trashy glitz, has at times been a platform for political statement and protest. Who knows, five years from now the powers that be might send a well-written piece of performance pop that invites Europe to rally around our own welfare state, just before Theresa May sells the final piece of the NHS to American investment – rather than a slightly worrying brother-sister combo of Butlins alumni screeching out Andrew Lloyd Webber’s lyrics without the aid of much-needed (yet questionable) auto-tune.

Amid all the sequins and hairspray, the entire competition is charged with political agendas. Last year, Ukraine were victorious with a song about deportation of Crimean Tatars. The flags of Palestine, Wales, Scotland and the Basque Country are all banned inside the venue. Russia, unlike the UK, cares about winning, but given its disturbing anti-gay laws, has been booed and jeered by recent crowds, yet still regularly receives top marks from Estonia, Belarus, Lithuania and Armenia. The UK plods along, sending acts it doesn’t believe are any good, to a competition it doesn’t believe it can win – but would like to win… but says it hates when it doesn’t win.

And so, with the repetitive, metronomic thud of disappointment that only a 30-year-old marriage’s sex life could rival, the UK continues to wheeze their way to some sort of a performance, knowing full well it won’t provide any sense of gratification, all the while thinking: “It never used to be like this, did it?” Negotiating whether the exit is hard or soft isn’t even up for debate. All the while, an act full of gorgeous Latin desire, eastern European muscle or en-vogue Scandi style romps to victory, lights a cigarette and sends out a message of peace/love/acceptance (delete as appropriate).

The UK never wins, so when we don’t win this year, maybe let’s not whine and deride ourselves like it’s a big shock – it’s not a disaster. It’s not as if we’ve signed away our economic future – like say, in a misinformed referendum whereby we moved back half a century to a life of isolation and misguided nostalgia. That bit we’ve already got covered. This, however, we can learn to love again. Then it might be reciprocated. Mutual love and respect, imagine that.