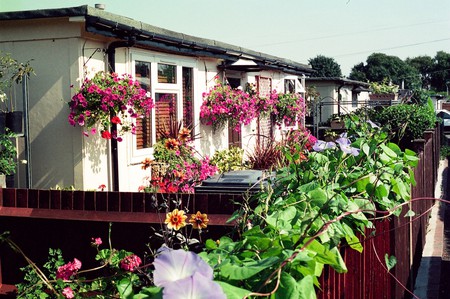 New book Prefabs: A Social and Architectural History reveals the impact the humble prefab home had on post-war Britain. Co-author Elisabeth Blanchet tells Culture Trip why these temporary houses have a legacy beyond their years, as many residents fight to hold onto their cherished homes.

They were supposed to last just 10 years, but more than 70 years on, many of Britain’s prefabs are still standing, much loved and lived in. These factory-made temporary homes were constructed at the close of World War II, with more than 156,000 erected from 1946-1948 all over the UK to rehouse those who had lost their homes during the Blitz and servicemen coming back from the frontline. 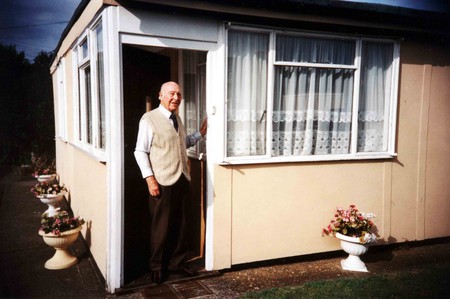 A few months after my first prefabs' visit in Peckham, I discovered the Excalibur Estate in Catford, an estate of 186 post-war 'uni-secos' to be precise. Possibly the largest remaining one in the UK. There was a holiday feel to it: the uniformity of the bungalows, the little streets and alleys, the low rise skyline and the cute gardens surrounding each prefab. Surprise was my first reaction. How could there still be there, all of them, in a sort of unity? Then I felt moved, touched by the strong sense of community they had probably help create. I knew I was going to become an Excalibur Estate regular, which I am still, more than a decade later... Eddie O'Mahony when I first met him in 2002. Born in 1920, Eddie is the oldest resident in the estate. After being demobbed and returning from Singapore in 1946, he found a bombed-out home and nowhere for his young wife Ellen and their little son to live. At first he wasnít sure he wanted to live in a prefab but Ellen, who was used to outdoor toilets and no plumbing, immediately loved the prefabís mod cons: a refrigerator, gas stove and lovely garden. Eddie has cared lovingly for his home and even bought it in the early 90s. He has kept many of its original features and proudly says: 'I love my prefab. I wouldn't swap it for Buckingham Palace, even if it included the Queen'. | © Elisabeth Blanchet

“I wouldn’t swap my prefab for Buckingham Palace, even if it included the Queen,” prefab owner Eddie O’Mahony used to say. O’Mahony had lived in his South London prefab on the Excalibur Estate in Catford from 1946 until his death in 2015 and nobody could have made him move out of his “little castle”.

“They were luxury,” he said, “we had constant running water, inside toilets, a fridge, a hall where there was space for a pram and even a hot towel rail in the bathroom.” The homes were also detached, which was quite a novelty for people who were used to living in old tenement blocks or Victorian terraces, sometimes with other family members squeezed into just one or two rooms, with toilets outside and no running water. 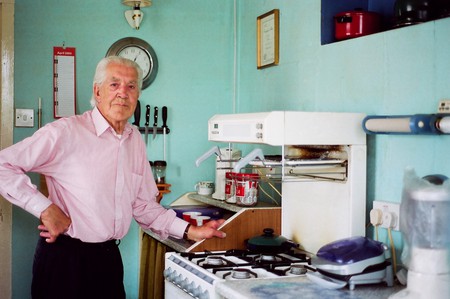 Adding to the luxury, each prefab had its very own garden. “Because of the lack of cars, we were free to roam all over the estate,” recalls Alan Brine, who grew up on the Excalibur Estate in the 1950s. “All the kids played games. We had a large mosquito net that we used as a tent in the garden and we had sleepovers – security was never an issue.” Gardens also had a practical use. As rationing lasted until 1954, owners used their gardens to grow all sorts of fruits and vegetables. Slowly society changed and gardening evolved into a community hobby rather than a necessity. The estate layouts, with footpaths, alleys and low fences, were ideal for peering over at the neighbours’ efforts and arousing a healthy sense of competition. Gardens were a source of pride, with the best layouts and ornamental flower beds garnering prizes – O’Mahony was the happy winner of a few of them. 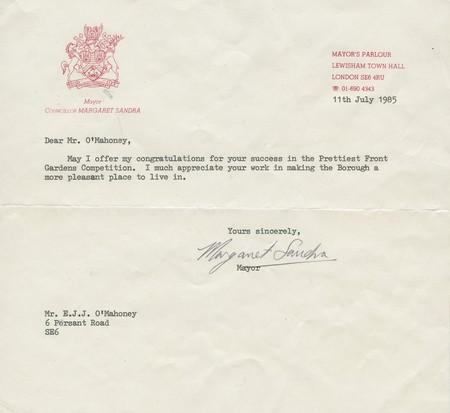 Prefabs enabled a new way of life with all the mod cons, and embodied what architects call “good design” – in essence, a clever and efficient use of space. They usually comprised a comfortable single-storey bungalow with two bedrooms, inside toilets, constant hot water, a fitted kitchen with a fridge and a cooker, built-in cupboards in every room, large windows, a coal fire and, for some of them, a coal shed outside.

Given the amount of effort poured into the design, perhaps this shouldn’t come as a surprise. Prefabs had their genesis in a design committee created by the wartime government as early as 1942 to research other prefab designs across the globe. The committee was mainly inspired by the Tennessee Valley Authority’s dismantable Norris Houses – “truckable” trailer homes made as part of US president Franklin D Roosevelt’s New Deal – which led them to produce a blueprint of the ideal prefab house. A competition was launched in 1943 among potential manufacturers, and 11 types were selected, all based on the same blueprint but comprising different materials and subtle design differences, such as flat roofs versus pitched designs, or timber-framed with walls made of asbestos-cement panels compared to those made with surplus aluminium from munitions factories. 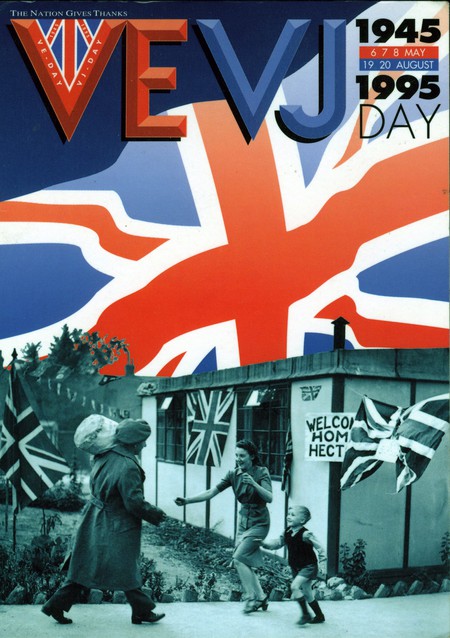 The government was so keen on making the Temporary Housing Programme a success that prime minister Winston Churchill himself promoted the prefabs in a speech made in March 1944. “The first attack must evidently be made upon houses which are damaged, but which can be reconditioned into proper dwellings … The second attack on the housing problem will be made by what are called the prefabricated, or emergency, houses.” 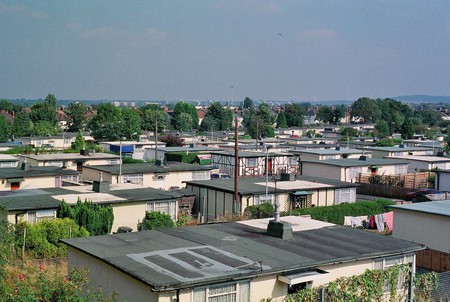 The government feared for the country’s social cohesion. Housing people well would be vital to getting Britain, reeling from damage caused by World War II, back on its feet. To mitigate the negative connotations attached to prefabs, exhibitions showcasing various models were displayed outside the Tate Gallery in London to convince people prefabs were not simply “improved Nissen huts” – the half-cylindrical corrugated military shelters. 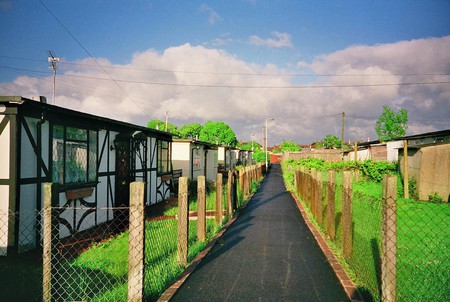 The Excalibur estate in 2004 | © Elisabeth Blanchet

As a result of inflation and some unexpected costs, ‘only’ 156,000 prefab houses were built in the UK, predominantly in cities and towns that had been heavily bombed during the war. They were supposed to have a lifespan of 10 to 15 years but many have survived much longer. Ultimately, they functioned as social housing and after 1948 became properties of local authorities, each of them dealing with prefabs in their own way. Some demolished them straight away, while others kept the houses and even renovated them to get them up to modern living standards. Ironically, prime minister Margaret Thatcher’s Right to Buy scheme also helped save the temporary structures as it allowed prefab dwellers to buy their homes. This is what Eddie did in the early 1990s in order to continue his and other Excalibur residents’ fight to save the estate from demolition and regeneration. The land the estate sits on is now worth millions and is highly sought-after by local authorities and property developers. 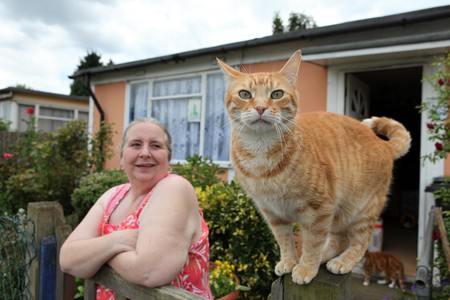 So what makes these humble homes worth saving? These “palaces of the people”, capture a certain period in British history and are material evidence of strategic thinking in a time of need, original design and a real provision of care for the people of Britain.

To find out more about prefabs, read Elisabeth Blanchet and Sonia Zhuravlyova’s book Prefabs: A Social and Architectural History, published by Historic England, £20.