Lovesick's Daniel Ings: 'Luke and Dylan's Bromance Is About the Bum Slapping' 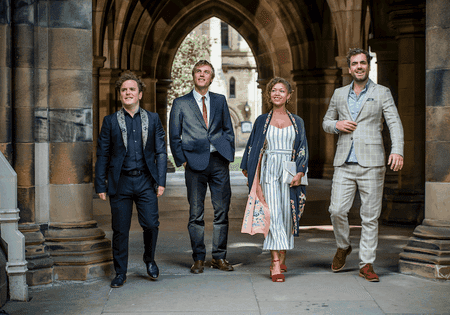 Daniel Ings is thinking hard about what the best piece of advice he’s ever been given about love is.

Brow furrowed, wearing a navy jumper and rocking a salt-and-pepper beard, he has the look of a handsome, grizzled fisherman.

Finally, he’s got it.

‘Someone very close to me once said that you should fit, not match,’ he says. ‘That always stayed with me. You don’t have to be the same, you just have to work together.’

That’s certainly true of his show Lovesick – it’s the differences between the four main characters on Netflix’s comedy that make it so watchable.

If you haven’t been watching Lovesick, you’ve been missing out on one of the best British TV romcoms ever made. 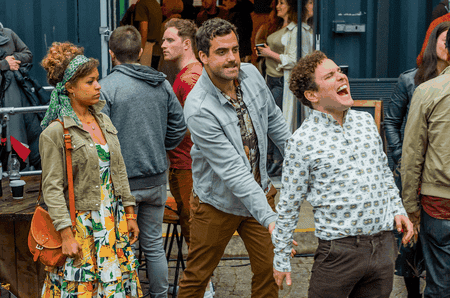 The series, originally on Channel 4, started off as a show with the puerile name of Scrotal Recall about a man, Dylan, tracking down all his exes with the help of his friends to tell them he has chlamydia.

But despite the gimmicky premise, it has evolved into a show about relationships, the messiness of love and the difficulty of true intimacy, which is astute and heartwarming. Not to mention funny. It’s often laugh-out-loud hilarious. Plus, it has a ‘will they, won’t they?’ relationship between Dylan and Evie to rival that of Ross and Rachel’s.

Reflecting on the show’s loyal fanbase, Ings says: ‘It’s so honest, it’s fun, it’s silly and doesn’t take itself too seriously but it does lay bare some of the more awkward experiences we all go through when we’re trying to find the one. So much about the writing, so much about the characters is so relatable regardless of your own age and your own circumstances.’

Over three seasons (the newest having been released earlier this month on the streaming service), the show explored the touching bond between four friends as they fumbled their way through dates, hook ups, failed proposals, relationships and even one marriage.

Series three saw Dylan and Evie, who have been secretly in love with each other for years, finally get together. It hasn’t been an easy path though – the main obstacle to their romance has been plain old bad timing. At the end of the second series, Evie ditched her fiancé Mal (Richard Thomson) hoping to reveal her true feelings to Dylan, only for him to declare his love for girlfriend Abigail (Hannah Britland). Love rival though she may be, Hannah’s character isn’t as easily disposable as this genre demands. It says a lot about the show that she’s genuinely likeable and, even when you’ve been rooting for the best friends to sort it out, it’s heartbreaking too to see her crushed in the process.

‘In terms of a resolution, it’s not a crystal clear walking into the sunset kind of thing but dealing with two people who are obviously in love but can’t get it together, you can only take it so far before it gets frustrating,’ Ings says of Dylan and Evie. ‘I thought it was a really interesting direction to take those characters and that story.’

Will they make it as couple though?

Ings take a deep breath and pauses. ‘Yeah, sure,’ he laughs. ‘Well, I’m a romantic at heart. I do think relationships and monogamy are difficult and hard, sometimes antithetical to human nature, but I believe against all odds it can be brilliant. I feel quite invested in those two so I think yes because I want them to.’

If you have been watching Lovesick, you’ll know that Luke has been stealing every single scene he’s in. On paper, he’s the kind of character you love to hate: a cocky lothario constantly moving on to the next woman and revelling in his lack of depth. If you met him in a bar, you’d definitely steer clear if he was trying to hit on you. But underneath it all, he’s still bruised and hurting from a brutal break-up. His character has the most interesting arc as he slowly comes to the realisation that he needs to change his behaviour to find true happiness. Ings’ charismatic performance is flawless as he hints at the vulnerability hidden deep inside while his comedy timing is bang on.

Ings, who has also starred in The Crown, Pete versus Life and Psychoville, is miles away from Luke in real life. There’s no hint of his character’s laddishness or arrogance. Instead, he talks about being in a committed relationship for 12 years, how he thought (very briefly) about naming his third child Dylan, and missing out on Tinder.

‘I remember when the show first came out on Channel 4 as Scrotal Recall. The first episode turned a lot of people off because I think they thought my character would be this two-dimensional sleaze and it was frustrating. Even in series one the writing starts to peel away at his layers.

‘I just think it’s great to take an archetype and say: “Well who made this person the way he is? What happens when he starts to realise the way he’s behaving isn’t healthy?” I love those moments of realisation in series three that the things that I’m good at are bad for me. It shows a vulnerability that people can relate to. More than someone with a load of swagger and charm who breezes through life.’

Playing Luke gives him the chance to emulate his comedy heroes Jim Carrey and Will Ferrell.

‘I’m a ham, really. I’m a big old ham. It’s great to tap into the tiny corner of my soul that still has some emotion left,’ he jokes.

Luke has undergone a massive change in this series and manages to turn a friend with benefits into a girlfriend. Kind of. He seems to have met his match with old university mate Jonesy (Yasmine Akram). She’s a ballsy Irish woman loving single life and perfectly happy to date around casually. When she tells Luke that she doesn’t believe in relationships, she actually means it. Until she changes her mind and ends up in his bed again. It’s a happy ending of sorts, although there’s a niggling feeling he might have found someone with bigger commitment issues than him.

‘I think they’ll give it a good go,’ Ings says. ‘I think series three ends on a note that they’re going to try but certainly Jonesy feels like it’s a bad idea. That being said, I’ve got friends in relationships where it just shouldn’t work at all. I’ve been in a relationship for 12 years and there have definitely been points where, if I was an outsider looking in, I’d say this doesn’t look like it’s going to work.’

Ings orginally auditioned for the show with Dustin Demri-Burns in the role of Dylan. When Dustin had to pull out over scheduling conflicts with his sketch show Cardinal Burns, Flynn stepped in. The cast bonded over meals in seafood restaurants and drunken nights out in Glasgow, where the show is shot and set. What makes the series so entertaining is the chemistry between the actors. It’s a love story not just about Dylan and Evie but about Luke and Dylan’s touching bromance and Luke’s resolutely platonic friendship with Evie, too. As his character once said: ‘Whether you like it or not we are a love triangle, with me a non-sexual participant.’

‘They’re sort of like yin and yang in a way,’ Ings says about Luke and Dylan’s relationship. ‘I guess they just love each other. They love the aspects of each other that other people find completely frustrating. They forgive each these huge faults and failings. There’s a kind of tactile affection. They love slapping each other’s butts. It’s mostly that really. It’s just the bum slapping.’

The two men are very different but seem to complement each other. ‘Opposites attract’ has never been more true than it is here. While Dylan is indecisive, highly idealistic and sensitive, Luke is confident and represses his emotions with macho posturing until the death of a former crush jolts him into the realisation that he needs to make some big changes to his life.

Ings also explains why Luke has managed to resist hitting on Evie all of these years.

‘There’s is a completely platonic relationship. What I like about my scenes with Antonia is that there is no sexual chemistry between them. I love that the writers refuse to go there. I do believe it’s possible for a heterosexual man and heterosexual woman to have a completely platonic relationship with loads of love and affection where the end game isn’t sex. I think it should stay that way.’

The end of season three seems to bring things to a natural end. The final episode shows Evie heartbroken after bumping into an old ex at a university reunion. Dylan, who normally would’ve been sent spiralling by a hiccup like this, is seen accepting the situation for what it is and – for the first time in the series – tells Evie that he loves her, showing a maturity and decisiveness we haven’t seen before. Even so, the question every fan wants to know the answer to is: will there be another series?

‘Yeah,’ Ings ponders. ‘I think there’s potentially more story to tell. I know Tom [Edge, the show’s creator and writer] feels like there’s more mileage. With this, it’s not a classic sitcom in the sense that every episode ends where it began. The characters are on a journey and their lives are changing. I hope we can give it a resolution or a complete arc. I do think the end of series three does that to a certain extent. If it ended there, I’d be proud of what we managed to do with the characters and story.’

As he said, if that was the end of Lovesick, it would still be a towering achievement. It’s like a vintage Richard Curtis movie repackaged for a millennial audience, but much more heartfelt and real. It works in the way Four Weddings and a Funeral and Notting Hill worked in that it shows the quest to find the one in the most British manner – endearing in a horribly awkward way but always charming. At the heart of it, it’s a show that recognises the imperfection in love.

‘Hopefully, it’s not too preachy,’ Ings says. ‘It just reflects back to people what they recognise about their own lives and love. I know that’s the case for me. That it’s complicated, a bit weird and sometimes a bit horrible but still worth it anyway. That the search for it is messy but you should give it a crack. That, ultimately, it’s pretty great.’