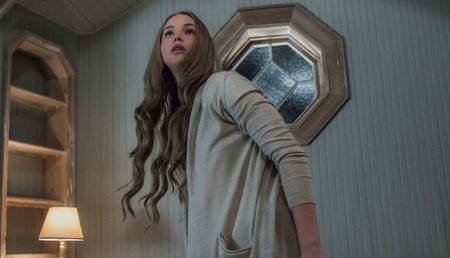 Jennifer Lawrence in mother!, from Paramount Pictures and Protozoa Pictures.

Where to start with mother!, the new Darren Aronofsky film which recently premiered at the Venice Film Festival? By now, if you haven’t read the reviews, you will at least have heard of the reactions to the film. It’s safe to say this is one of the most divisive films ever made, and having seen it ourselves, we still have almost no idea as to what it is about, or if we love it or hate it.

mother! (‘with a lowercase m and an exclamation mark’ as a very helpful PR emailed me just this morning) is going to mean different things to different people. Usually, a statement as broad as that feels like a cop out, but in this case it is not only true but clearly what the director himself wants the reaction to be.

You might then think that there is no clear narrative or thought process to the film, but that’s not even remotely true. Aronofsky has toyed with the different uses of story structure before – and this movie is no exception – but the narrative itself is actually the one of the two constants in the script (the other being Jennifer Lawrence, but more on her later).

From his blistering debut Pi (1998) we could sense that Aronofsky was a director keen to test himself and audiences. The usual chatter among critics after any screening is predictably pithy, everyone hoping to land that one-liner that will go viral or claim to have come up with a clever tagline that might go on the poster. Better still a witty putdown will get you the kudos of your peers and a few re-tweets before the film’s release.

The conversation after our press screening of mother! was that of staggered disbelief. No one would lay claim to knowing what the film was about, and only a handful would raise their heads above the parapet to give a firm opinion either way. Critics after the Venice screening were just as divided and confused, and reviews will almost certainly veer between ‘one star’ disaster territory to ‘five star’ masterpiece claims.

So what of the film’s leading lady? Jennifer Lawrence, the biggest Hollywood star of the moment, gives her best performance to date as Mother. The camera rarely shifts from her perspective, with her face at the centre of most shots. We see her mentally and physically beaten, disfigured and burned alive and yet she delivers it all in an eerily detached way. The tone of her delivery is in marked contrast to that of the other stars of the movie. Javier Bardem plays Him (the film obviously dispenses with such nonsense as character names), Mother’s famous poet husband who is going through a severe case of writer’s block in the house that he and his wife have built together. He is the attentive partner but will randomly say something that alludes to an arrogant streak and desire to be a celebrity again. 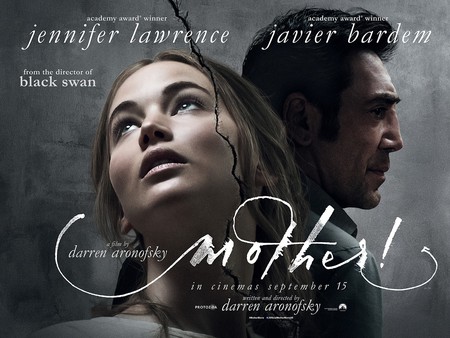 Into the confines of their home (Lawrence is never seen out of the house throughout the whole film), comes Man (Ed Harris) and Woman (Michelle Pfeiffer) as a couple who turn out to be crazed fans of Him. They also bring their family drama with them, which results in a murder, and as the blood seeps into the floorboards of the house, Mother realises there are secrets in the basement behind a sealed door.

Mother then falls pregnant and Him rediscovers his creative flair, producing a work his agent (Kristin Wiig) heralds as genius. Soon fans flock to the house, invading the sanctuary inside and destroying everything they see. In a swirl of emotion, Him is elevated to a god like status as Mother watches on as the masses turn on one another. Riot squads, soldiers and protesters launch full-blown war on one another as Mother is about to give birth. Fearful that their baby will be harmed by the hordes below, Mother holds on to the child after giving birth and refuses to hand him over to Him. When she momentarily falls asleep, however, she awakes to see the newborn taken into the crowd and consumed by the worshippers of him. She is then beaten for not forgiving them or understanding their pain before taking the drastic decision to destroy everything.

Its only in writing down some thoughts that you can truly evaluate what you have just seen. It’s a remarkable film that will no doubt divide audiences. Our own take is that its about crippling anxiety and the subsequent effect on everything around the sufferer. There is also the idea of the cost of fame on any relationship, and in this case Mother’s own fears perpetuate that. The rapid escalation from a trickle of people in her home causing her a few concerns to a full-blown war zone in her kitchen captures that sense of turmoil that an anxiety attack can cause. World events become jumbled up with more personal matters and concerns. Aronofsky is too smart to claim he understands what a woman will go through during pregnancy, but has instead used impending motherhood as a prism for universal fears. It seems obvious that the creative difficulties and subsequent adulation the poet gets is a comment on the pressures of fame and celebrity. As Mother constantly worries about sharing her partner with the outside world, it drives their relationship apart.

Oh, and for the record, we have decided we loved the film. It’s unbearable to watch at times, but make it through and you will feel like you have experienced something truly unique.

mother! is out in the UK from September 15