Is This the Most Boring Movie Ever Made? 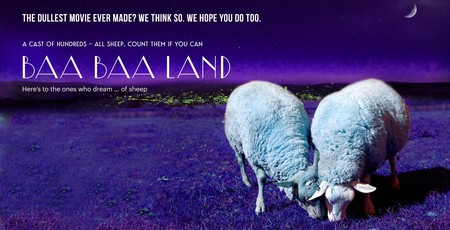 The filmmakers behind a new film have taken a bizarre stance by hoping that their latest endeavour is deemed to be the dullest ever put on the screen. The slow-motion epic, which clocks in at an eye-watering eight hours and has no plot to speak of, stars a cast of sheep and is called… Baa Baa Land (we see what they did there).

The movie is apparently set to have a premiere in September, where we assume normal security will be replaced by sheepdogs, and also be streamed online as part of a global webcast. Check out the trailer below, which has a measly runtime of 84 seconds.

Meditation app Calm have produced the movie and will be the ones hosting the online premiere. London’s Prince Charles Cinema, a stone’s throw from Leicester Square where celebrities such as George Clooney, Angelina Jolie and Brad Pitt have walked the red carpet in recent years, will apparently host the premiere in the UK.

Baa Baa Land is described as ‘Slow Cinema’ a genre noted for its long takes, gentle pacing and featuring little to no dialogue or action. Hollywood blockbusters average a new take every two seconds, whereas this movie meanders towards the 30-minute mark for each fresh scene. Sounds fun!

‘It’s better than any sleeping pill – the ultimate insomnia cure’, says Alex Tew, Baa Baa Land’s executive producer and co-founder of Calm. When asked if the movie is the dullest ever made, producer Peter Freedman gleefully responds, ‘We think so. We hope that audiences will too…’

Slow Cinema is nothing new. Andy Warhol once produced an eight-hour film himself, Empire in 1964, which is now considered a classic.

Baa Baa Land, however, could be considered a short film if compared to the longest film ever made… Swedish experimental art movie Logistics (2012) clocks in at 857 hours. That’s just 35 days and 17 hours of your life. What are you waiting for?!