How Athletes Cope With Fasting During Ramadan 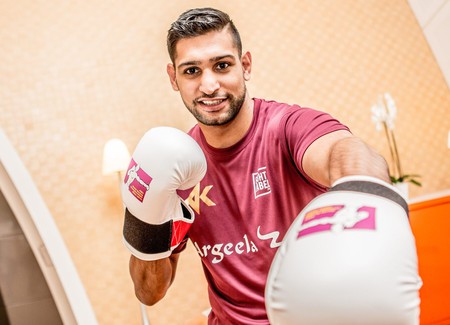 Ramadan is the holy month of fasting, introspection and prayer for followers of Islam. As the ninth month of the Islamic calendar, Ramadan is observed by Muslims — there are one billion followers globally — to commemorate the revelation of the Quran to Muhammad.

Those who observe Ramadan refrain from eating and drinking from sunrise to sunset.

While such fasting seems hard enough to the casual observer, imagine not eating or drinking anything for the majority of the day while being a professional athlete. That means no Gatorade during a workout. No pregame meal. No protein bars during a run.

“It makes you feel weak,” boxer Amir Khan told BBC Sport. “You have to wake up at 4 to eat, but you’re knackered and you don’t feel like food.”

In order to get the nutrients and energy needed throughout the day, fasting Muslim athletes are advised to eat slow-release carbohydrates like sweet potatoes and corn instead of sugar-heavy carbs that are released faster.

While most would assume a decline in performance due to fasting during Ramadan, studies have shown varied results.

According to Effects of Ramadan Fasting on Health and Performance of Athletes, “Performance during brief or very short-duration exercises is generally maintained, while single or repetitive short-term maximal or long-duration efforts are reported to be impaired during Ramadan in comparison with before Ramadan mainly when test sessions are conducted in the late afternoon just before Iftar (fast break). However, the point at which the components of performance are affected is not well established.”

Due to a lack of hydration, body mass in many athletes declines as a result of less water weight or decreased fat-free mass. Dehydration is also a concern.

“It’s still pretty uncomfortable trying to get fluids and food down when you are bloated and half asleep at 4 a.m.,” Great Britain rower Moe Sbihi told BBC Sport. “I sit down in the cold and the dark with a table full of cereal, milkshakes, pastries, flapjacks … sweet, calorie-rich food that’s great to eat once but not every morning at 4 a.m. for 30 days. It’s a big effort to force it down.”

Not all Muslims are required to fast during Ramadan. Children, people who are sick or elderly, travelers, pregnant women or those who are nursing are exempt from fasting, but are expected to make up for the missed days in the future or by helping those in need. Not all Muslim athletes fast, either. For example, Tihmina Kohistani, an Olympic sprinter from Afghanistan, abstained from fasting in 2012 because Ramadan overlapped with the 2012 Olympics in London. New York Jets defensive lineman Muhammad Wilkerson doesn’t fast due to his involvement in sports.

“It’s a dilemma for me and many Muslim athletes,” Kohistani told the Financial Times. “I train hard every day – three hours in the morning and one in the evening – and I just need the energy.”