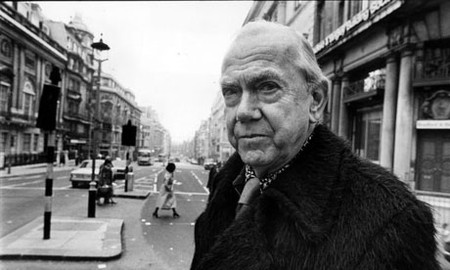 Considered one of the most influential and exciting writers of the 20th century, Graham Greene has served to entertain and inspire his readers since the publication of his first success, Stamboul Train (1932). However, due to the praise and adulation that has surrounded works such as the Four Major Catholic Works (Brighton Rock (1939), The End of the Affair (1951), The Heart of the Matter (1948), and The Power and the Glory (1940)), his other works — equal in their power and finesse — have been overshadowed as a result. The Culture Trip, therefore, presents 10 must-read alternatives to the typical Greene reading list. 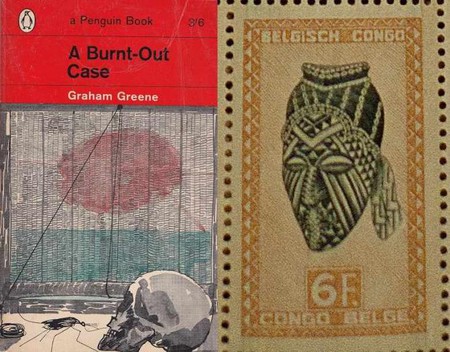 The counterpart to Greene’s other, more famous, novel set in the African continent, The Heart of the Matter (1948), A Burnt-Out Case is a moving examination of faith in its different stages of decay and regeneration. Named after the phrase used to describe lepers who have gone through all the stages of mutilation in the course of the disease, it is also an overt reference to the main character’s apathy and emptiness. Querry, the protagonist, is drained and ‘burnt-out,’ wearied by a lifetime of deceit, hypocrisy, and misplaced zeal and has lost both his faith in Catholicism and in humankind. His quiet life, helping out in a leper colony, does serve to rehabilitate him somewhat, until an unfortunate string of events leads to tragedy. Filled with cynical disillusionment and yearning hope, A Burnt-Out Case is a novel for everyone who wants to explore apathy and despair in its purest form. 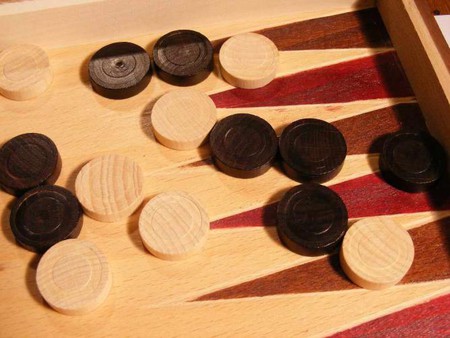 The last novel to be published in his lifetime, The Captain and the Enemy, somewhat lacks the usual finesse and tight plotting that characterizes a Greene novel. It is, however, filled with an emotional intensity that entirely eclipses its shortcomings. Starting from the unusual premise of a boy being stolen from school, and adopted by a man, only ever known as ‘the Captain,’ the whole novel follows the life of Victor Baxter, the stolen child, and his interactions with the enigmatic Captain and his Liza, as the Captain lies, bluffs, and cheats his way through life. Not only is The Captain a realistic and disturbing portrait of lies and deceit in all its ugly forms, it is also a compelling depiction of the purest, most selfless, and most profound love that has ever been crystallized into words: the love between Liza, broken and damaged, and her fiercely protective Captain. 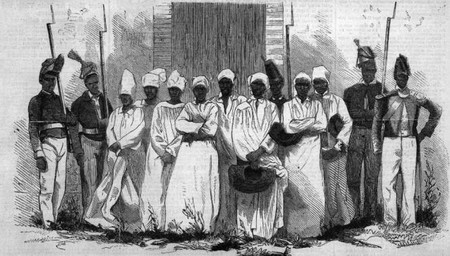 A sketch of the eight Haitian Vooodoo devotees found guilty in 1864 in the affaire de Bizoton. The theme of Voodoo and its use under Papa Doc’s regime is discussed in The Comedians | © Wikicommons

Another offering of Greene’s set in an exotic locale, The Comedians uses the political instability of Haiti in the dictatorial grip of François ‘Papa Doc’ Duvalier and the Tonton Macoute, his secret police. The story tells of three expatriates — Brown, Smith, and Jones — living in and interacting with the Haitian political atmosphere. They are the ‘comedians’ of the title, and, like their generic surnames suggest, there is a certain bland facelessness innately embedded in their characterization. With the characters come, of course, a whole host of complications, both political and personal, including insurrection, adultery, and betrayal. Through these various events, Greene provides a lens for the reader into the almost nightmarish claustrophobia of the repressive regime in Haiti during the 1950s and 60s, skillfully using a wide variety of plot devices in order to maintain an atmosphere fraught with tension and fear. 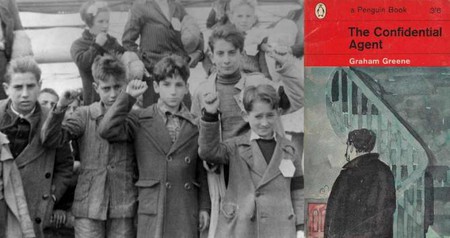 Children preparing for evacuation from Spain, during the Spanish Civil War, some giving the Republican salute. The photo is donated to Wikipedia Commons by the estate of Olga Brocca Smith and is dedicated to all innocent victims of war; The Confidential Agent book cover (1963) (right) | © Locospotter/WikiCommons; Jeremy Crawshaw on behalf of Penguin Random House Books

Another tribute to Greene’s lifelong interest in international espionage, The Confidential Agent was cited by a contemporary critic as a ‘magnificent tour-de-force,’ though Greene himself was so displeased by his work that he wished to publish it under a pseudonym. The plot traces ‘D’s’ attempts to secure a coal contract with a British businessman, an endeavor that, if successful, would significantly help the faltering loyalist cause to which D is attached. Though the details of D’s native country and the exact nature of the political instability is kept deliberately vague, the hints peppered throughout the book of a left-leaning, populist revolutionary republic embroiled in bitter faction and class wars is reminiscent of the Spanish Civil War (1936 – 1939). Ambitious in its scope and magnificent in its delivery, The Confidential Agent can certainly rival its more famous counterparts, such as The Power and the Glory (1940) and The Quiet American (1955). 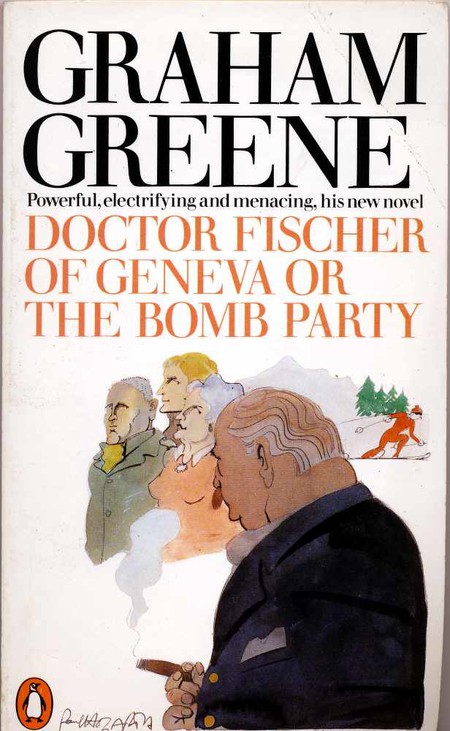 Doctor Fischer of Geneva or The Bomb Party (1980)

A powerful study of excessive greed, its plot is as explosive as its name implies. Narrated by Jones, a translator working in Switzerland, the novel relates Jones’ interactions with his father-in-law, the infamous Doctor Fischer, whose legendary dinner parties serve as psychological experiments of sorts in order to gauge the extent to which the rich would go in order to obtain more riches. The unnerving denouement of the tale is the final dinner party of Dr. Fischer, in which he provides his guests with a lottery containing checks worth two million dollars or a live bomb. He, thus, provides them with a choice – death or innumerable riches — and watches the fall-out with calm detachment as the participants grapple with the dilemma. Cited as an example of a statistical search problem, Doctor Fischer is chilling in its analysis of the frailties of the human mind and its yearning for more. 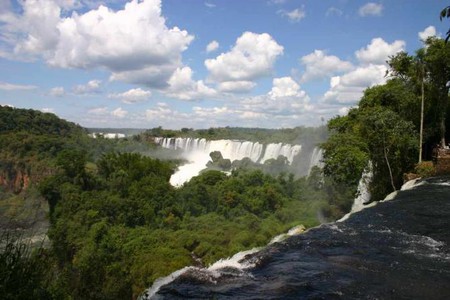 Cited by the author himself as being one of his favorites, The Honorary Consul is both tragic and farcical in turns. Set in the Argentine Littoral, its protagonist and narrator is the ever-detached and contained Dr Eduardo Plarr, whose pretensions towards detachment and control is very much undermined by his savage obsession for his friend’s wife, whom he first met as a prostitute; this friend, a self-pitying and hopeless alcoholic, is the Honorary Consul of the title. In equal parts tragic, such as when Plarr viciously reminds himself that he ‘bought’ Clara’s affections with a cheap pair of sunglasses, and comic, as when his novelist friend Saavedra waxes lyrical on the Latin American principle of Silent Machismo, The Honorary Consul is both an entertaining thriller, and a novel that explores the nuance of human emotion in times of crisis and despair. 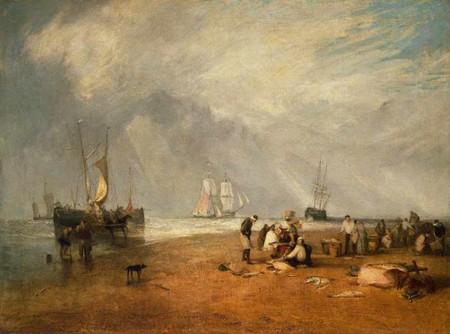 The Fish Market at Hastings. Small fishing villages were ideal for smuggling from the 13th century right up to the modern day. | © Beach Nelson-Atkins Museum of Arts/WikiCommons

The first book to be published in Greene’s oeuvre, and later called overly sentimental and romantic by the author himself, The Man Within is, despite the author’s criticisms, a powerfully raw exploration of cowardice. The story centres on Francis Andrews, the son of a famous smuggler who is increasingly angered and irritated by the constant comparison made between him and his legendary father; Andrews, through fear of his father, has also gone into smuggling. Motivated in equal parts by a corrosive hatred for his dead father, a crippling fear of the law, and an ever-present disdain for his colleagues, he commits the ultimate crime in betraying his smuggling outfit to the police. Spending the rest of the novel physically and emotionally running away from that fatal decision, The Man Within is a compelling debut that investigates human nature at its most basic. 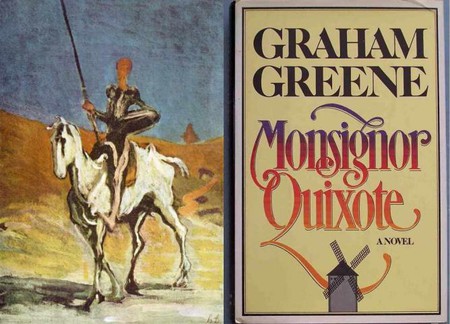 In equal parts comic and thought-provoking, Monsignor Quixote is a wonderfully ebullient celebration of the Spanish classic, Cervantes’ Don Quixote. Tracing the events of a quasi-pilgrimage taken by a Spanish priest, the eponymous Monsignor Quixote, and his ‘Sancho,’ a Communist ex-mayor of their little town, the story is a modern day ‘re-telling’ of the journey that their fictional counterparts took in the Golden Age classic. A warm and vibrant novel that is gently self-mocking and quietly thoughtful in its portrayal of post-Franco Spain, the smaller episodes that make up Quixote’s journey, such as trying to make the Holy Trinity out of three half-emptied wine bottles, the problems of buying the correct purple socks that befits Quixote’s elevated status as a Monsignor, and accidentally watching a pornographic film in the cinema, are what make the entire novel truly wonderful, inside and out. 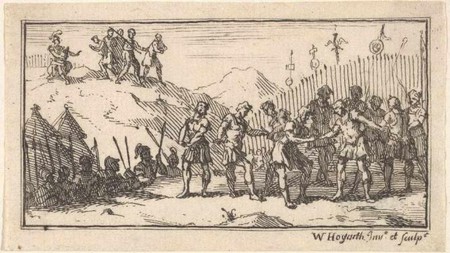 Inspired by the Roman punishment of decimation, which involves executing one man out of every group of ten as a punishment for desertion, The Tenth Man, like The Man Within, explores that crucial moment of failed nerve, and the disastrous consequences that follow. Chavel, a successful lawyer captured by the Germans during WWII, becomes that tenth man after a prison decree to that effect. In a fit of panic, Chavel offers all of his worldly goods in exchange for his life, literally buying his way out of dying, and allowing another prisoner to take his place. Unable to live with himself or with the condemnation of his fellow prisoners, the rest of the novel shows his interactions with the outside world after his monumental act of cowardice. Acutely observed, it will force the reader to think about what courage means, both personally and in the world at large. 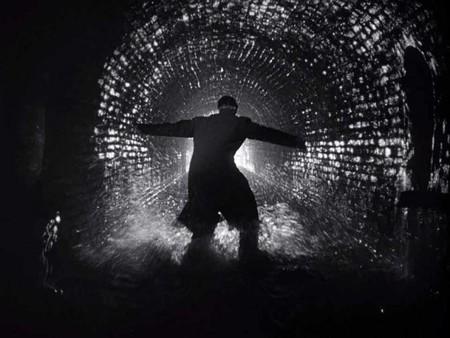 Originally written as a source text and screenplay for the critically and commercially acclaimed 1949 classic The Third Man — starring Orson Welles and Joseph Cotten — the novella was never intended by the author to be read by the wider public although it was later published with the short story ‘The Fallen Idol.’ Set in post-war Vienna, where, like Berlin, the country has been split into four zones that roughly correspond to the Four Allied Powers, the plot follows the trials and tribulations of down-and-out novelist Rollo Martins. Having attended the funeral of his friend and idol, Harry Lime, Martins is determined to exonerate and avenge Lime when he discovers the suspicious circumstances surrounding his death. Despite the author’s reluctance to publish it, The Third Man is a gripping and haunting thriller that is sure to stay with the reader long after the final page has been turned.