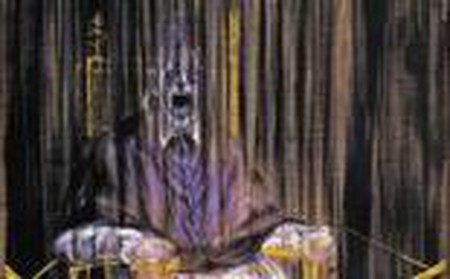 Anglo-Irish artist Francis Bacon spent his career producing paintings which were simultaneously horrifying and beautiful, and which, as Federico Rosa attests, express both existential torment and physical sensuality in a way that few artists before, or since, have managed.

© Francis Bacon, Three Studies for Figures at the Base of a Crucifixion, 1944/WikiCommons

The British painter Francis Bacon (1909-1992) produced some of the most potent and disturbing images in the canon of Western painting. His first major work is considered to be Three Studies for Figures at the Base of a Crucifixion, finished within just two weeks in 1944. When first exhibited in 1945, just two months after the end of the Second World War, the painting caused a mixture of horror and shock. It is not hard to see why: it displays in three panels, a traditional format for religious pieces known as a ‘triptych’, anthropomorphic figures that have no beginning or end; phallic, grotesquely distorted forms with protruding limbs, gaping mouths with countless teeth, figures isolated and trapped, howling or screeching in anguish. Perched against a bizarre, garish, orange background, these creatures were unlike anything the British art scene of the 1940s was prepared for, especially considering the fact that their largest armed conflict to date had only recently come to an end with terrifying consequences. Bacon’s intent, however, was not merely to scandalise gratuitously; it was the culmination of many years of experimenting, to most effectively depict the human figure in existential distress, borrowing from Surrealism, film, photography, and old master painting techniques.

Bacon’s peripatetic lifestyle, which had exposed him to decadent Berlin during the Weimar Republic, and to Paris during the surrealist movement’s heyday, where he encountered Pablo Picasso’s anthropomorphic paintings, Sergei Eisenstein’s Battleship Potemkin, and Luis Buñuel’s Un Chien Andalou, artworks that were also to have a decided influence on the artist. 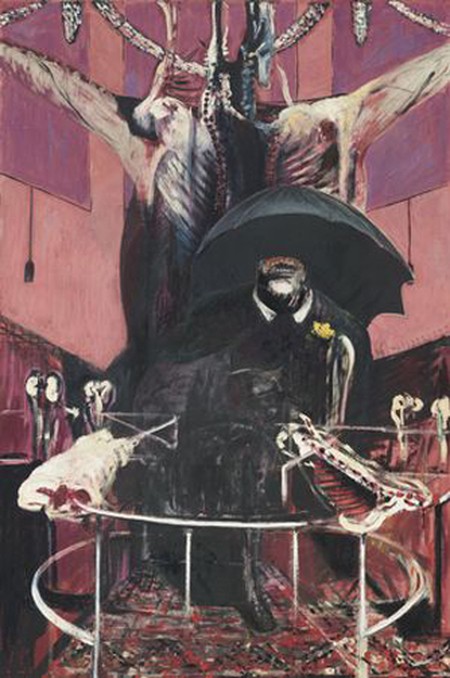 Earlier in his career, Bacon had started as an interior designer, even gaining some notoriety among London’s aesthetes. By 1944, however, with the culmination of the triptych of Three Studies for Figures at the Base of a Crucifixion, Bacon would leave his other pursuits and focus on his principal subject matter for painting: the human figure. In his 1946 painting, one of his most disturbing paintings, we see an isolated figure under an umbrella, against a ghastly landscape, encircled in metal tubing, where flanks of butchered, bloodied animal flesh hang, and bones seem strewn about. That such a horrific image could even be conceived, and brought to an effective pictorial composition is an astonishing feat. This pictorial horror show belies an image of profound psychological impact, a blend of cinema, photography, and painting that befuddles the senses, and is above all that which had eluded most art since Vincent Van Gogh: physical presence. In this sense, Bacon was much more of a sensual painter than he is given credit for, slathering, splattering, glazing, carving, pushing and pulling paint in order to achieve the greatest sensorial as well as visual impact.

Far from being repulsive, the pictures can be inviting and seductive if we concede that humanity is caught between terror and beauty, and that perhaps these abstracted, tortured, flayed figures can be representations of more than just glib phantasmagoria; they are evidence of an artist who is sensitive to the folly of humankind, and to the sensuality of bodies. 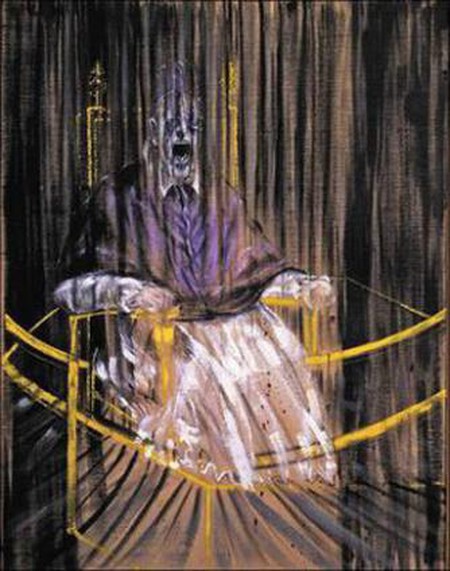 It should also be noted that Bacon always attempted to maintain his paintings in the Western tradition, best exemplified by his multiple versions of paintings, based on Diego Velázquez’s Pope Innocent X. In Bacon’s versions, however, the skull is almost completely effaced, leaving only a gaping mouth, widening in slow motion, and finally frozen in a moment where the figure seems to be in the process of screaming the most anguished of yawps, and his surroundings seem to be empty space, or perhaps a diluted or scorched celluloid film in the process of disintegrating. Bacon chose to execute this painting in oil, even if other technologies existed, because he primarily saw painting as the medium for maximum expression of the human body par excellence, where physical contact with the artwork is fundamental, and an acute sensitivity to the slightest of nuances is essential. In this sense, Bacon remains one of the most refined painters of the past century, owing as much to Picasso, as to Van Gogh or Velázquez and studying their methods incessantly. His most favoured painting, however, remained Nicolas Poussin’s Massacre of The Innocents, in which a horrified mother howls as her baby is being abducted to be put to the sword. This scene, as well as the nurse screaming on the stairs in Eisenstein’s Battleship Potemkin, are fundamental to Bacon’s seizure of the human figure in this most basic of expressions, and the depiction of the organ that emits its sound. By playing with composition, space, colour, light, the artist attempts to transmogrify the real into the metaphysical, and the existential into the sensual.

It should also be noted that Francis Bacon also realised the importance of chance in both painting and life, being a compulsive gambler, and a fairly superstitious person. Many of his paintings relied on accidents that were then built upon with tact and caution, and his belief in the ‘controlled accident’ makes all of the elements he absorbed during his raucous lifetime both contradictory and fascinating. If anything, the very paradox of existence remains in these horrifying, yet beautiful images. His figures, seemingly trapped in ghostly geometric shapes, lying in beds, wrestling on the ground, contorting their craniums, their flesh in perpetual ebbs and flows, lit by lonely light bulbs, are constant reminders of the frailty of being human in an age where isolation from our own sensual reality is ever more limited.