The Best Family-Friendly Hotels in the UK 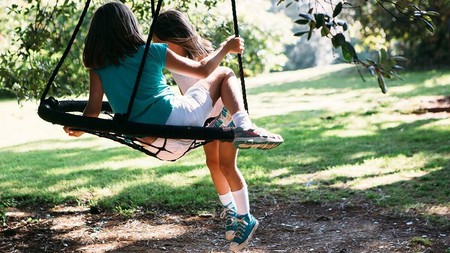 There are many reasons to spend time exploring the UK with family, whether you’re in the market for outdoor exploration, mooching around bustling city centres, zipping around theme parks or having fun on the beach. Finding a family-friendly hotel is often a challenge in itself, and you can end up with something functional, but boring. We’re here to help. Here are our picks for the most interesting and comfortable family-friendly hotels in the UK. 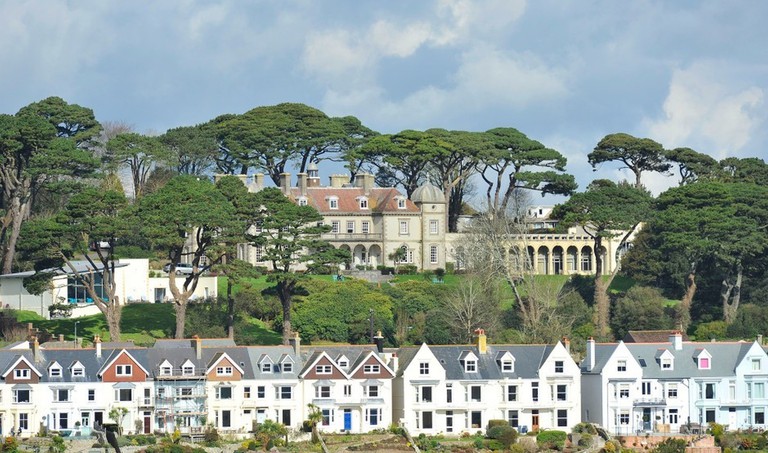 Courtesy of Fowey Hall / Expedia.com
View Rooms
Fowey is about as idyllic a Cornish village as you’re likely to find, sitting at the mouth of the river that is its namesake, lined with cottages and alive with fishing boats most of the year. Fowey Hall almost seems like the crown jewel, a Victorian manor overlooking all the other houses. A short walk from the hotel takes you to the beach, the ferry to neighbouring Polruan or the Fowey Aquarium. Inside the design is bright and inviting, with several children’s playrooms, a well-stocked library, games room and spa with a pool. Outside there’s a Wind-in-the-Willows-inspired play area (the manor is thought to be the inspiration for Toad Hall) and a zip wire. The rooms are big and airy, with a maritime theme that extends to the colourful kids’ bunk beds, and the restaurant offers a sprawling menu of Cornish classics and child-friendly bites. The hotel offers two hours of free childcare each day and a ‘baby listening’ service in the evenings.
More info 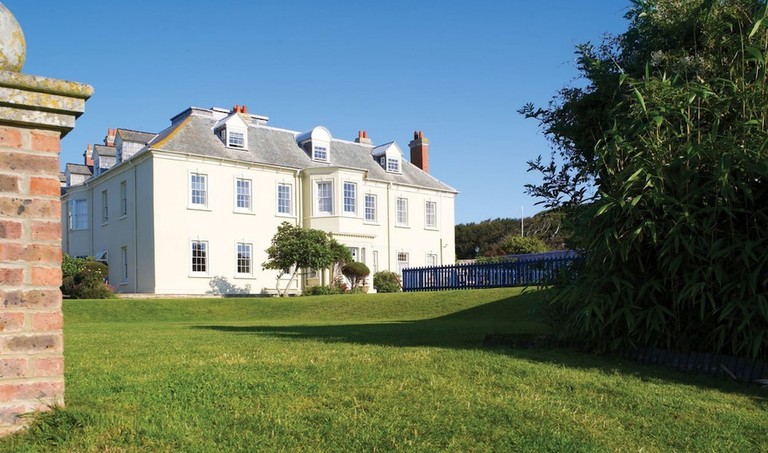 Courtesy of Moonfleet Manor/ Expedia.com
View Rooms
Few things in this world are more likely to get kids excited than dinosaurs, which is probably why the Jurassic Coast is such a favoured holiday destination. Moonfleet Manor sounds like the setting of a sci-fi TV series, but in fact it’s a coastal manor-style hotel with a family-first ethos. As well as being a hop, skip and a jump from Gore Cove beach, it houses a crèche, indoor play area, two swimming pools and even a family escape room. Adults aren’t left behind either, with a sauna and Edwardian-style bar. The beach-view restaurant offers continental European and British dishes, plus the obligatory ‘catch of the day’. There are kid-friendly meal times on offer and a nanny-led breakfast club on Sundays. Rooms vary in style between classic and contemporary, with a focus on function over frills.
More info

Courtesy of Bedruthan Hotel and Spa / Expedia.com
View Rooms
In the surfer-friendly Cornish town of Newquay, Bedruthan takes a more colourful, modern approach to the coastal holiday. The beach is yards away, and the interior and grounds resemble a kind of post-modern villa complex, with circular outdoor swimming pools and pastel Cubist furniture. There are cosy relaxation lounges, a spectacular hydro-spa and sensory spa garden, and another indoor pool to go with the three outside. There are also two restaurants – the family-oriented Wild Cafe and the more adult Herring. Family rooms can either include bunk beds or separate interconnecting bedrooms, depending on how much privacy you’re after.
More info

Polurrian on the Lizard, Cornwall 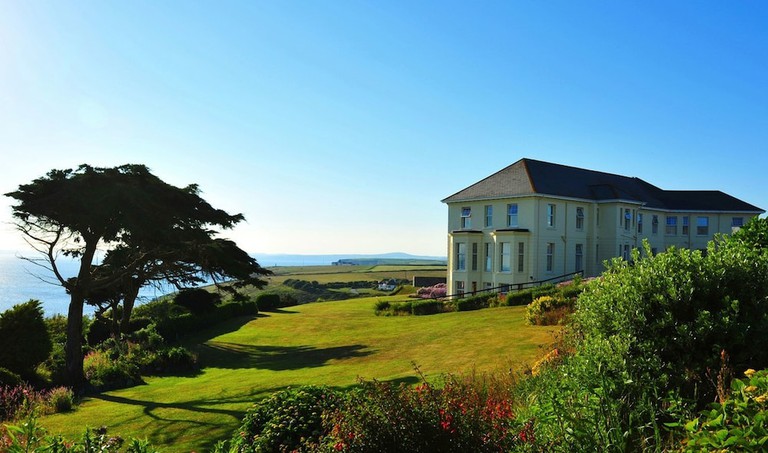 Courtesy of Polurrian on the Lizard / Expedia.com
View Rooms
The Lizard is an ideal place to visit if you value seclusion on your family holidays: a bit more of a mission than some other Cornish spots, but worth it for the amount of tourists it filters out this way. The Polurrian sits right on top of the cliffs, gazing down onto the inviting private beachfront beneath. The terrace has a sprawling children’s play area, and there is also a film room and Cornish Piskie Trail. Down on the beach you can borrow buckets, spades and crabbing lines to keep the little ones occupied while you are lounging, or swimming in the sea, before coming back for a spa treatment or a nice meal at the fish restaurant. Rooms have a contemporary vibe that capitalises on the space, to ensure you have a comfortable stay. Baby monitors are available to borrow and you can also organise an in-house babysitter.
More info 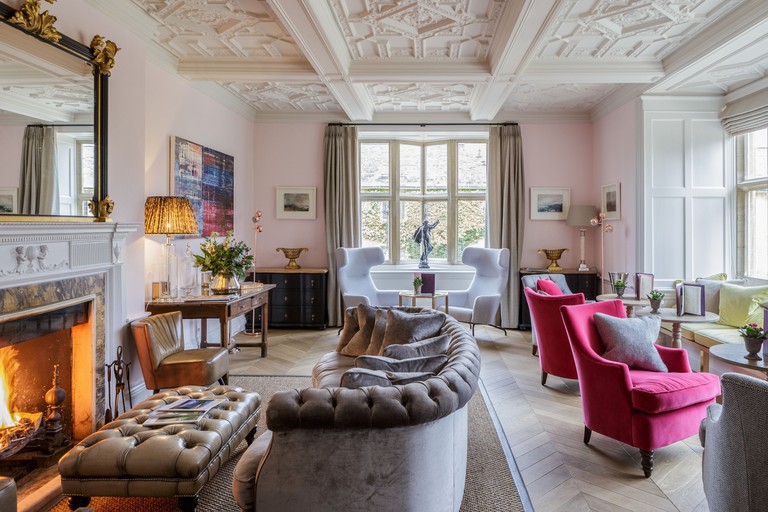 Courtesy of The Slaughters Manor House / Expedia.com
View Rooms
The nature of the area means that most of the hotels are quite old-fashioned and austere, but 17th-century Slaughters Manor undercuts all of that, with bright colours, Scandi-style furniture and welcome additions like gardens for the rooms. Food options range from a sophisticated seven-course taster menu to a cost-effective bar menu. There’s a tennis court on the grounds and a billiards table for rainy days.
More info 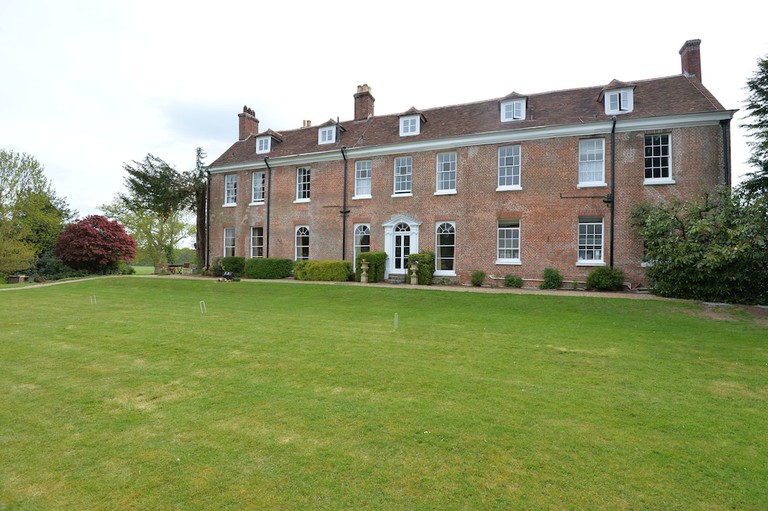 Courtesy of New Park Manor / Expedia.com
View Rooms
For anyone going on holiday via London, the New Forest is a great escape from the city, less than 2 hours by car or train. Peppa Pig World, various cycling and hiking trails, a railway museum and a glut of country parks are all within easy reach, and New Park Manor is nestled right in the middle of it all. The hotel’s claim to fame is that it was King Charles II’s favourite hunting lodge in a previous life, and much of the 17th-century appeal has been retained, but with the addition of a cinema room, pool, badminton courts and croquet lawn. The rooms, named for various former residents, are artfully decorated and agreeably spacious, and many are outfitted with terraces and free-standing baths. Bicycles can be rented for exploring the surrounding area.
More info 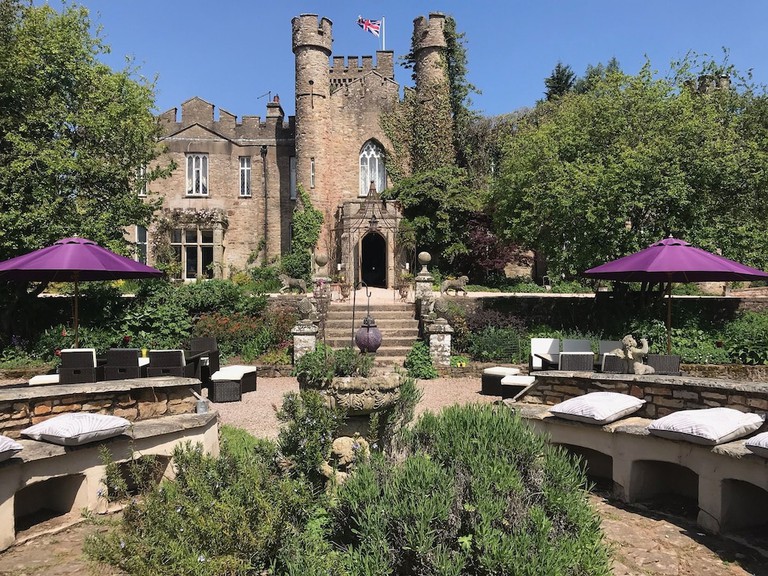 Courtesy of Augill Castle / Expedia.com
View Rooms
Want an easy way to tempt your kids into embarking on a British holiday? Simple, tell them they can stay in a real castle! Unlike other hotels that adopt the title, Augill Castle is every bit the medieval monument you’d hope for, with turrets, battlements and a big portcullis-style entryway. Sitting right between the Lake District and the Yorkshire Dales, the hotel goes well out of its way to cater to families, with a playroom, cinema room, honesty bar and 20 acres of grounds with roe deer and hens wandering around freely. Rooms have a classical Edwardian vibe, with the odd upcycled light fixture or old typewriter, and some of the larger ones feel like houses unto themselves. Food offerings range from full three-course meals to more esoteric pub-style grub.
More info 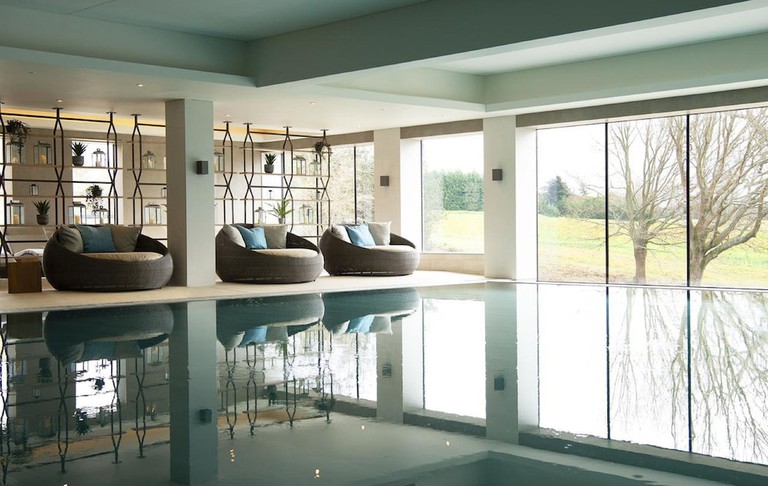 Courtesy of South Lodge Hotel / Expedia.com
View Rooms
With 93 acres of surrounding forest and gardens, South Lodge really is a self-contained experience, and just a 20-minute drive from Gatwick Airport or just over an hour from London. This 19th-century manor house is a marvel to behold both inside and out, but don’t worry about the kids getting bored while you gawp at the architecture and soak in the incredible spa. As well as secret woodland to explore, there is croquet on the lawn, bikes to borrow for free, dedicated children’s ‘splash times’ (in the indoor pool and wild swimming pond), a well-stocked toy trunk and welcome packs for under-12s. There are two child-friendly restaurants: award-winning Camellia, which serves seasonal local ingredients and a special kids’ menu, and Mediterranean-inspired spa restaurant Botanica, where robes can be worn until 6pm.
More info 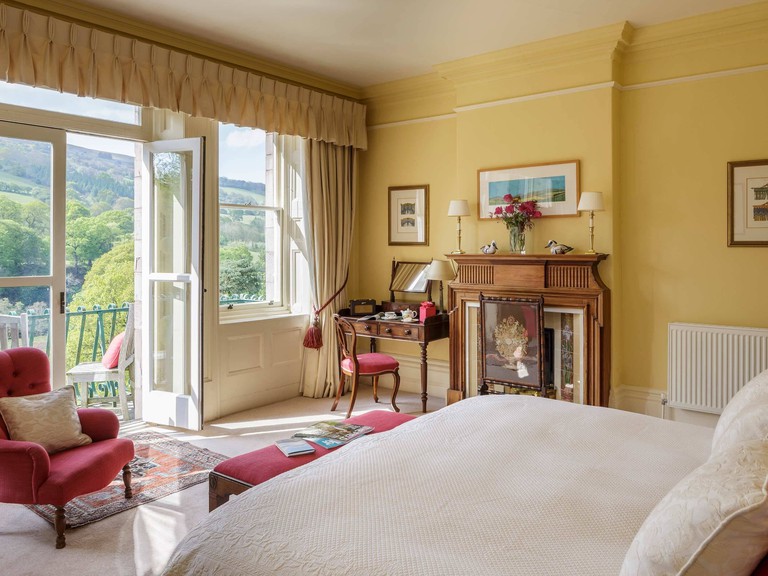 Courtesy of Gliffaes Country House / Expedia.com
Book Now
The Brecon Beacons offers one of the most Tolkien-esque vistas in all of the UK, just crying out to be explored and enjoyed. Finding somewhere to stay that embodies that adventurous spirit is important, and Gliffaes certainly achieves that. Wedged between the Black Mountains and the River Usk, the 19th-century Italianate mansion and surrounding grounds have a romantic vibe to them, up to and including croquet on the lawn, a tandem bicycle to use for free, and bespoke picnic bags for hiking and fly-fishing courses. Insider tips on the best walks in the area are provided at the front desk, and you can go on a ‘tree walk’ around the hotel arboretum without ever leaving the grounds. Rooms carry on the vintage feel, but you’ll likely be distracted by the astonishing views. The restaurant offers a versatile selection of locally-sourced dishes with lots of options for vegans and vegetarians. 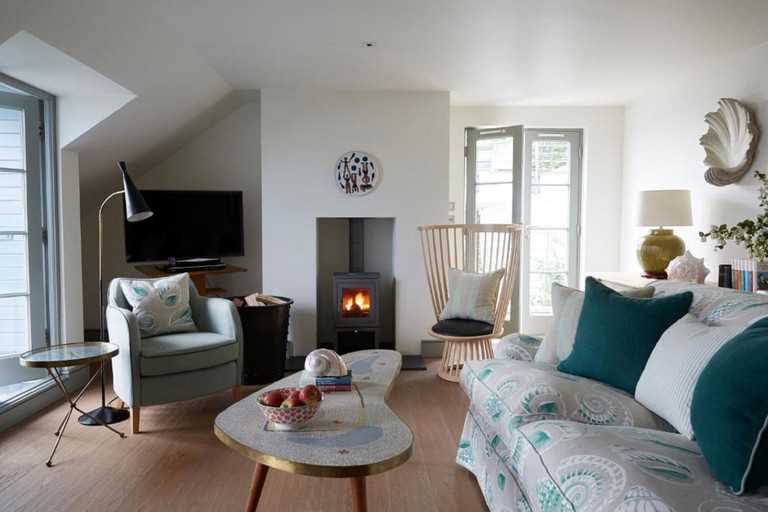 Courtesy of Hotel Tresanton / Expedia.com
Book Now
St Mawes sits on the edge of the Roseland Peninsula, an area that really exemplifies the sub-tropical appeal of Cornwall. The hotel itself is actually a cluster of cottages, making up 30 different rooms, all of which come with astounding views and plenty of space for children to mill around. There’s a kids’ art club and organised games on the beach in the summer holidays, and even a private yacht that can be booked out for trips during high season. The seafood-heavy restaurant menu favours Mediterranean-style dishes with local ingredients and meals can be enjoyed in the rooms (or on the terrace gardens that many of them come with). There are four dog-friendly rooms. 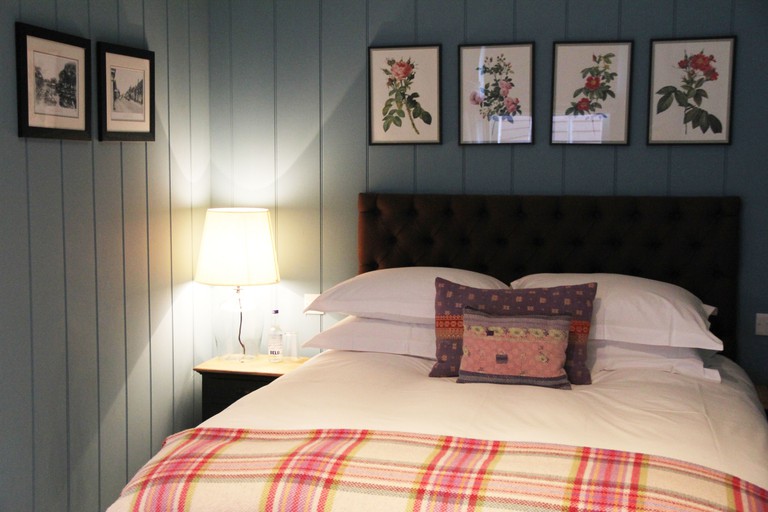 Courtesy of Bel and the Dragon / Expedia.com
Book Now
With a name sounding like a storybook, it’s hardly surprising that this Hampshire gem is well suited to visiting families. Just 40 minutes from London, it’s an ideal country spot to migrate to after a spell in the big city. The hotel is essentially an outsize pub, with hard-wearing wood panelling, heavy furniture and big fireplaces. Rooms are cleverly designed to tuck children away in a little nook so the parents can enjoy a private-ish experience at a more reasonable price than usual. There’s a hearty menu at the restaurant, with a kids’ list that’s almost as big as the adult one, and the bar has an extensive wine list for pre-/post-dinner drinks.
Give us feedback