Ealing Studios Was More Than A Laughter Factory 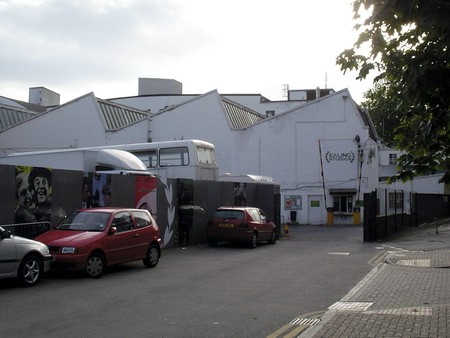 Ealing Studios in West London was once the home of English comedy films. But the famous production company made important dramas, too, as was revealed by the 2012 BFI Southbank retrospective Ealing: Light and Dark.

The streets of war-torn London loom before us, rubble spilling onto the pavements like forgotten dice. It’s Sunday morning in Bethnal Green and the rain has just begun to fall. So begins 1947’s sdark drama It Always Rains on Sunday, directed by Robert Hamer.

A powerful film about London’s East End and the men and women who live there, It Always Rains on Sunday is the embodiment of the late 1940s cultural zeitgeist. In this film one sees the concepts surrounding the traditional family structure begin to crumble. Gender norms and assumptions crack under the stress of the post-war era. Youths navigate new romantic labyrinths, the government and its law keepers are recast as villains, all against a backdrop of unobtainable love.

Googie Withers delivers a great performance as Rose Sandigate, a housewife, mother, and friend, trying to juggle her present with her past in a profoundly symbolic performance for the British mindset. Yet it is not just her battling her own demons on these East London streets; murder, theft and adultery fall upon the characters as often as the rain does in this classic film from Ealing Studios.

Most often remembered for its whimsical comedies, Ealing Studios also produced challenging and provocative film noirs and dramas, subversive sci-fi films, and an array of propaganda shorts and documentaries. Many of these surprisingly radical films have been forgotten by the passage of time. For this reason the BFI put together a two-month retrospective at the BFI Southbank. Ealing: Light and Dark celebrate both the light and frivolous as well as the dark and insidious films this celebrated studio produced in its heyday between the late 1930s and the late 1950s.

The retrospective, which featured 35 of the 95 films produced at Ealing under the leadership of Michael Balcon, was augmented by the national re-release of It Always Rains on Sunday and the publication of a book called Ealing Revisited, a collection of essays on how Ealing changed the face of British and world cinema.

It was under Balcon’s direction that the studio produced some of the most famous and influential cinema to come out of the UK. Passport to Pimlico, The Blue Lamp, The Ship That Died of Shame, are just a few of the films that carved out a corner in the British consciousness. They explored with raw intensity the audience’s desire for films dealing with the austere and turbulent post-war era. They challenged authority through a heady mixture of frivolous frothy dialogue and expert cinematography.

This is due in part to the tremendous talent behind the film that Balcon was able to gather. Numerous English directors, including Charles Crichton, Alexander Mackendrick, Robert Hamer and Alberto Cavalcanti, worked with Balcon at Ealing to produce these sensational films.

Additionally Balcon gathered around him and his team many famous actors of the day including, Diana Dors, Alec Guinness, Stanley Holloway, Michael Redgrave, Maggie Smith and Audrey Hepburn, many of whom, got their start or were constants in the Ealing Studios family.

Perhaps it is because of its enduring cultural legacy, and its synthesis of so much great British talent that Ealing studios, or more precisely ‘Ealing comedy’ has become almost an idiomatic expression for the embodiment of all things British. Quirky, witty, charming, dapper and always endearing, Ealing Comedies are constant mainstays on television and old cinema nights. Films such as The Ladykillers (Alexander Mackendrick, 1995) Kind Hearts and Coronets (Robert Hamer, 1949) and The Lavender Hill Mob (Charles Crichton, 1951) hardly ever seem to have gone off the air since they were made. Yet the power of the BFI’s retrospective season is it will invites viewers to connect with the darker side of Ealing Studios whilst also rediscovering some of its classic comedic gems on the big screen.

For those Ealing aficionados who have already seen most of the full length feature films produced at the studio, the Propaganda Shorts, which are available for viewing around the UK in the BFI mediatheques, offer a unique opportunity to explore the thirty-some-odd shorts the studio produced between 1939 and 1946. Many of these shorts have not been shown since they were last played in the 40s and they provide a unique insight into war torn England and her propaganda machine. Shorts such as Did You ever See a Dream Talking fuse comedy genius and War Savings Bond information into an enjoyably farcical fusion.

Additionally the Book tie-in, Ealing Revisited edited by Mark Duguid, Melanie Williams, Keith M. Johnson and Lee Freeman, is an in-depth and explorative look at the unknown and forgotten sides of Ealing Studios. With essays focusing on everything from her more famous films to exposés on the artists who helped craft Ealing’s voice, this book promises to fuse popular culture and academic discourse into one synthesised discussion of Ealing’s impact from the late 30’s through to today.

Finally the BFI Southbank also produced an Ealing Studios Exhibition. Gathering material from a diverse body of collections, the exhibition was filled with in house memos, shooting scripts and storyboards, on set photographs, costumes and publicity material. The quirky and colourful vintage press campaigns were sure to garner the most interest as not only did they highlight Ealing’s unique flair, but also many of the posters were designed and illustrated by famous artists of the time. Balcon used artists such as John Piper, Edward Bawden, James Boswell and Edward Ardizzone amongst others to create the unique and memorable publicity brochures and posters Ealing is remembered for.

Perhaps it is because the post war period was such a time of uncertainty and confusion that we choose to look back through the lens of time and remember Ealing for its comedies and escapism. What this retrospective gives us however, is the motivation to reclaim our past and celebrate the artistry and skill through which Ealing studios managed to explore all aspects of 40’s and 50’s Britain. A truly unique experience, this retrospective gives us the opportunity to slip into our own past, and by doing so, see the future more clearly.